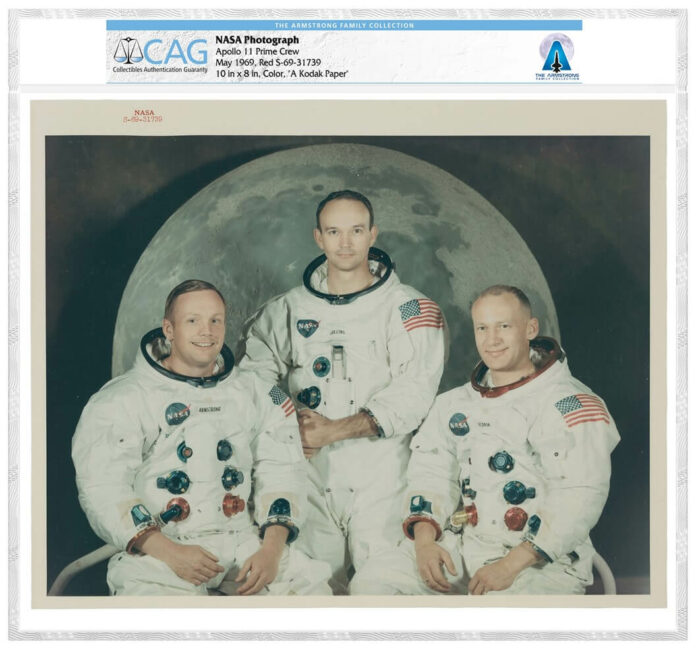 Bidding is underway for several hundred artifacts that Collectibles Authentication Guaranty(TM) (CAG (TM)) certified from the Armstrong Family Collection(TM). The collection, which is entirely certified by CAG, features items saved by astronaut Neil Armstrong – the first man to walk on the moon – and his immediate family members. They are being offered by Heritage Auctions as part of a larger sale of space memorabilia May 9-11.

One of the highlights of the upcoming May sale is a CAG-certified US flag that was taken on the historic Apollo 11 mission. Measuring 11.5 inches by 18 inches, this is the largest flag that was taken on this mission, which famously brought Armstrong to the moon.
Bidding begins at $75,000 for this extraordinary item, and it is likely to go much higher. In November, during the first auction of items from the Armstrong Family Collection, a CAG-certified flag of similar size realized $275,000, a record for a flag flown on a space mission.
CAG is an expert and impartial certification service that works directly with collectors, estates, artists, museums and others. The company’s services preserve the authenticity and provenance of collectibles, memorabilia and estate items at the source.
“CAG was instrumental in helping us to organize, preserve and protect the Armstrong Family Collection for generations to come,” said Mark and Rick Armstrong, Neil Armstrong’s sons.

The May auction also includes pieces from the Wright Flyer, which launched the era of powered flight in 1903 with the famous flight of Wilbur and Orville Wright. Under a special arrangement with the Air Force Museum, Armstrong took material from the historic airplane with him on Apollo 11 and was allowed to retain a portion of it, including pieces of the wing and propeller.

Six CAG-certified Wright Flyer wing pieces and three CAG-certified Wright Flyer propeller pieces are being offered in the May auction, with starting bids ranging from $17,500 to $35,000. Bidding is likely to go much higher, as the two propeller pieces offered in November were sold for $275,000 each, while the wing pieces realized prices from $112,500 to $175,000.

The authenticity and provenance of these pieces has been certified by CAG, giving buyers – and future buyers – confidence that they are from the Armstrong Family Collection. Like the flags, the Wright Flyer pieces are encapsulated in transparent and tamper-evident holders, as are many of the other items from the collection. (A photo certificate is included for any item that CAG could not encapsulate in a holder.)

Another item expected to post an impressive price realized is a CAG-certified Apollo 11 Quarantine Cover, a postal collectible signed by the crew. It was flown on the mission and is stamped “DELAYED IN QUARANTINE AT LUNAR RECEIVING LABORATORY M.S.C. – HOUSTON, TEXAS.” (The Apollo 11 astronauts spent more than two weeks in quarantine to ensure they had brought nothing harmful back from the moon.)

The May auction also includes four Apollo 11 Robbins Medals that were flown on that mission. The Robbins medals were specially struck for the astronauts to take with them into space as mementos of the mission, and were engraved with the mission dates upon their return to Earth. The Apollo 11 Robbins medals feature the famous image of an eagle landing on the moon, which was adapted for the Eisenhower dollar in the 1970s.

In addition to being certified by CAG, these medals were graded by Numismatic Guaranty Corporation (NGC), an affiliate of CAG. NGC is a leading grading service for coins, tokens and medals, having graded more than 43 million of them since 1987.
These four Apollo 11 Robbins medals are graded between NGC MS 65 and NGC MS 67. In addition, the auction includes Robbins medals from the other manned Apollo missions in 1968 and 1969 (Apollo 7, 8, 9, 10 and 12). They are graded between NGC MS 66 and NGC MS 67.
In addition, four Gemini 8 Fliteline medals, similar to the Robbins medals, are part of the May sale. Now certified by CAG and graded by NGC, these are among the items Armstrong took with him on his only other trip to space. That March 1966 mission was the first docking in orbit, but it took a dangerous turn before Armstrong was able to stabilize the Gemini 8 capsule.
“As we get closer to the 50th anniversary of the triumph of Apollo 11, the excitement is building for collectibles connected to that daring mission and the heroes who completed it,” says Mark Salzberg, chairman of CAG and its affiliates. “Not only does CAG guarantee the provenance of the items it has certified, its holders make these items easier to buy and sell in the future, without losing their important provenance.”
Other CAG-certified highlights from the May auction include:

To learn more about CAG and its certifying services go to the CAG website, further information on NGC is available here.

March, 4. 2021
2020 was the year of the pandemic, but has boosted online sales. Heritage Auctions reports a growth of the company, total sales of $873,117,274 with $278.9 million by the numismatic market alone and internet bidding at a record height.
error: