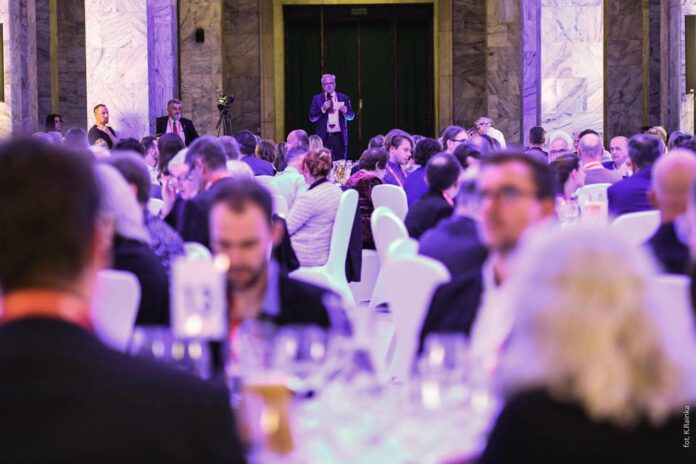 There’s no other way to put it: everyone was euphoric when the 800 numismatists from 46 countries met for the opening ceremony at the University of Warsaw’s Aula Maxima. Finally, it actually did start: the International Numismatic Congress (INC), although many obstacles had to be overcome to get to this point.

An Amazing Organiser and an Overabundance of Obstacles

In 2015, Aleksander Bursche, Professor at the University of Warsaw’s Faculty of Archaeology and an internationally renowned expert in Migration Period coinage, took on the task of organising the congress. Together with an outstanding team, he set about planning an INC of superlatives and innovations. Due to its geographical position, Poland offered the ideal opportunity to bring scholars from the West and the former Eastern bloc closer together. After all, the scope of research of many numismatists is still limited by the Slavic language border. Since many Russian colleagues often couldn’t afford to attend the usually expensive congresses in Italy, the United Kingdom or Spain, Aleksander Bursche focused on sponsors who were willing to cover the travel expenses of dozens of colleagues.

And then came Covid. Aleksander Bursche’s team was quicker to make their decision than most: as early as in the summer of 2020, they postponed the INC to 2022 to prevent the risk of everyone having to change their plans at the last minute. And this would have worked – if Russia hadn’t invaded Ukraine, calling everything into question. Whereas the organisers had initially hoped that it would be possible to separate politics and science during the congress to socialize on a personal level with colleagues of a despotic regime, this hope was devastated when the Polish government prohibited Russian scholars from entering the country.

It’s quite likely that there would have easily been more than 1,000 participants at the XVI Congress in Warsaw, if it hadn’t been for the absence of Russian colleagues and of all the others for whom the Polish border was way too close to the war zone. Many decided not to participate and informed the organisers about their decision. Aleksander Bursche and his team reacted immediately: for the first time ever, a streaming platform was set up for the entire International Numismatic Congress, enabling those at home – for the regular registration fee – to listen to all sessions and to participate with their own paper. This service will also be helpful to scholars who did attend in person as scheduling conflicts couldn’t be avoided given the sheer number of about 700 presentations.

700 Presentations or: Is Numismatic Training Going in the Right Direction?

Numismatics is one of a few fine arts subjects that would virtually guarantee its students secure employment – if numismatic training wasn’t so limited at many universities. Once again, the INC programme clearly demonstrated this. Anyone who looked at the scientific programme found that ancient coinage was completely over-represented, and that most presentations on this subject dealt with coin hoards and coin circulation. In other words, most of today’s numismatists do their research in fields that can be used at universities and at institutions that deal with the preservation of archaeological monuments – the very areas in which an increasing number of positions have been cut in recent years. Museums and research departments of auction houses, on the other hand, are in need of numismatists with a broad knowledge who also know how to handle modern coins. One may wonder whether this topic shouldn’t be put on the agenda in the interest of young people who would like to plan their lives based on a fixed position and a fixed salary. It would be nice if numismatists at a future congress could take the ideological blinders off and discuss how numismatic training must be organised to ideally prepare students for the various fields of numismatic work.

The presentations clearly showed the willingness, even the enthusiasm of the scientific community to make use of all the new possibilities to promote digitization and networking. In this way, Alan Stahl’s keynote lecture wasn’t the only event focusing on a database on ancient Antioch, numerous round tables and individual presentations did so, too. It was really impressive to find out what possibilities of cooperation various digital tools offer today.

Supported by the Coin Trade

The wonderful receptions at the beginning and the end of the congress, the Gala Dinner and the truly irreplaceable tent for breaks, where many fruitful conversations were held over coffee, tea, soft drinks and gingerbread, were financed by the coin trade. The most important sponsor was Samlerhuset. In his speech at the Gala Dinner, Ole Björn Fausa, founder and main shareholder of the Samlerhuset Group, demonstrated to the numismatists present that scholars aren’t the only ones who are committed to major ethical values. Samlerhuset has been supporting Fairmined since 2016, an initiative that seeks to improve working conditions in gold mining. After all, much of the gold that is used for computers, smartphones, jewellery – and, of course, coins – is from mines where people work under conditions that no one should have to work under these days.

CoinsWeekly also decided to sponsor an event for the first time since its founding – as a small, modest sponsor, of course. That’s why all the shirts of the many helpers who made sure the congress ran smoothly were emblazoned with the small logo of CoinsWeekly.

The most important sponsors, Samlerhuset, Künker, the IAPN and of course also CoinsWeekly, had tables in the exhibition area, where lively discussions with scholars from all over the world were held.

A New President and the Next Conference Location

On Wednesday, the General Assembly of the International Numismatic Council, which is responsible for organising the congress, took place. The most important items on the agenda are always the election of the new board and the next location. We do not want to jump in ahead of an official press release, but we can already tell you that Ute Wartenberg will replace Michael Alram as President of the INC.

Frankfurt will be the location of the next conference, and Fleur Kemmers will be in charge of the organisation. The conference is scheduled to take place in 2027, making up for the year lost to Covid and choosing the year in which the International Numismatic Congress celebrates its 100th birthday.

It cannot be said too often: the INC isn’t primarily about science, despite the about 700 presentations. It is the best of all opportunities to get to know colleagues. And that’s important! Effective numismatic research is only possible thanks to close cooperation.

Especially for younger participants of the congress, the friendly atmosphere was a special experience. There are virtually no more Covid restrictions in Poland – which is why all fears of contracting the virus were forgotten after a few hours. Long-missed pub visits suddenly became normal evening activities again, an opportunity that numerous congress participants seized with enthusiasm! I am happy for each and every one of them. Our young colleagues have had to do without these pleasant aspects of research for far too long. However, this light-heartedness also has consequences. One member of the CoinsWeekly team contracted Covid in Warsaw – we hope that the entire team won’t get ill.

Anyway, CoinsWeekly will surely be there at the next congress in Frankfurt. We stand up for our belief that numismatics has many equal participants: collectors, dealers, curators and scholars.

On our landing page for the congress, we posted pictures of many numismatists who visited us at our table in Warsaw. Here you can find the pictures.

We hope that we will soon be able to provide you with the possibility to download our pictures as well as those of Künker and Samlerhuset.

If you want to see if there was a lecture in Warsaw for your field of research, you can find the INC programme here.

This is the website of the International Numismatic Congress in Warsaw.

And this is the website of the International Numismatic Council.

One of the most important tasks that are accomplished for every congress is compiling the survey that includes all numismatic works that were published in the past six years.

If you want to know about the members of the International Numismatic Council, here you can download the last Compte Rendu of 2019.

There are said to be a few INC medals left, we explained what they look like and where to get one.

INC Statement on Putin’s Aggression on the Territory of Ukraine

March, 10. 2022
The Organizing Committee of the XVI INC 2022 condemns Russia’s aggression on the territory of Ukraine. In a statement they made clear what that means for the congress.
error: