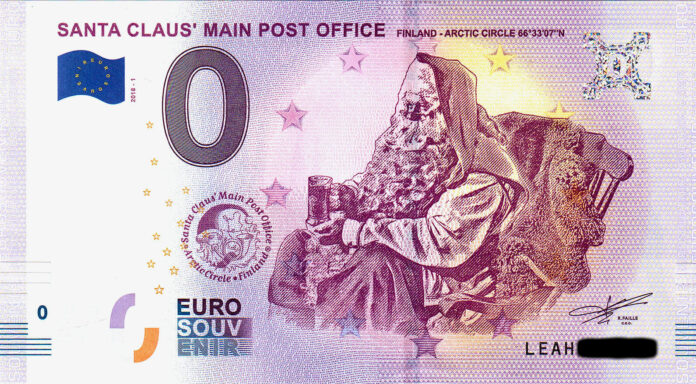 Errors, failures and bad luck – that is what Numiscontrol discovers taking a look at the popular zero euro notes. Actually, this is a good thing for collectors, but in this overview, he takes the liberty to make a few critical remarks. In the first part, you find a table displaying the errors and a few remarks on the earliest erroneous editions.

This brings us to the edition called “30 Jahre Mauerfall” (30th anniversary of the fall of the Berlin Wall), motif 2018-1. This is another example of a case where the author was not indicated properly, and a litigation seemed to arise. In the end, a settlement was reached and a corrected edition featuring the same motif and showing the artist’s name was issued (2018-2). The printing plant cannot be blamed for this error – it was obviously a mistake made by the issuer. In addition, the note was also issued one year too early.

With regard to the edition “Neuschwanstein” (XEBG, 2018-1), things are different. In this case, it had not been taken into account that the word “Neuschwanstein” is also a registered word mark and therefore protected by law. Apparently, there was a legal dispute and the note suddenly disappeared from dealers’ offer lists and from internet auctions. Anyone asking for an explanation hardly got an answer, but what happened?

It is a fact that a law firm gave warnings on grounds of alleged infringement of copyright to companies and private persons. According to these warnings, already the presentation of the zero euro note was prohibited and infringed the copyright of the owner of the word mark. Instead, buying and possessing the souvenir note appeared to be legal!

As a consequence, the note disappeared even from the online overviews of the editions, which were put together with much love and diligence, since they were also affected by the warnings. By now, the note reappeared in the offer lists of some dealers, but it is not known if and what kind of agreement has been reached.

In the context of the Football World Cup 2018 in Russia, collectors were pleased because a whole series of zero euro notes was issued. The German issuer designed a note for each participating country featuring a football player in action together with a landmark of the country. For example, for Germany the Brandenburg Gate was chosen.

Regarding the note for Russia, there was an embarrassing mistake: although the text right next to the building says “Kremlin Moscow”, there was no picture of the Kremlin, but a picture of Saint Basis’s Cathedral in Red Square instead. Obviously, the printing plant could only print what had been delivered. And with an additional portion of geographical ignorance, the embarrassment is guaranteed. Until now, only a few persons might be aware of this fact because the note is still being sold at a very low price. That means that it is a special “insider tip”!

The edition “BERLIN-SIEGESSAULE” can be considered an own goal because it was issued by the EuroSchein-Souvenir GmbH located in Berlin. Apparently, nobody there noticed that the word “Siegessäule” contains an “ä”. Every note of the edition displays the error. Only collectors pointed out the mistake. Nevertheless, the note continues to be on offer.

Another interesting edition is the second edition of the Albrechtsburg Meißen because it exists with errors and without.

A massive print failure occurred, and the results are notes with mutilated motifs and entire details that are not printed on the notes at all. Therefore, it is obvious that the error happened at the printing plant and that nobody there noticed it. When a part of the edition already had been sold, a collector pointed out the print failure to an issuer. But the issuer did not care about it and the sale continued.

Only when the media reported about the massive print failure on the notes and asked the issuer about it, there was a reaction – and, well, let us say it was a quite unusual one: the sale was stopped immediately and the remaining notes were counted and checked for errors. All notes were affected by the print failure! The edition comprised 5,000 notes and 2,886 erroneous notes had been sold already. The other 2,114 notes were reclaimed and sent back to the printing plant in Oberthur. But the notes were not sorted according to their control numbers. The printing plant was only informed about the number of notes reclaimed. And this was an additional mistake.

On the edition for Belgium called “Museum aan de Ijzer Nieuwpoort”, ZEAG, 2018-1, there was a mistake similar to the note featuring the “wrong” Kremlin, since also in this case the motif got the wrong name. It should have been “Museum aan de Ijzer Diksmuide”. The mistake was corrected later, and there are notes with and without the wrong name on it.

In 2018, the Slovak Republic began to issue souvenir notes. Among the landmarks and cultural institutions of the country advertised on the notes, you can find the beautiful capital Bratislava with its famous castle. Unfortunately, also in this case there was a spelling mistake that was only noticed when it was too late. The motif is shown together with the name of the Bratislava Castle: “Bratislavký hrad”. But in Slovenian, the correct spelling is “Bratislavský hrad” – with an “s”! The mistake has not been corrected and therefore the note is popular amongst all specialised collectors.

In the end of 2018, two erroneous editions were printed in Finland. Santa Claus’ Main Post Office at the Arctic Circle attracted attention with two motifs (LEAH, 2018-1). The first motif shows Santa Claus personally, the second one the Post Office. Both might be visually appealing, but once again there is a deplorable spelling mistake. Next to “Santa Claus’ Main Post Office” it is written “Finland-Artic Circle 66°33‘07“N”. I am sure you noticed it already: it should be “Arctic” with a “c” and not “Artic”. It was certainly just a “slip of the pen” because the word “Arctic” is spelled correctly on the stylised stamp. By now, corrected versions of both notes are available that show the same motif and have the number 2018-2.

At the beginning of 2019, the German Spy Museum Berlin located at Leipziger Platz issued an own souvenir note (XEER, 2019-1) with the motif of Glienicke Bridge. After the construction of the Berlin Wall in 1961, Glienicke Bridge was often used for the exchange of spies and agents of the east and the west. At that time, the border was exactly in the middle of the bridge and until today, movies are still being shot at this location.

The note’s motif shows the view from Berlin to Potsdam, as one can tell from the two distinctive centaur sculptures at the beginning of the bridge. On the Potsdam side of the bridge, the sculptures are not there anymore since the end of the Second World War. Therefore, one can identify the perspective unmistakably – nevertheless, the emblem of the German Democratic Republic is in the wrong place.

It should be attached to the posterior iron construction, as historical pictures prove. When questioned about the matter, the issuer confirmed this. The succinct explanation given by the issuer was that the sign was deliberately moved to the front to make it easier to identify it. (The photomontage shows how the note could look like if the position of the emblem was correct.) Unfortunately, now tourists carry a picture of the bridge that is intentionally incorrect all over the world. The issuer has a rather relaxed view on the subject and does not think that he has to stick to the historical facts. Also in this case it is obvious that the printing plant cannot be blamed, there is no print failure.

The different security threads are numerous, and they often vary from note to note even within the same edition. In the future, this topic deserves an own article.

If you want to take a closer look at the zero euro souvenir note editions, you should also pay attention to the micro text on the notes. Did you know for example that the name of every European building shown on the note figures on its reverse in a micro text? Look through a magnifying glass and you will find the names. But also regarding the micro text in the background of the motifs on both sides of the note, there are some particularities to be found.

Since (more or less) the middle of 2018, another particularity is to be found in the hologram. The hologram, which is supposed to show a bird’s-eye view of the Paris Eiffel Tower, was changed. Therefore, one can say that there are two different versions of it. In the editions issued before the middle of 2018, the “0” was covered in shining foil – now it is not. There are notes issued in 2018 and being part of the same edition that have different versions of the hologram.

Within a short period of time, the zero euro souvenir notes became a popular collection area. These examples show how many deviations and errors can occur. Presumably, there are many other errors that nobody noticed yet. Therefore, take a close look at the motifs and operate in function of a quality inspector of the zero euro souvenir editions!

Here you will find part 1 of “Errors on zero euro notes”.

February, 4. 2021
Are you a coin collector, not a banknote collector? Finland’s new 0 euro banknotes combine both passions: three series are dedicated to the country’s rulers and presidents – and feature their coins. Our author numiscontrol presents the new issues.
error: