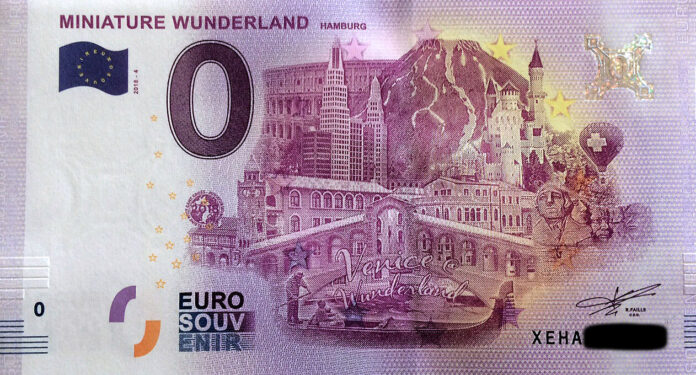 Whether it be in Germany, Europe or overseas: the demand for zero euro souvenir notes is booming. The good old postcard had to retreat in shame. The zero euro note dominates. But sometimes, during the planning process or afterwards in the security printing plant located in Oberthur (France), small errors or print failures occur, which will only be noticed later by attentive collectors. Such notes are of particular interest – also from the financial point of view! Therefore, specialized collectors have to look for misprints, just as they do when it comes to coins. In the case of errors spotted in the printout, the issuer initiates a correction and issues corrected notes – often only a part of the entire edition – with the same motif. Therefore, there are notes featuring the same motif with errors and without.

By summarising the errors, misprints and shortcomings of the notes issued so far, I would like to give you an impression of the special world of the German zero euro souvenir editions and broaden the perspective on this topic.

When the first note was issued in Germany (Zoo Duisburg XEFV 2016-1) in 2016, the reverse had directly been adapted to the “European context” – after all, only French buildings dominated that part since 2015. Besides the Eiffel Tower, it featured then also Big Ben, the Brandenburg Gate, the Colosseum, the Manneken Pis and the Sagrada Familia. In June 2017, Big Ben was replaced by the Torre de Belém, probably as a reaction to the Brexit planned by Great Britain.

After a rather modest start in Germany with only thirteen editions in 2016, the production then hit the ground running. The catalogues published in the autumn of 2018 that were supposed to give an overview of the notes are already outdated.

In Germany, many want to have a souvenir note with their own motif produced for a special occasion. Many collectors moan when once again the production of twelve new motif editions is announced, but it appears that the issuers do not have to worry about a shrinking demand. Often, some collectors show up at the location where the notes are issued to buy 300 notes and more. In the internet, the new collection area is thriving as well, particularly when special zero euro notes are on offer. And there are some of them: misprints and errors that are the result of faulty printing plates – whether or not they were produced on purpose. In addition, there are curious pictures that are supposed to depict an original but actually do not do so.

There is a large variety of errors of all kinds, you only have to spot them. In some cases, not all rules were adhered to in the process of choosing the motif and a legal litigation arose or could still arise. Yet, these notes are “only” supposed to be souvenirs. If the issuer and the contracting entity act with a little bit more caution and sensitivity regarding the printing process in Oberthur, a European collection area could become even more attractive. Nowadays, museums, castles and special cultural institutions appreciate the concept of the zero euro notes and hope to attract more attention from the general public because of it. The money made from the sale of notes featuring funny or unimportant motifs and editions inspired by fairy tales goes into the wrong pockets – even if their design is beautiful. In this case, each collector has to decide for himself.

In this table, the most important errors that can be found on German zero euro souvenir editions and the values of the corresponding notes are listed. In order to determine the value, the original sales price, the sale via dealers and the (auction) sale via internet auctions have been taken into account.

Although the note comes from Austria, in Mai 2017 – who knows why – the country code letter “X” was printed on it. Though, the code letter “N” is the one to mark editions from Austria. Even though a new edition with the correct letter and a new motif was already issued in November 2017, the note with the “X” remains a popular edition with an error amongst collectors.

Sometimes, it can also happen that an additional letter is printed on a note. That happened in the case of the fourth edition of the Miniatur Wunderland Hamburg. On the first 2,400 notes of the series 2018-4, the motif bears the title “MINIATURE WUNDERLAND HAMBURG”, while the correct indication would be “MINIATUR WUNDERLAND HAMBURG”. The erroneous edition was followed by a corrected one with the same motif and the same serial number.

At this point, we have to distinguish and to determine at first whether there was a problem at the printing plant or whether the issuer himself was responsible for the error. There are even errors in the motifs of the zero euro souvenir notes that were made on purpose!

Unfortunately, in the first three editions of the GDR Museum Berlin, some details of the original motif that was supposed to be depicted were changed. Especially in the case of motifs of the contemporary history, this is alarming. Do we want to consciously pass on erroneous depictions to our descendants? All of this is not helpful!

So, why was the emblem of the GDR depicted by the three editions changed to that point? There has to be a reason. On the three editions (2017-1, 2017-2 and 2018-3), the emblem of the GDR is shown in three different ways – none of them is historically correct! Superficiality never serves the cause of intensive reappraisal. Quite the opposite. With this gallery, I would like to show you the problem.

Such zero euro souvenir editions are no good and useless as documents of contemporary history. They can even cause problems for the issuer. No printing plant can be made responsible for these things, since the mistakes occurred already in the moment of the choice of the motif, whether that mistake was made intentionally or not.

In the second part, we will deal with motifs of the fall of the Berlin wall, motifs of the reunified Germany and of other countries.

January, 14. 2021
The fifth Polish 0 Euro banknote is dedicated to the centenary of the birth of Pope John Paul II and features Karol Wojtyła as a young man. To mark the 5 years anniversary of the 0-Euro project, a special anniversary issue will be printed.