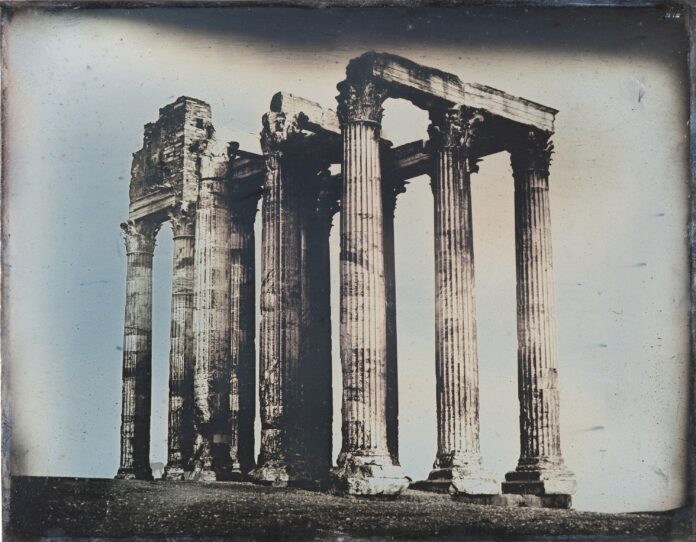 In its exhibition “Monumental Journey: The Daguerreotypes of Girault de Prangey”, The Metropolitan Museum of Art presents masterpieces of early 19th-century photography by one of its unsung pioneers. A trailblazer of the newly invented daguerreotype process, Joseph-Philibert Girault de Prangey (1804–1892) traveled throughout the Eastern Mediterranean from 1842 to 1845, producing more than one thousand daguerreotypes – the largest known extant group from this period and the earliest surviving photographs of Greece, Egypt, Syria, Lebanon, Turkey, and Jerusalem, and among the first depicting Italy.

Featuring approximately 120 of his daguerreotypes, supplemented by examples of his graphic work – watercolors, paintings, and his lithographically illustrated publications – the exhibition is the first in the United States devoted to Girault, and the first to focus on his Mediterranean journey.

“This exhibition reveals not only a seminal oeuvre in the early history of photography, but also a critical moment in both archaeology and in the history of perspectives on the Middle East,” said Max Hollein, Director of The Met. “Girault was the first person to capture photographic documentation of these breathtaking sites – in some instances, these daguerreotypes are the only such recordings in existence – so it is thrilling to present this body of work for the first time.”

Daguerreotypists in the early 1840s faced enormous technical challenges, especially in the desert, so daguerreotypes from these years are exceedingly rare. No other photographer of the period embarked on such a long excursion and successfully made a quantity of plates anywhere near Girault’s production of more than a thousand daguerreotypes. The resulting photographic campaign remains an unparalleled feat in its appearance, scope, scale, and ambition. Using an oversize, custom-made camera, he exposed more than one image on a single plate to create at least six different formats, including unexpected horizontal panoramas and narrow vertical compositions.

“The exhibition reveals Girault as the originator of a thoroughly modern conception of photography, by which visual memories can be stored, retrieved, reassembled, and displayed,” stated Stephen C. Pinson, Curator, Department of Photographs. “At the same time, it is perhaps more important than ever to recognize that Girault was himself the product of a complex network of political, social, and historical forces that had farreaching impact on the West’s relationship with the world he photographed.”

The fact that a collection of this size survived at all is extraordinary and attests to the achievement of an unheralded innovator working with unprecedented technology. The survival of this monumental and exemplary collection is also a result of Girault’s meticulous archival process – precocious at the time, even if today it seems commonplace. The artist stored his daguerreotypes in custom-built wood boxes; in addition, he carefully sorted, labeled, and dated the images so that he could retrieve them for future use, occasionally recording when he utilized them, for example, as the basis for a painting or published print. He also had them inventoried several times during his lifetime. In essence, he created the world’s oldest photographic archive.

The exhibition presents a unique opportunity to experience these rarely seen works, as Girault never exhibited his daguerreotypes and died without direct heirs in 1892. In 1920, a distant relative, Charles de Simony, purchased Girault’s estate outside Langres, France, and discovered the photographs – labeled and carefully stored in their original wood boxes – in a storeroom of his dilapidated villa. A handful of intrepid collectors and curators were henceforth aware of the collection, but its dramatic content and scope remained little-known to the world until 2003, when the first of several auctions of material drawn from the original archive was held.

Monumental Journey: The Daguerreotypes of Girault de Prangey is curated by Stephen C. Pinson, Curator in the Department of Photographs at The Metropolitan Museum of Art.

The exhibition is accompanied by a catalogue published by The Metropolitan Museum of Art.

The MET has also released a short introduction video of the exhibition.

December, 19. 2019
A cultural event of superlatives: Egypt sends 166 objects of Tutankhamun around the globe. The revenues flowing back into the nation on the Nile are enormous. Whether Egypt makes best use of the money is an entirely different matter.
error: