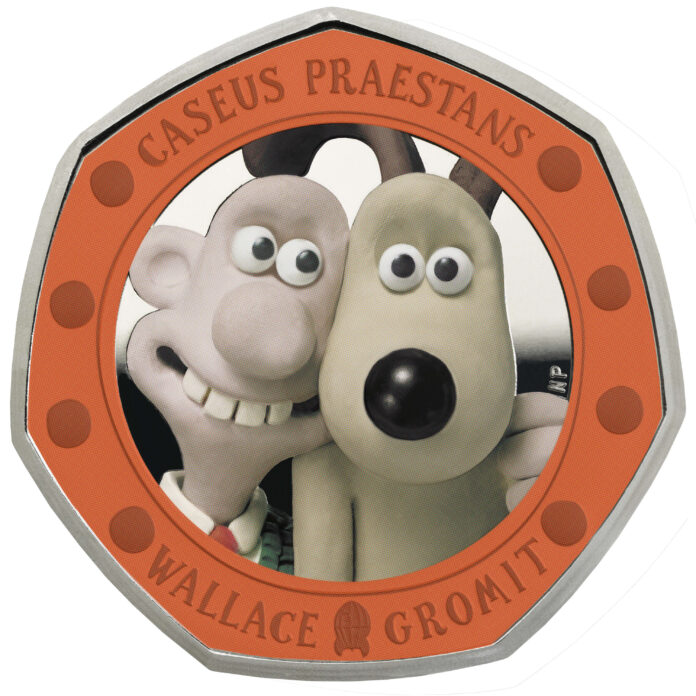 The coin is inspired by the original Wallace & Gromit short film, A Grand Day Out which saw the pair build and launch a rocket ship to the moon, where they tuck in to a picnic of moon cheese and crackers.

Featuring the Latin inscription ‘CASEUS PRAESTANS’, which translates to ‘cracking cheese’, the coin depicts Wallace and Gromit and the outer shell of the rocket ship that took the duo to the moon. The cracking coin was designed by the creator of Wallace & Gromit, Nick Park and the team at Aardman.

Since A Grand Day Out was first screened in 1989, Wallace – a good-natured, eccentric and cheese-loving inventor – along with his companion Gromit – a silent yet loyal and intelligent dog – became one of the nation’s most loved, iconic duos. The pair went on to star in three further half hour specials and are internationally celebrated winning over 100 awards at festivals – including 3 Academy® Awards and 5 BAFTA® Awards.

Nicola Howell, Director of the Consumer Division at The Royal Mint, commented: “Wallace and Gromit are two of Britain’s most loved characters, so we felt it was only right that we marked this momentous anniversary by giving them a place on UK coinage. The films are such a huge part of our popular culture and are loved by generations of all ages, so we’re delighted that we can be a part of the 30th anniversary celebrations.”

Nick Park, Creator of Wallace & Gromit and Director at Aardman, added: “When A Grand Day Out was first screened thirty years ago, we never expected for Wallace & Gromit to become such a long-standing, well-loved series around the world. It’s been an honour to work with The Royal Mint to bring the pair to life in a new way and everyone at Aardman is so excited to see the pair on a coin.”

Available in a range of finishes from the Royal Mint’s website, the coins start at £10 for Brilliant Uncirculated finish coin, whilst the limited edition silver proof coins capture Wallace & Gromit in vivid colour detail. The coin will not be entering general circulation, so this is the only opportunity to get your hands on one of these special coins.

Fans of the duo will be able to strike their own Wallace & Gromit coin at The Royal Mint Experience in Llantrisant, Wales, where there will also be Wallace & Gromit sets on display for a limited time only.

You can find more information about The Royal Mint Experience here.

For more information about the Aardman studio, visit their official website.

In 2013, the Royal Mint exhibited a giant fibre-glass model of Gromit covered in pennies.

16. May 2019
One of the world’s most famous diarists, Samuel Pepys, is honoured by The Royal Mint with a commemorative coin. He contributed decisively to the understanding of the history of the seventeenth century, ranging from the Great Fire of London to the Plague.
error: