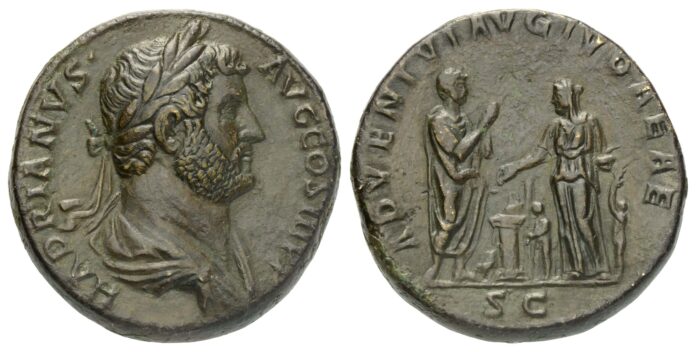 A Premium Selection at Solidus

The current Premium Auction 66 of Solidus presents 150 selected coins from Antiquity to modern times, that distinguish by rarity or exceptional states of preservation. The auction will be held live on the platform AUEX on Tuesday, 27 October 2020, starting at 17:00 CET. Pre-bids can already be submitted.

The auction starts with two nice coins of celtic tribes from Central Gaul, a stater of the Cenomani and a half stater of the Eburovici (lots 1 and 2). Twelve pieces from Magna Graecia are following, among these a golden half stater of Hieron II. (ca. 220 – 217 BC) and a silver stater with an impressive portrait of Zeus from Syracus (214 – 212 BC), furthermore a siculo-punic tetradrachma (ca. 350 – 320 BC) from Entella with an Arethusa-portrait on the averse and a skilfully executed horse depiction on the reverse (lots 12 – 14).

The north of Greece is represented with items from Thrace and Macedonia, e. g. by beautiful tetradrachmas from Ainos (lot 16) and of the Chalcidian League from Olynth (lot 17) as well as a rare quarter stater of Philippos II. from Pella (Lot 18). Tetradrachmas from Athens, two archaic ones and a classical one, all of them splendid specimens, distinguish themselves from the common bulk of this type usually offered (lots 21 – 23). There are several items from the Greek isles. A tetradrachma of Kos with a magnificent portrait of Herakles on the averse and the depiction of a crab on the reverse demonstrates technical and stylistical mastery as well as power of observation (lot 25). Three tetradrachmas of the Ptolemaic kings with double portraits of Serapis and Isis of the late 3rd century BC, having been minted in Soloi, Sidon and Alexandria are of a superb quality (lots 32 – 34). The piece from Soloi has not been published in the standard works yet and is the second specimen known to us.

Two excellently preserved Quadrigati exemplify the coinage of the Roman Republic (Lots 35 and 36). The sale continues with Denarii of the imperial period, e. g. a splendid specimen of Nero (Lot 39). There are two especially beautiful sesterii of Hadrianus, one of these a rare issue commemorating his arrival in the province of Judea (Lots 41 and 42). Six Late Roman and Byzantine gold coins conclude the section with ancient coins. A rare Semissis of Michael I. Rhangabe (811 – 813 AD) together with his son and coruler Theophylactus is worth mentioning (Lot 50).

A small series of rare and appealing Denarii of the German Middle Ages contains a brilliant Denarius from Treves of Bishop Eberhard (Lot 53) and a similar exciting bracteate of Konrad IV. with Elisabeth of Bavaria issued in the royal mint of the city of Ulm (lot 55). One of two „Zwanziger“ from the county of Tirol is a very rare specimen of Leopold III. with the mint mark „P“ (lots 57 – 58). Among several rare coins of the principality of Moldavia are an extremely rare and unusually well preserved silver coin of Jeremia Movila imitating a Polish Trojak (Lot 64) and three nearly perfect shillings of Eustratie Dabija (lots 65 – 67), rarely offered in this condition). The lands of Rus (Early Russia) are represented by an impressve series of diffent types of silver bars and three Dengas of Moscow and Pskov in mint state (lots 68 – 76). Five coppers of the crusaders are of special interest: a rare issue of the county of Edessa (lot 77) and four probably unpublished pieces from the syro-palestinian area (lots 78 – 81).

Modern coins are available from Germany, Austria, France and Italy. There are furthermore several Romanian coins (lots 105 – 130) with many rare patterns (lots 123 – 130). A beautiful taler of the Republic of Ragusa (lot 100) and a very rare and extremely fine Polish taler of Stephan Bathory from Nagybanya (lot 102) are remarkable. Towards the end of the auction follows a group of Russian imperial coinage enclosing some extraordinay items (lots 131 – 148), e. g. an unusual rouble of Elisabeth from 1753 (lot 133). The auction concludes with a mint state ducat of Charles VI. for the kingdom of Hungary of the year 1734 (lot 150).

You can place your maximum bids before the auction – or during the live auction, during which you can bid on the lots in real time and actively influence the auction process, similar to a floor auction. The live auction starts on Tuesday, 27 October 2020, at 17.00 CET.

You can browse through the complete auction catalogue on AUEX and Sixbid.

For further information, go to the website of Solidus Numismatik.

July, 16. 2020
Solidus Summer Auction 62 is online and contains 550 single lots, including many rare and some unusually beautiful items. The auction offers a wide range of attractive coins from Antiquity, the Middle Ages and Modern Times, as well as some interesting medals.
error: