October 24, 2013 – What actually is money? How does it work? And is it for sure that it works only this way and not another? Questions like these you can hear only rarely at numismatic congresses. However, they lead us to the roots of our quest. How can we understand why the first coins came into existence if we do not comprehend the phenomenon money at all? The participants of the workshop ‘Archaeology of Money.’ Photo: Thomas Zachmann, Institute of Classical archaeology Tübingen.

Moreover, numismatics is certainly not the only discipline dealing with money. There are economists, historians of economy and many many more. How many more there are I had not known, though, before I went to the congress organised by Colin Haselgrove (Leicester) and Stefan Krmnicek (Tübingen) in Tübingen on October 17 and 18, 2013. Ethnologists, anthropologists, archaeologists, sinologists – they all reflect on how money works. The congress started on the evening of October 17 with a paper by Bill Maurer, a cultural anthropologist specialised particularly in money and aspects of modern methods of payment. He is a founding member of the Institute of Money, Technology and Financial Inclusions, financed by the Bill and Melinda Gates Foundation. He contributed decisively to the Citi Money Gallery at the British Museum and is now dean of the School of Social Sciences in UC Irving. So he is a real authority on that subject to whose paper ‘Cashlessness, Ancient and Modern’ I really was looking forward. I am sorry, though, that I cannot refer the contents since my English simply was not good enough to get all the details as presented in his dialect. That is a real shame because I am sure I would have learnt much from the paper. Luckily I could understand the other speakers more easily. One of them was Lorenz Rahmstorf who teaches prehistory and medieval archaeology at the University of the Saarland in Saarbrücken. He defined precisely the steps of money evolution: Since the late Palaeolithic Age we have traces of simple appearances of money which, however, permit not yet to distinguish between goods and money. Approximately around 3000/2700 BCE the first raw materials were traded in standardized forms and the first precious metals were weighed then. In Europe, though, this cutting-edge cultural technique spread around only at about 1400/1300 BCE. In a third step coins were introduced which were given a guarantee by an authority – and with that actually we have arrived nearly at our own payment system. Particular emphasis was laid on what we call today premonetary money. Lynn H. Gamble for instance spoke about using shell beads on the North American continent. And Scott Fitzpatrick presented his research at Yap and Palau. The inhabitants of the island Yap used to pay dearly the privilege of being allowed to fetch their famous money stones from the neighbouring island of Palau. The value of these stones was not only determined by their size and beauty but also by the risk the men took during the transport and also by the stories woven around these objects. It was worth particular notion if nobody died during the passage as testified by the name ‘Stone without Tears.’ Eventually this currency was changed by the emigrated Irishman David O’Keefe: Being paid in kopra he brought gigantic stones to Yap with his junk. To these stones, by the way, considerably less value was attributed than to those which had been taken to the island before. 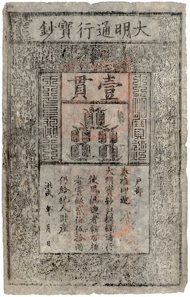 A highlight of the congress came up from where I would not have expected it: from the sinologists. In 2012 Hans Ulrich Vogel (Tübingen) published a much-noticed book where he compared Marco Polo’s remarks about the economy of the Chinese Realm with contemporary Chinese sources. His result in short: ‘Marco Polo was in China.’ Otherwise he could have never disposed of so detailed knowledge regarding money. Indeed paper money did non circulate in the whole empire of Kublai Khan – although we generally think so today – but only in the towns of its north east. In the south west, on the contrary, Marco Polo saw still how cowries were being used. He refers exact charges and describes the prevalent tax system. For those who are interested in this matter we recommend his book. You may order it through the publisher Brill at 176 euros or 245 $. The oddest aspects – at least for numismatics – offered the ethnologist Jos Platenkamp from Münster. He surveys how the indigenous use money in the North Moluccas in Indonesia. Coins have been known for centuries there. Because from the Moluccas clove and nutmeg were imported – for these extremely welcome goods high prices had always been paid.
The ethnologist became aware of the fact that the intrinsic value of the coins had no meaning to the indigenous. Instead their value was quantified according to how they were used: as money alive or money dead. Money alive was paid for goods which would reproduce themselves, goods that yield fruit, that belonged, in short, to the world of those alive. Dead money, on the contrary, belonged to the ancestors, it was given to fine offences, homicide, in short, it was used to adjust violations of the order of the world when the ancestors had to be conciliated again. The value of Dutch guilders was determined by complex calculations which were as difficult to penetrate for the outsider as probably our table of interest and compounded interest for indigenous people.
Anyway, this paper put into perspective everything we were convinced to know about money. Ethnology more than others offers interesting concepts of money which has nothing to do with ours. It offers stimulations for understanding phenomena we could not conceive otherwise. First we must learn, though, how to ask the right questions before beginning to understand.

In this time of specialists when allrounders are commonly regarded as suspicious it has become increasingly more relevant to think out of the box in order to perceive what other disciplines may contribute to one’s own subject. We must give credit to Colin Haselgrove and Stefan Krmnicek of having mounted this uncommon, innovative and highly inspiring workshop. Whatever the single participants will make of this, what interdisciplinary cooperation may come out of it that will be shown by the future.

One thing, however, is sure: research in money is still intriguing!

Here you can find all details of the workshop.

This is the website of the institute of Classical archaeology in Tübingen.

By the way, Tübingen has got a museum of ancient cultures with a coin collection worth seeing.

And here is the website of the School of Archaeology and Ancient History of the University of Leicester.