The second coin in the Austrian Mint’s new series “Rome on the Danube” is dedicated to the famous city of Vienna that began its existence as a military outpost on the northern borders of the Roman Empire. The 20 Euro silver commemorative “Vindobona” will be issued on 8th September, 2010, and is eagerly awaited by coin collectors and fans of Roman history alike.
Mint Austrian Mint.

The new silver 20 Euro coin shows Marcus Aurelius on horseback in the legionary fortress of Vindobona. An officer of his imperial guard stands beside him, while another hands the emperor a scroll bearing an important message. In the background one of the double gates of the fort with its twin defensive towers can be seen; perhaps the porta decumana that opened up on the defensive ditch to the south, today’s Graben. The scene is based on an ancient marble relief depicting the Marcomanni Wars. The ragged edge at the top symbolises the border along the River Danube.
The reverse side shows a centurion proudly inspecting the soldiers of his centuria (nominally 100, but in reality 60-80 men) drawn up on the via principalis, the main road of the fortress crossing from east to west. In the background is the porta principalis dextra (the principal righthand gate). The centurion wears a transverse crest on his helmet, a sign of his rank. Over his scale armour (lorica squamata) he wears phalerae, a set of ornate silver disks or medallions on leather bands that served as signs of distinction and reward. He wears metal greaves on his legs and a cloak fixed to his shoulder so as to allow free movement of his arms. Unseen in this depiction, he would wear the Roman short sword (gladius) on his left side and he is probably holding the customary vitis (vine staff or swagger stick) behind his back. The legionaries stand with their rectangular body shields holding the Roman spear or pilum. The centurion was not only their officer, but was also responsible for their training and equipment. Behind him stands the signifer or standard-bearer. Over his helmet and shoulders he wears the skin of an animal of prey, usually a wolf, but also that of a bear or lion, depending on the region. 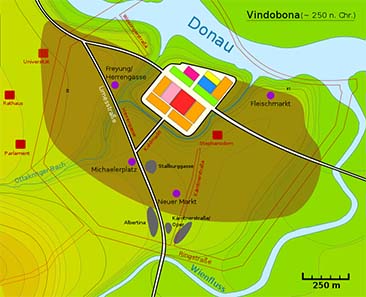 The Roman fortress. From: Wikipedia.

The historical background
Like so many Roman towns and fortresses VINDOBONA, Roman Vienna, was preceded by Celtic settlements. It was an area where two important trade routes crossed, the Amber Road from the north down to Italy and the River Danube itself. Roman presence began with a contingent of Celtic cavalry from Britain; an outpost of Carnuntum, the Roman capital of the province Pannonia Superior, just slightly down stream to the east. It was the Emperor Trajan (98-117 A.D.) who, in the course of strengthening the Limes or border defences along the Danube, ordered the construction of a fortress at Vindobona capable of accommodating a legion of up to 6,000 men.
Begun by the XIII Legion and completed by the XIV Legion, it became the headquarters in 114 of Legion X Gemina who remained stationed there for over three centuries.
Built on a plateau overlooking the Danube, the fortress took advantage of natural escarpments to increase the height of its walls. The exclusive shopping street of modern Vienna, the Graben (German for “ditch”), still marks the defensive moat outside its southern walls. A civilian town of traders and artisans soon sprang up in the protective shadow of the legionary fort. Little is known of this settlement, as the modern city inhibits any extensive excavations. 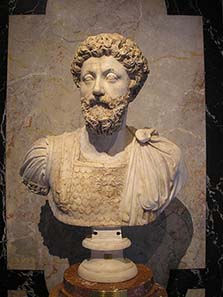 According to tradition the great emperor and philosopher, Marcus Aurelius, died in Vindobona in the year 180. A street in the inner city (within the area of the Roman fort) bears his name. Marcus Aurelius personally led the military campaigns against the Marcomanni and the Quadi tribes on the Danube, who had been making destructive raids in the provinces of Noricum and Pannonia down even into northern Italy. Vindobona itself had been burnt, but whether by marauding raiders or by the retreating Romans themselves is unclear. The emperor spent some three years in Carnuntum, where he wrote part of his philosophical work “Meditations”, but he seems to have fallen ill in Vindobona (possibly from plague) and died there on 17th March, 180. Another emperor, Septimius Serverus, who had been raised to the purple by the legions in Carnuntum, probably gave Vindobona the status of a Roman city (municipium) during a tour of the Danube Limes in 202.
Life on the border was always uncertain with danger just across the river. Of course, Roman ships patrolled the river and Roman soldiers made expeditions on the other side to keep hostile tribes away from the imperial borders. However, any reduction in military strength or internal turmoil caused by civil wars and rival emperors, afforded the tribes the opportunity to raid across the border. Pressure built up on Rome’s borders in the fourth century as barbarian tribes moved westward, often fleeing before other barbarians like the Huns.
From 400 to 405 bands of Vandals and Goths ravished the countryside. Vindobona was burnt and destroyed. Roman troops had had to abandon the Danube border and withdraw back into Italy. In 410 the Eternal City itself fell to Alaric and his army of Visigoths. In 433 the Romans ceded the land around Vindobona to the Huns. Within the ruined walls of the legionary fortress mediaeval Vienna would be born.

Second coin of the series
The 20 Euro coin “Vindobona” belongs to the series “Rome on the Danube”. Following the first coin “Virunum”, capital of the province of Noricum, “Vindobona” will itself be followed in 2011 by “Carnuntum”, capital of the province Pannonia Superior, and “Aguntum”, a city of purely civilian character just south of the Alps. 2012 will conclude the series with coins for “Lauriacum” and the Limes as well as for “Brigantium” on the shores of Lake Constance near Switzerland.

If you want to know more about the Austrian mint, please click here.

If you would like to make a short, but extremely impressing voyage through Roman Vienna, click here and here.