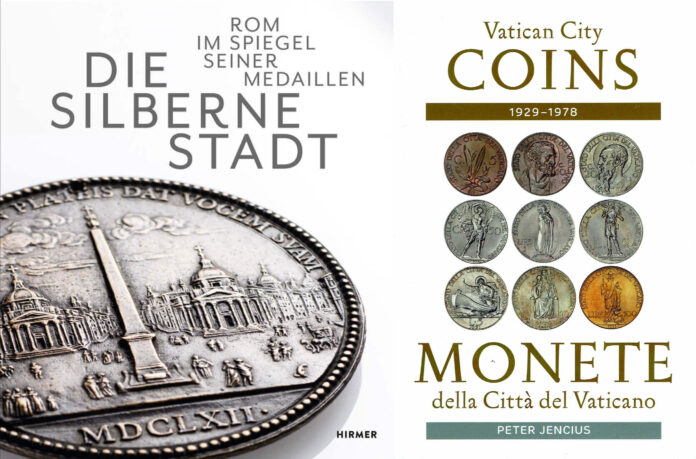 Actually, the two books we show you today could not be more different in terms of their appearance. But they have one thing in common: they both deal with the Vatican and its numismatic testimonies. While a magnificent illustrated book, which has been published by the State Coin Collection of Munich in cooperation with the Hirmer publishing house, is dedicated to papal medals of the Renaissance and the Baroque periods, the American coin dealer Peter Jencius wrote a catalogue of Vatican circulation coins issued between 1929 and 1978.

However, there is something else these books have in common: they focus on collectors.

A Book That Should Be Bought and Read

All the millions of tourists that still travel to Rome today – regardless of their religion – to see the world-famous sights of the city are the successors of the young nobles who travelled to Italy since the Renaissance period to complete their education. In Italy, they learned about the role that coins and medals had to play for an educated man. And once they were back home, they carried on what they had seen in Rome – as much as their financial means allowed them to. Back then, every educated man had a collection of coins and medals. And he discussed numismatic matters in a knowledgeable way, at least if he wanted to make a lasting impression. One can learn from the wonderful illustrated book edited by Matteo Burioni and Martin Hirsch about the social function of medals.

The work describes this phenomenon using papal medals as an example – and covers the time frame from the beginnings of the Reformation in Germany to the triumph of the Enlightenment. While doing so, the work is a feast for the eyes and for the mind. “Die silberne Stadt” (The Silver City) is a refreshing alternative to all the similar books on papal medals that we already have in our bookshelves. No, the work does not discuss and describe all buildings of Rome like the others do. No, it does not contain the biographies of the popes that we already know. Instead, there is a wealth of interesting details and background information, painting the big picture. Yes, there is a catalogue and the pieces are described perfectly, but that is not why I recommend this book to any coin collector.

A magnificent volume!
1 of 3

Instead of focusing on a single object at a time, the authors – renowned numismatists and cultural historians from several countries – trace the messages and paths of these medals. The work is all about the basics: Why were these pieces created and why was there such a demand for them? How did one get these medals? How did people identify and store them?

This work really excites me. The authors succeeded in an almost playful way to give us collectors back a part of our past. And that is why this book is not just a classic coffee table book, but a work that a coin collector must have read. It should make coin collectors proud to continue a tradition that is an important cultural heritage, which was once one of the foundations of a culturally united Europe.

Collecting is an intangible cultural asset!

A Manual for Collectors

What does a collector need to build a collection? Exactly! A catalogue that tells him which types there are and how rare they are. This is what Peter Jencius’ catalogue does in English and Italian. Every coin type is precisely catalogued, described and he gives the mintage number as well as an appraisal. In addition, the introduction mentions the necessary pieces of international law, on the basis of which the Vatican still has the right to mint coins.

The impressive thing about this catalogue is its clear structure and the pragmatism with which the author prepared a field of collection whose coins can be bought for rather small amounts, with a few exceptions.

As I said, the books could not be more different. But one thing is true for both. They can attract new collectors. Anyone who looks at the illustrated book “Die silberne Stadt” probably cannot help but consider joining this long-standing tradition of collecting papal medals. And Peter Jencius provides collectors with a wonderful tool for a field of collection that is still very affordable.

You can purchase “Die silberne Stadt” for 59 euros from the Hirmer publishing house.

You can purchase “Vatican City Coins” from Peter Jencius.

The Year of the Dealer

July, 25. 2019
‘SOLD! The Year of the Dealer: Antique Dealers, Art Markets and Museum’ is a collaborative research project by major British museums organized by the University of Leeds. It investigates the history of the antique, coin and art trade and its relationship with public museums.
error: