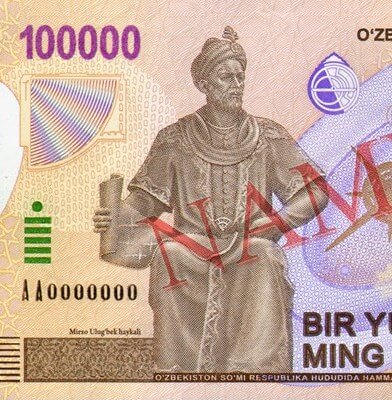 The Central Bank of Uzbekistan have released new 100,000 Som banknotes into circulation on February 25th, 2019, equal in exchange to $US 11.90. With this issue, the new note is now the largest denomination to be utilised in the Uzbek economy.

The banknote measures 144 x 78 mm. and is printed on a paper-based substrate with a predominant light brown colour with additional blue accents and a corresponding multi-colour underprint. The notes’ serial numbers consist of a two-letter Latin alphabet characters followed by a seven-digit number and are positioned on the lower left and right halves as seen from the front.

The obverse or front side includes an image of the Uzbek monument to Mirzo Ulugbek, which is located at the Observatory of Ulugh Beg, Samarkand, Uzbekistan and shown on the left side of the note. The planets of the solar system and six smaller planets are depicted around in orbit along with stars of various sizes which have a colour-variable property when viewed from a certain angle.

The reverse or back side features a detailed image of the Mirzo Ulugbek Observatory printed in a dark brown colour. The text “O’ZBEKISTON RESPUBLIKASI MARKAZIY BANKI” is printed above in two lines with the year “2019” shown in an ornamental guilloche positioned to the left of the Observatory. The underprint of the banknote is centred and shows the outline of the map of the Republic of Uzbekistan. A place indicator is shown where the city of Samarkand is located, where the great scientist Mirzo Ulugbek conducted scientific activities. In the upper right corner of the banknote is the Coat of Arms of the Republic of Uzbekistan printed with a darker brown colour.

Watermark: On the right edge of the banknote is a white oval field that includes a watermark of the portrait of Mirzo Ulugbek and a filigree watermark in the form of the figure 100,000.

Colour Variable ink: In the upper left corner of the banknote there is the numeral 100 000 which, depending on the viewing angle, the colour of the numeral varies from magenta to brown.

Latent image: In the lower part of the left side of the banknote against the background of the ornamental pattern, the initials “UZB” become visible at a certain angle to a surface light source.

Tactile Print: A series of bars and a single dot shown in green metallic print is located towards the left edge of the banknote and is intended for the note’s identification by visually impaired persons.

Aligned print registry: In the upper part of the banknote, on the right side of the monument, is an image of the multifunctional astronomical instrument “Astraliab”, when viewed through the light, the image is complemented by an additionally coloured background from the reverse or back of the banknote.

Colour-shifting ink: In the middle part of the banknote is a diagram of the solar system. Depending on the viewing angle, the colour of the image changes from golden to green.

Mirza Muhammad Taraghay bin Shahrukh, (1394 – 1449) better known as Ulugh Beg, was the ruler of the Timurid Empire from 1447 until his death in 1449. The Timurid Empire was a Persianate Turko-Mongol region once comprising parts of modern-day Uzbekistan, Iran, the Caucasus, Mesopotamia, Afghanistan, much of Central Asia as well as parts of contemporary India, Pakistan, Syria and Turkey.

He is best remembered in Central Asia for having built the great Ulugh Beg Observatory in Samarkand between 1424 and 1429. It was considered by scholars to have been one of the finest observatories in the Islamic world at the time and the largest in Central Asia.

The past and present of Uzbek currency

The Central Bank of Uzbekistan was established shortly after the independence of the Republic of Uzbekistan was formalised in 1991. The newly created Central Bank began to issue the Som, now the national currency in place of the former Soviet Ruble in 1993 at a par-rate value. In 1994, a revised Som was re-valued at a rate of 1000 to one with new banknotes and for the first time circulation coins being issued.

For additional information on the currently circulating banknotes and coins within the Republic of Uzbekistan, please visit the website of the Central Bank.

Those who are interested in the medieval and ancient coinage from Bukhara, Termes und Chaganian should take a look at the Sylloge Nummorum Sasanidarum volume on Uzbekistan.

The Encyclopaedia Britannica tells you more about the Timurid ruler Ulugh Beg.

You can also learn more about Ulugh Beg and his observatory in this interesting video.

January, 7. 2021
A serious diplomatic dispute came up in the context of the G20 Summit. However, the problem wasn’t due to any controversial comments made but by a banknote issued on 25 October 2020 by The Saudi Arabian Monetary Agency as Michael Alexander reports.
error: