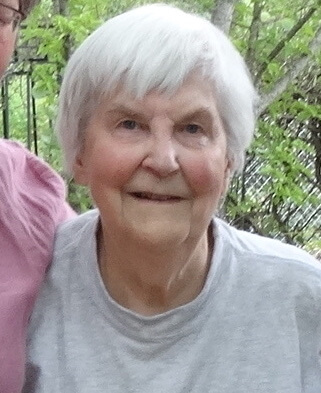 I admired Ulla Westermark even before I met her personally in 1995. Not because of her great knowledge of Greek numismatics, but because two professors at once had asked me to give her flowers in their name. Both professors were known around the globe – but certainly not for promoting female numismatists. What kind of woman was this who, despite her outstanding knowledge, had earned the loving admiration of these two – let’s call things as they are – machos?

Ulla Westermark was definitely a special person: calm, quiet and with great inner strength and confidence. And she was open-minded towards other people and towards the things she might learn from them. She surprised me, an absolute beginner, by attending and paying attention to the three-day seminar that I had the honour to give in Uppsala at that time. It was incredible: back then, Ulla Westermark had already retired as director of the Stockholm Coin Cabinet more than a decade ago. She was coordinating the work on the volumes of the Sylloge Nummorum Graecorum all over the world, and yet, she didn’t have a problem with sacrificing a few days to travel from Stockholm to Uppsala in order to listen to what a young woman who had just finished her doctorate had to say! But that’s just how Ulla Westermark was.

Ulla Westermark was born on 30 March 1927. She always liked to point out that she had been lucky that it was Willy Schwabacher himself who sparked her passion for numismatics. As a Jew, he had found shelter during the Second World War in neutral Sweden, where he worked from 1954 to 1963 at the Royal Coin Cabinet. Additionally, he had been a teacher at the University of Stockholm since 1952. That’s where he met the young student Ulla, who was studying art history, classical archaeology and literary history but could easily be excited for numismatics. In 1961 she obtained her doctorate with the German dissertation “Das Bildnis des Philetairos von Pergamon. Corpus der Münzprägung”. And to this day, her work is considered a standard reference in the field of Pergamene coinage.

Afterwards, she worked for many years as curator for Greek coins at the Royal Coin Cabinet of Stockholm, which she headed as director from 1979 to 1983 at the end of her career. Some of her most important works were written during this time. A good example is her monograph “The Coinage of Kamaria” written in collaboration with Gilbert Kenneth Jenkins and published in 1980 in the renowned Special Publications of the Royal Numismatic Society.

However, it would be a mistake to assume that Ulla Westermark’s retirement was a calm time free of numismatics. From 1986 to 1996, she coordinated the publication of the important Sylloge Nummorum Graecorum and worked in the premises of the Swedish Numismatic Society in the Banérgatan on her corpus study of the coins of Akragas.

She lived to see the corpus being published in 2018 even though Ulla Westermark’s manuscript did not meet the technical requirements of today’s publishing houses. Two friends from Uppsala helped her, Harald Nilsson and Hendrik Mäkeler – and that’s typical of Ulla: she earned the affection and love of anyone she worked with. And everybody felt the need to give something back.

In 2002, Harald Nilsson published a Festschrift on the occasion of Ulla’s 75th birthday. And it is revealing to see all the people who contributed to this publication. The table of contents including 47 authors appears to be an international who’s who of Greek numismatics. Everybody who worked in this field knew and liked(!) Ulla Westermark.

Her work also received the official recognition it deserved: in 1995, the Gesellschaft für Internationale Geldgeschichte (Association for International History of Money) awarded her its prize medal and in 1997 the ANS honoured her with the Archer M. Huntingdon medal. She was made honorary member of the International Numismatic Commission and the Royal Numismatic Society. Furthermore, she was awarded an honorary doctorate by the University of Stockholm in 1988.

And yet, if you try to find a biography of this numismatist on the internet, you won’t succeed. Whereas there are extensive Wikipedia articles in several languages about men like Willy Schwabacher and Kenneth Jenkins, Ulla Westermark is only quoted in the comments as an author of many, many books.

Perhaps it is because she was a female numismatist in a time when men dominated the field. Her slightly older contemporary Elvira Clain-Stefanelli, who enlarged the collection of the Smithsonian Museum between 1956 and 1982 from 60,000 to 960,000 items, can be found on Wikipedia, however, her colourful and adventurous life is dealt with in a two-line entry.

That’s why Ulla Westermark is much more to me than an important scholar who enriched our knowledge of Greek numismatics. To me, she is a role model, one of the great pioneers that proved to the world of men that women are capable of the same achievements. She did it without making a fuss about it, perhaps because she never had to prove anything to herself.

Ulla, we will miss you. You were such a good listener. And in the scholarly world there are way too few people that are not only able to speak up but are capable of listening, too.

March, 10. 2022
David Ryder will advise Asset Marketing Services on an exclusive basis. The former Director of the US Mint assists one of the largest direct-to-consumer retailers of collectible coins in their marketing strategies.
error: