Unheard-of: The Treasure Game Coin serves as game board for an exciting treasure hunt.

The game’s theme matches that of its issuing country, the Island of Palau: Two players try to steal the pirate treasure from the evil captain. To get to the precious treasure chest, they have to cross the deep ocean. And there is more than one danger lurking in the depth of the sea: If a player comes across a shark, for instance, he has to move back three pitches. If he gets lucky and meets the swift kraken, he moves forward three pitches. The player who overcomes all obstacles and reaches the treasure chest first wins.

There is no age limit to this adventure-filled game. Children and adults alike are invited to go treasure hunting and discover how much fun numismatics can be.

The Coin comes in a velvet bag, as do the accessories: Two tokens (red and yellow), a special die, and instructions. 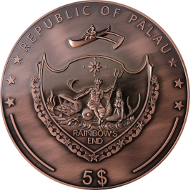 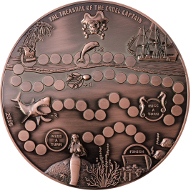 The reverse is designed as a game board. Starting at the sailing ship, the path criss-crosses the coin in 50 steps (some of them specifically marked). The goal is the treasure chest on the lower right coin edge. The inscription along the upper edge reads THE TREASURE OF THE CRUEL CAPTAIN, on the left edge, the year of issue is marked, 2015.

Articles on real or fictional treasures you may find in our CoinsWeekly archive.