May 4, 2017 – Spain is “it” these days. Say the tourism experts. It’s one of the few countries left if you want to combine sun, beach, and cheap wine with a carefree holiday. That’s why people are headed to Spain en masse. So were we, albeit not on a plane and not towards the beach, but with our own car and towards the country’s most monumental sights, mainly from the Roman epoch but also from the Middle Ages. Travel with us on this year’s route. Our first stop, however, was not yet in Spain but in the South of France…

… in the beautiful city of  Nîmes.

Five o’clock in the morning: the alarm goes off. We wanted to get an early start so as to find the highway empty when driving across Switzerland, via Geneva, to France. That way we’re killing two birds with one stone: by reducing the hefty road charge and avoiding the monster that goes by the name of Lyon by a long shot. A good plan. What we had not thought of, however, was that today was the last day of the Geneva Motor Show. So Switzerland’s streets were not quite as empty as was to be expected on a holy Sunday… 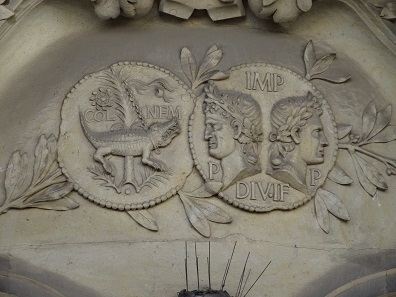 Nîmes is proud of its history: Especially the famous as of Augustus is omnipresent. Here on the face of the Musée des Beaux-Arts. Photo: KW.

We still made it to Nîmes in record time. It is shortly after 1:00 pm when we reach our first destination. I had booked a room, on the outskirts of the city, in a beautiful little hotel with the equally beautiful name l’Orangerie, which is built around a courtyard with garden and pool. Our room has a huge balcony and air conditioning, after all it’s almost 20°C. And the small rooms really heat up to an uncomfortable level in the sun.
We are tired and because we’re on holiday we have a siesta first. What wakes us is the sweat streaming down our bodies, caused by the oppressive heat. What’s with the A/C? Well, the A/C is doing exactly what it’s supposed to … and heats – usually that’s what a “climatisation” in Nîmes in March needs to be doing. The lady at the reception desk told us, very friendly, to open the window if we wanted it cool. Changing the “climatisation” from hot to cold was beyond her powers. 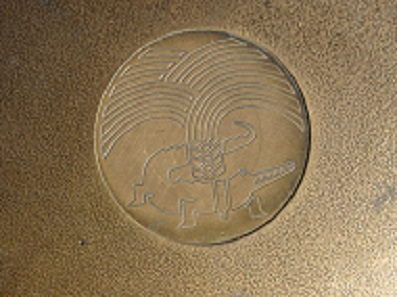 Of course we did not dare fling the windows wide open, at least not as long as we were out of the room. There is a reason why every parking lot in Southern France has warning signs which caution not to leave any valuables in your car. Even on our closed off (!) parking lot there is a big sign telling us that unfortunately the hotel cannot be held liable for the potential loss of valuable objects. And at the petrol station, urgently needed by our car after some 600 km, no petrol will come out of the pump no matter what trick I try. I have to personally present myself to the petrol station attendant, who benevolently decides that I may fill up without advance payment. Unfortunately, the friendly attendant said, there were just too many people who took off without paying. The police did little or nothing against that. Hence they had switched to advance payments. But we looked so trustworthy… 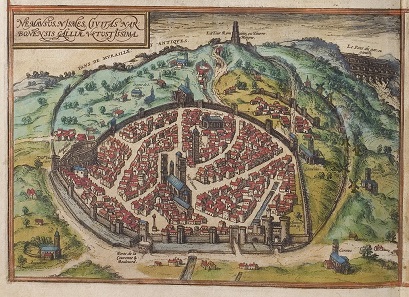 Nîmes owes its rise to the founding of a colony in 27 BC by Augustus. He is said to have settled the area with soldiers who had served in Egypt. It is from them that the city derives the animal on its coat of arms, the crocodile. Fastened to a palm it can still be seen everywhere around the city today. As it were, the famous as of Neumasus became the model for the modern coat of arms of Nîmes. And not just that: you run into crocodiles everywhere you go. 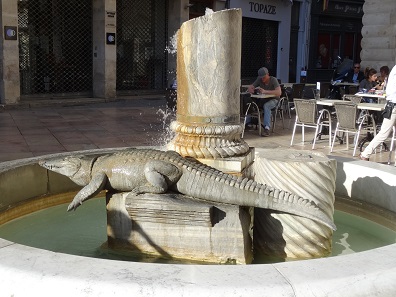 This crocodile was my personal favourite. Photo: KW.

My favourite crocodile crawls across a water fountain, located in the immediate neighbourhood of bustling bars. 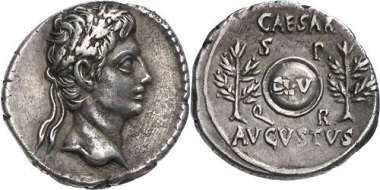 Nîmes soon increased in importance. After all it was located on the Via Domitia, on which the legions could be moved from Italy to Spain. Although that was much more time-consuming than the sea route, it was also cheaper. If aurei and denarii were minted in Nîmes is contested. The catalogue of the Bibliothèque nationale places several coins in this city, especially because a coin die for the obverse, which belongs to this emission, was found here. In London one is not convinced of this fact so that the RIC places the pieces at some undetermined Spanish mint. Who is right? That’s a matter of personal preference. But enough of Roman numismatics. We don’t want to bore you, do we!

Nîmes must have been very important. At least judging by the size of its amphitheatre. It belongs to the largest ones in the whole Roman Empire. But the city became less important after the Migration Period.
After the conquest by the Visigoths in 472 Nîmes fell to the Spanish Umayyads in 725 before Pepin the Short took it back in 752. The citizens did not seem too happy about that. So there was an uprising in 754. The Roman buildings which were still intact after that were used to house the administration. At the time of Saint Louis the reeve moved into the amphitheatre. The bishop had added stories to the Temple of Augustus, and the four consuls lived in the Maison Carrée. 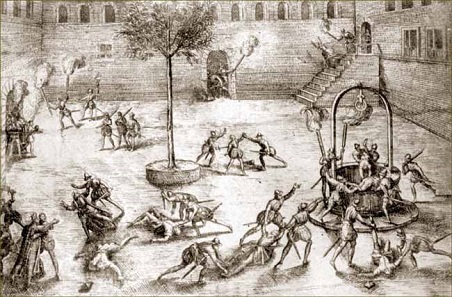 The Michelade of 1567 in Nîmes. Source: Wikipedia, no further specifications there.

Francis I established a university in Nîmes, as a consequence of which Calvinism spread particularly fast. So Nîmes remained thoroughly Huguenot during the French Wars of Religion. Testimony to that is the local predecessor of the St. Bartholomy’s Day massacre in Paris. It was called Michelade and took place in 1567. The Edict of Nantes calmed the citizens down; its revocation led to the uprising of the Camisards. This forced Louis XIV, in the midst of the War of the Spanish Succession, to lead the so-called War of the Cévennes. A large part of the French national debt, left behind by the Sun King, was caused by this war. 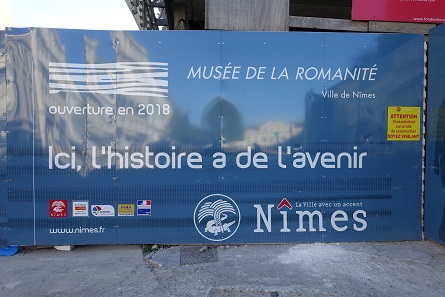 From our hotel we walk into the old town. We soon notice that Nîmes is all spruced up. One would like to be World Heritage so much. There is the promise of a new archaeological museum. Even on a Sunday cleaning workers walk the streets and declare war on the weed with flame throwers. There is even a World Heritage office.
Do you want my honest opinion? I wish for the city that it doesn’t get the title. If it did, tourist crowds would explode and take over the old town. And that would be a shame because the inhabitants of Nîmes very well know how to use it…
On this glorious Sunday, anyway, there are no tourists but us. Instead, lots of families, old and young couples, groups of girls and boys, most of them strictly gender-separated but actively ignoring each other. People are loud; people are happy; everybody is enjoying the beautiful day and the brilliant sunshine. 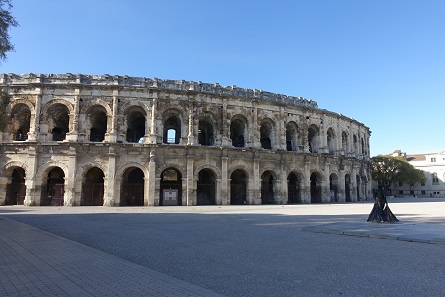 We walk past the amphitheatre. Supposedly it could originally hold 25,000 spectators. Today it is used for bull fights and Roman spectacles. It is the location of the Nîmes music festival and can boast of having accommodated a number of contemporary stars who have made live records here, among them, for instance, Dire Straits and the German band Rammstein. (Unbelievable what kind of details Wikipedia the Inevitable can spit out!) 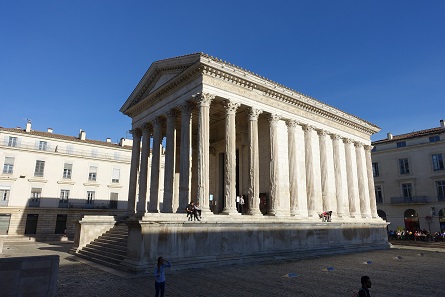 We are comfortably seated in a café behind the Maison Carrée and drinking, to the great astonishment of our garcon, a citron pressé (who but German tourists still drinks that nowadays?). No, we are not thinking about the fact that this temple was built for Gaius and Lucius, Augustus’ adoptive sons who died young. Only as late as 1823 was the temple rid of its architectural add-ons and turned into a museum. On this occasion it got its imposing vestibule, called pronaos by archaeologists. So that’s not authentic, and neither is the interior. Today it houses a cinema, which runs an apparently very “popular” show about Roman life. Visitors on “Tripadvisor” at least call it “spectacular” and praise “Celts/ Romans and gladiators”. Whatever that means. 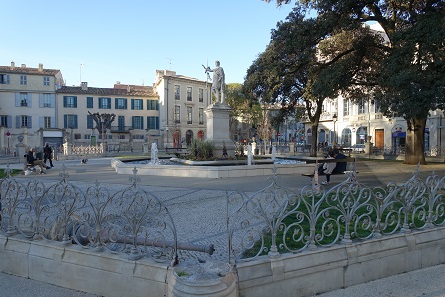 Next we visit the statue of Antoninus Pius. He was born in Italy but his family was from Nîmes. 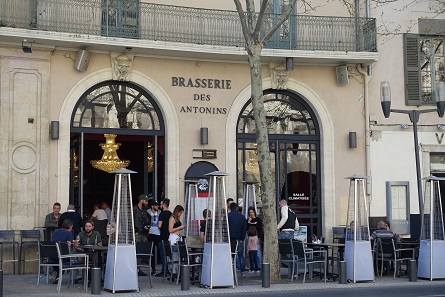 Reason enough to name a restaurant or two after them. 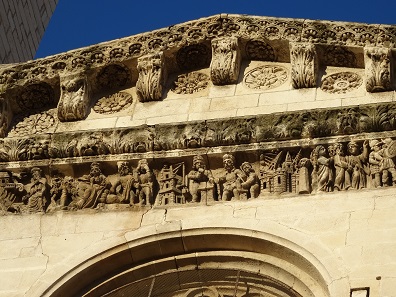 We discovered the cathedral, which is much more beautiful than I remember it; especially the Romanesque friezes are impressive! Clearly recognizable in the picture are the sons of Noah, uncovering their drunk father. To the right, Lot’s wife becoming a pillar of salt (I’d always asked myself how I should imagine a pillar of salt, now I know). Pope Urban II had consecrated the construction on his propaganda campaign for the First Crusade in 1196. What it looks like on the interior? No idea. It’s late and the cathedral is closed. So we return to our hotel, tired from a long day.

It’s still too early for dinner. Most restaurants in France open only at 7.00 pm, just to close again at 9.00 pm, in accordance with union regulations. And don’t anybody dare be hungry outside of these union-prescribed mealtimes! We hope for the restaurant in our hotel, which unfortunately is non-existent, at least in March, outside the season. But virtue was made out of necessity, and we were offered a number of menus as part of the room service. What a glorious idea! 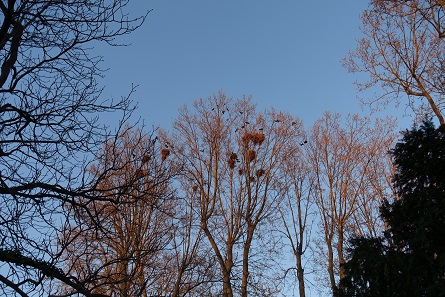 We sit on the balcony at dusk, watching the ravens which are getting comfortable for the night in the neighbouring trees, applaud the risky flight manoeuvres of the many bats, and realize that we are incredibly lucky to experience something that beautiful.

The next stop on our journey brings us to Tarragona, the Roman Tarraco. We are speaking of nothing less than one of the most important centres of the Iberian Peninsula in Roman times and the former capital of Hispania Tarraconensis.

Of course we will make all episodes of the numismatic travelogue “To Spain!” available here.