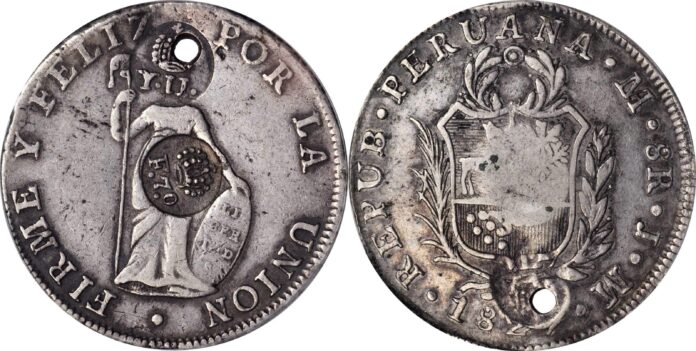 Demonstrating the continuing success of their Collectors Choice Online (CCO) auctions, Stack’s Bowers Galleries is excited to announce that their October 2020 online offering of ancient and world coins, medals and paper money brought just over $1.22 million. The sale of 2,543 lots surpassed the presale estimate and featured an impressive sell through rate of 93.2%. This marks the first time that the firm has exceeded the $1 million threshold for their online-only auction program, and demonstrates the intense following the auction house has established for its wide-ranging numismatic material. Record highs are being set for both consignment and participation in these online auctions, and an increase in the number of these sales is likely to follow to meet the demand. (All prices include the buyer’s premium.)

The leading price was garnered by an interesting and rare doubly countermarked 8 Reales from the Philippines, that featured the authorities of both Ferdinand VII and Isabella II and brought $43,200. An argent and lustrous Chinese Dollar from Kiangnan sold for $32,400.

A particularly notable result from the currency portion of the sale was a 1918 Filipino 500 Pesos Treasury Certificate that realized $12,000.

The Stack’s Bowers Galleries world coin and currency team is now busy preparing their always highly anticipated January sale – an officially sanctioned auction of the 2021 NYINC – with their next CCO following quickly in February. If you would like to take advantage of this great market climate and consign either single items or collections and inventories, please call 800-458-4646 or email. A consignment director will be happy assist you in achieving the best possible return on your material.

All realised prices of the auctions can be found on sixbid.

December, 23. 2021
The Hong Kong sale of Stack’s Bowers Galleries in December 2021 realized more than $10 million in total sales. Leading the way was a Chinese Silver Tael Pattern Restrike that sold for $1.35 million.
error: