March 30, 2017 – “The Rise of the Art Medal – the Belle Epoque and Beyond” is an exhibition at The New Approach Contemporary Medallic Art Research Center, New York running until July 2017. In exhibition are selected works from the collections of Alexander, Miller, Rezak, Scarinci, Simpson, and Withington, mainly European and dating between 1878 and 1920. In the following, curator Scott Miller, exposes some thoughts on medals and the development they have made since the 18th century.

What exactly is a “medal?” Even collectors and sculptors often ask this question.
And yet, the discussion is not new. The definition of the medal has been debated several times in the past. In recent years, many works shown at the International Art Medal Federation (FIDEM) and other venues have little relation to what we think is the classic medal. Increasingly, the lines between the medal, small sculpture and paperweights seem blurred.

Even the term “medal” itself has some historic ambiguity. Until the late 19th century, the word would just as often be used to describe an out-of-date coin as it would what we would term a “commemorative medal.” Nevertheless, until about 135 years ago, virtually all medals, as we know them, were generally round and commemorative in nature. The earliest medals, dating to the renaissance, honored specific individuals. Over time, medals commemorated contemporary and historical events, and later were commonly given as prizes and awards. For 400 years, the artists and engravers who created medals often worked in most current and fashionable styles of decorative art. However, the medal rarely strayed from its commemorative role.

During the second half of the 19th century, several innovations in technology changed how medals could be produced and, consequently, forever changed who could produce a struck medal. While many artists could produce a cast medal, by the 18th century, the overwhelming majority of medals were struck. This required the services of an engraver, essentially a craftsman capable of engraving a design directly into the steel die. Although a number of these individuals were capable of producing work with artistic merit, few could actually be considered artists. However, with the introduction of the electrotype process in 1838 and the development of the reducing machine, it became possible for almost any artist to produce a model that could later be reduced and transferred by technicians into a workable die. Thanks to these technologies, the craft of creating a medal was no longer limited to engravers, and a much broader range of artists were now able to produce medals of aesthetic merit. Once the production of medals was no longer limited to die engravers, it was inevitable that the approach to creating medals would change. Sculptors and other artists began to try their hand at producing medals, and in the process new influences crept into medal design. 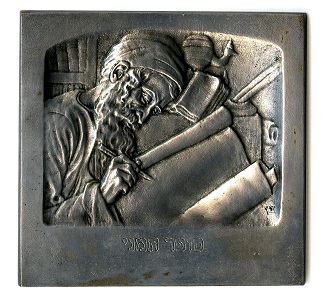 In addition to the technological advances that affected the production of medals, the late 19th century saw a rise in universal education and standards of living. Cultural activities, such as the founding and popularization of societies, museums, exhibitions and publications devoted to the arts and sciences increased. A rising middle class now had the leisure time to participate in intellectual activities, engage in artistic pursuits, and improve themselves through involvement in more refined cultural activities. Collecting became popular with the middle class, and as the number of collectors increased, so did the number of clubs and publications.

In 1899, the first organization devoted to the art medal was organized in France, the “Société des Amis de la Médaille Française”. It was soon joined by groups in other countries, including the Dutch-Belgian “Société Hollandaise-Belge des Amis de la Médaille d’Art” and the “Österreichische Gesellschaft zur Förderung der Medaillenkunst und Kleinplastik” in Vienna. A number of books and articles on contemporary medals, especially those by Roger Marx, H. Dompierre de Chaufepié and F. Mazzerolle, helped promote the medal. Mainline art publications such as “The Studio and Art & Décoration” began to include medallic news.

Although the new approach to medallic work in 19th century France is generally attributed to Hubert Ponscarme and his 1867 medal of Joseph Naudet, the first non-commemorative medal is not as easily identified. A glance through the catalogue of the 1910 International Exhibition of Contemporary Medals reveals few non-commemorative medals prior to the late 1890s. Among the earliest were Victor Peter’s 1877 “Idylle”, Anton Scharff’s 1878 “Viennese Laundry Maid” and Alexandre Charpentier’s 1883 “La Mère Allaitant”. Yet within a few years the nature of the medal was completely transformed. Though commemorative medals continued to be produced, the art medal, a purely aesthetic work, was here to stay.

The increased interest in medallic art was not confined to continental Europe. Alphonse Legros and the Slade Girls helped promote the new art medal in Britain. Younger sculptors, such as W. Goscombe John, Theodore Spicer Simson and Carter Preston created medals featuring the new aesthetic. In the United States, Augustus St. Gaudens and his many pupils inaugurated a new appreciation for the art medal. 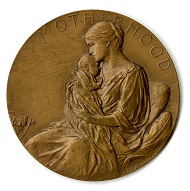 However, despite the dramatic growth of interest in the art medal, commemorative and prize medals remained the norm. In both the US and Britian, art medals continued to be rare. Of the 12 medals published by the “Circle of Friends of the Medal” between 1909 and 1915, only three were not commemorative in nature. Victor D. Brenner, whose “Motherhood” medal was a reworking of a plaque he produced in Paris in 1899, was a full time medalist. Isidore Konti, sculptor of “There’s No Place Like Home” only produced 3 medals during his career as a sculptor, while Sigurd Neandross, whose “The Oceans” medal is possibly the finest in the series, appears to have not produced any other medallic work. 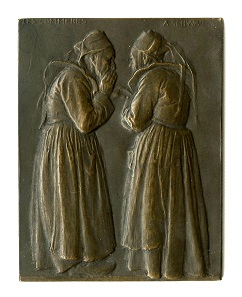 A quick examination of medallic work in the US prior to World War I reveals remarkably few art medals. Certainly, American medalists were capable of producing art medals, and often did during their student days in Paris. Thus, we have Brenner’s “Motherhood” plaque of 1899 (later used for the “Circle of Friends”) and Amory Simons’ “Deer” plaque. Of the 63 different designs exhibited by Brenner in 1910, only two could be considered as purely decorative. The Englishman Frank Bowcher created a charming music plaque while in Paris; Gilbert Bayes exhibited some wonderful art plaques during the 1910 International Exhibition of Contemporary Medals, but they are much too large to be considered as medals. Artists in the US and Britain who created medals at this time may have just been responding to market demand for them and working mainly for the commissions. In any event, it was many years before art medals were produced in these two countries in any quantity.

Despite the success of the modern medal, there were some who felt that the traditional methods were still the best, and questioned the legitimacy of medals produced as large models and later reduced. Much of this criticism seems to have come from Germany, including claims of weak technique, inadequate modeling and artificiality. However, within a brief period of time, the direct engraving of dies became a rarity. The cast medal, generally in bronze, remained in fashion somewhat longer, especially when produced as a larger piece. But even these, such as the Robert Louis Stevenson plaque by Augustus St. Gaudens, are sometimes deceiving. Cast medals and plaques, when available in a variety of sizes, indicate the use of a reducing machine at some point. 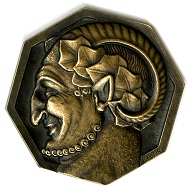 Choosing what to include in this exhibit was not always easy. There is often no real difference in the artwork between the commemorative and the art medal. The distinction exists only in the medal’s function. Take, for example, Marie-Alexandre Coudray’s 1899 “Orpheus”, which bears a small cartouche on the reverse, indicating the medal’s possible use as an award. Consider, on the other hand, Geneviève Grangers “Profile of a Young Woman”. The artist’s decision to exhibit it as a non-specific portrait turns what would otherwise be a commemorative into an art medal.

The majority of medals in this exhibition are European and date between 1878 and 1920. It is this period that saw the emergence and development of the art medal, often using new technology that some believed would threaten the quality of medallic art. They also started the discussion of what constitutes a medal – a discussion that persists to this day.

For more information on the exhibition go to the Medialia Gallery website.