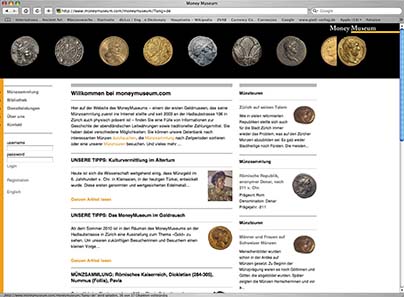 The private MoneyMuseum in Zurich

June 10, 2010 – In April 1999 the MoneyMuseum Zurich went online. In those days this was something very special, for in good old Europe the new Internet technology just began to disseminate to private homes. This first Internet appearance of the MoneyMuseum was based on the digital data file of the private collection of Dr. Jürg Conzett, which then included about 500 coins. It was brought together in cooperation with Dr. Leo Mildenberg and Marie-Alix Roesle, curator of the collection. 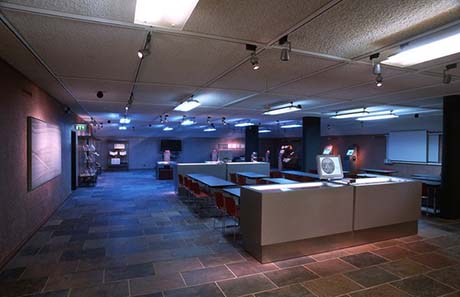 An insight into the MoneyMuseum.

You may think it to be a good joke that 500 coins formed the basis of a museum concentrating on money. But we have improved. We are now in possession of about 2.100 coins. This may be impressive for a private collection, but it is nothing compared to the traditional coin cabinets. Nevertheless, 2.100 coins are enough, because we do not need objects in coarse numbers. The MoneyMuseum sets a high value on the identity of collection’s items and potential exhibition objects. We want to make the greater part of our collection accessible to the public. Right now 25 % are on display. We strive for 60. Therefore we are not interested in highly important variants, but in coins, bank notes and other objects whose importance can be easily imparted to a wide public. That is the reason why the MoneyMuseum insists on the best quality when buying coins.

You see the MoneyMuseum understands itself not as a traditional coin cabinet. It sees itself as a kind of a platform where the historic example makes individuals discuss about money, its importance, its chances and dangers – and about one’s own idea of it. Therefore it is symptomatic that since the MoneyMuseum went online one site has surpassed all others in popularity, the site where our visitors can find out more about their own money identities. 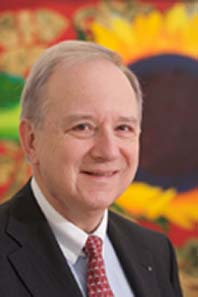 The MoneyMuseum understands itself as a dynamic project that keeps changing. Therefore all exhibitions and Internet sites are provisional. And this is the only possible explanation for the rapid development the Sunflower Foundation and the MoneyMuseum went through within the last 8 years. 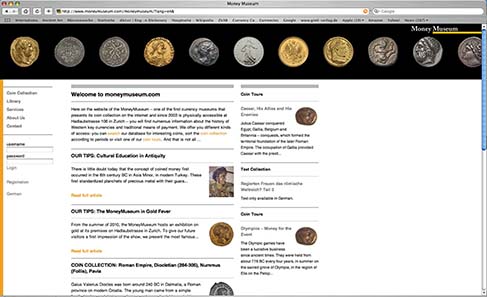 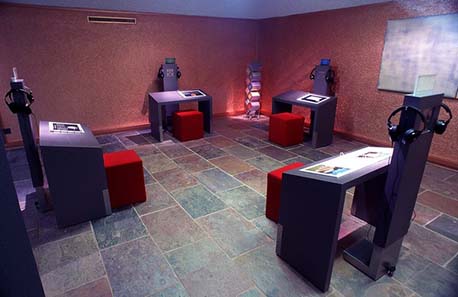 Audio points at the MoneyMuseum.

By the way, since February 2003 the MoneyMuseum does not need any more an out-office in another museum. At the Hadlaubstraße we dispose at the moment of an own exhibition area measuring about 500 square meters. Here a visitor will see above all a traditional coin exhibition occupying only about one third of the exhibition area. The rest is filled with screens and audio point. As I said, the MoneyMuseum does not focus on the individual object. We want to connect the coin, the bank note, and the currency with its historical, economical and social context. Therefore the MoneyMuseum has produced plenty of audio features, DVD presentations and movies, which a visitor can use at the MoneyMuseum. He also can take home most of them.
http://www.sunflower.ch/index.php?p=media_home offers the possibility to download the German or English version of most of them. Other museums are free to include a part of any of them within one of there own exhibitions. The MoneyMuseum is very willing to make everything available to everybody, as long as it is mentioned. We are for example very happy that the museum of the Burg Hasegg in Hall / Tyrol makes use of a part of our DVD „Minting technology“ within their permanent exhibition.

However, the Hadlaubstraße is more than a museum. It is a meeting point and a forum. We offer series of lectures concerning different aspects of money. But perhaps the term “lecture” gives a wrong impression. These events are assemblies offering enough time before and after the lecture to discuss the lecturer’s thesis while having a snack and drinking a glass of champagne. Between 30 and 60 guests are attending our events. Not bad, if you think of the many cultural institutions in Zurich who compete for visitors.
Our lectures are not at all confined to classic numismatics and money’s history, even if these are obviously not missing. On the contrary, Jürg Conzett tries to encourage our visitors’ interest and reflection by presenting new and unusual aspects of money. Subjects like money in literature, money in psychiatry and psychotherapy, money in popular songs or the question “Has culture to be (so) expensive?” open up new side-glances at our economic system.

A fundamental element of the Sunflower Foundation would miss, if I held back the social responsibility we are willing to shoulder. The MoneyMuseum regards it as one of its essential tasks to point out alternatives to today’s monetary system and to discuss them. We produced two DVDs and one book about complementary currencies. And we organized an exhibition, which compared the western history of money with the traditional Chinese monetary system.

While considering this problem the board of the Sunflower Foundation has decided that time-sharing circles deserve promotion. They seem to offer a reasonable way out of the problems we will have within some years, when the public old-age assistance will no longer be able to handle the multitudes of seniors needing care. Therefore the Sunflower Foundation has formed a new institution at the beginning of 2006. It is named zeta and it accomplishes a similar function as the MoneyMuseum. Zeta is a forum. Zeta supplies information and allows discussion. Zeta makes appropriate software free of charge available to those who plan to found a time-sharing circle. A member of the MoneyMuseum’s staff advises and accompanies time sharing circles before, during and after their foundation.

You see the MoneyMuseum is much more than a traditional coin cabinet. And we do our job with only five salaried employees.

Finally, let’s talk about the MoneyMuseum’s plans for the future, because stagnation and a rest on the laurels are not consistent with the Sunflower Foundation’s statutes, which fix the permanent change. Consequently Jürg Conzett is planing a MoneyWorld, which should be located in the former Bärengasse museum. It is thought to encourage reflection on money. Now, there are two equal conceptions, how the four floors could be used. Both have two characteristics in common: First, the historical part is not based on completeness – scenic settings will throw light on the phenomenon money from the different points of view. We also consider an active participation of the visitor. Second, the MoneyMuseum will stay a meeting point and a platform for discussion. The fourth floor will be converted into a center for seminars, where we will offer classes on different aspects of money. We also want to promote the MoneyMuseum as a location for events – we think that several banks will be interested to invite their guests to the MoneyMuseum.
As I said, the MoneyMuseum pleads for an open approach to money. So, here are the figures. The estimated costs for the reconstruction sum up to 4 or 5 million Swiss Franks.  The standing charges are now estimated at about 1 million Swiss Franks. We expect ca. 40.000 visitors a year.
Dr. Jürg Conzett wants to take over the Bärengasse museum in 2010, the opening could be in 2011 or 2012 – and then? We do not know. As I have said, the MoneyMuseum keeps permanently changing.