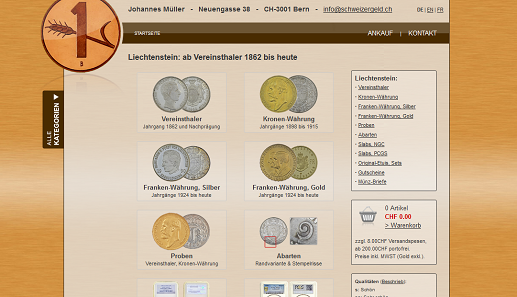 September 6, 2018 – At the beginning of 1719, the county of Vaduz and the Schellenberg estate on the Alpine Rhine were united. However, this was more than just a formal administrative act. January 23, 1719 is in fact considered the ‘birthday’ of the Principality of Liechtenstein, as we know it today. Since then, numerous circulation and commemorative coins, much appreciated by numismatists, have been minted that reflect the history of this small country and its monarchy. 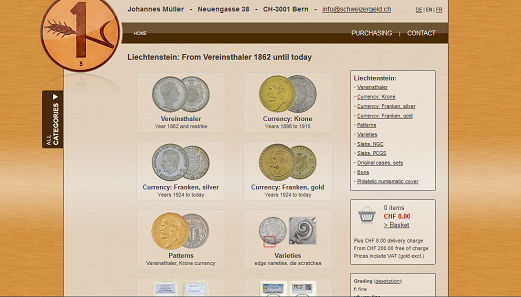 You can now find all Liechtenstein coins starting from 1862 in the Online Catalog of Swiss Coins and Banknotes.

In the run-up to the 300th anniversary of the Principality, a unique, free, online catalogue of all the Liechtenstein coins from 1862 was published as part of the Online Catalog of Swiss Coins and Banknotes, giving the collector an excellent overview. It shows not only the circulating and commemorative coins of the small principality, but also all the sample mintings and material samples. From the Vereinstaler of 1862 to the commemorative coin, variants, authenticity features, unusual varieties and even the original cases are shown; and for the first time the inscriptions on the edges are distinguished exactly according to their direction. The coupons in note form from 1920 will of course not be missing from such an overview. In addition, all the so-called slabbed coins of the two US companies NGC and PCGS have been separately catalogued. In recent years a separate market has developed for coins of extraordinary quality, sometimes at very high prices. This quality classification is intended to take this circumstance into account.

The birth of the Vereinstaler

The history of the Principality of Liechtenstein since its birth in 1719 can be divided into two phases. Up until the end of the First World War the small country maintained very close relations with its neighbour Austria; thereafter intensive cooperation with Switzerland began. 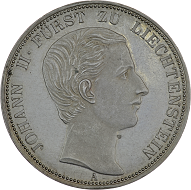 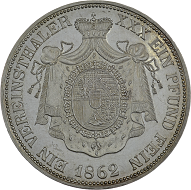 From 1852 onward Liechtenstein was linked to the Austro-Hungarian dual monarchy through a customs and monetary union. In the so-called Vienna Coin Treaty of 1857 Liechtenstein was conceded the right to mint coins intended for the Principality. This was effectively the birth of the Vereinstaler of 1862, which is well known among numismatists. However, the edition was limited and bound to the number of inhabitants in Liechtenstein. Twenty-four coins per 100 souls could be minted at that time, when the Principality had about 8,000 inhabitants; thus the main imperial-royal mint in Vienna struck a total of 1,920 Vereinstaler.

The coin shows the profile of Prince Johann II, who was then only 22 years old. He had already taken over regency of the country at the age of 18 and was to go down in its history as ‘The Good.’ He specifically promoted art and science and, particularly in the last years of his reign, modernized the Principality, the economy of which at that time was largely based on agriculture. On the back of the Vereinstaler you can see the large national coat of arms with the chain of the Golden Fleece.

These coins had a mainly representative character. Due to the small number of coins, the Vereinstaler did not play a significant role in the circulation of money. In addition, the Vereinstaler proved to be extremely uneconomical. While the minting of the specimens cost 4,126 guilders, the Vereinstaler only had a market value of 2,880 guilders. In 1880 a Vereinstaler cost 20 guilders. Exactly 30 years after its introduction, this coin was declared invalid. 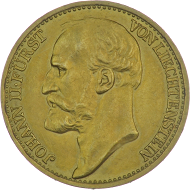 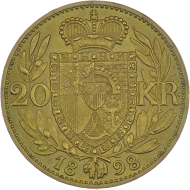 Popular with coin dealers and tourists

Shortly before the turn of the century – in 1898 – the first krone coins were minted in accordance with the law on the introduction of the krone currency. On them you can also see Prince Johann II, but looking much more mature and sporting a beard. The much-noted face design was created by Anton Scharff, director of the Vienna Academy of Engravers. Only 1,500 of the 20-krone pieces were placed into circulation, as were of the gold 10-krone pieces in 1900. 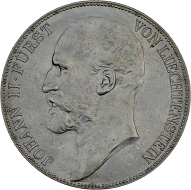 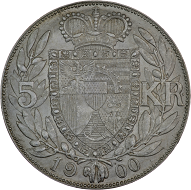 Significantly more coins were minted of the large silver 5-krone coin in 1900, 1904, 1910 and 1915 – a total of 40,000 pieces. Of the 2-krone silver coins, 87,000 were minted, of the 1-krone coins 50,000 were minted in 1900. By 1915 250,000 had been minted. This makes it the most common Liechtenstein coin to this day. Even then it was very popular with tourists and coin dealers. By 1914 most of these coins had disappeared from circulation. After the outbreak of the First World War, the Vienna Mint was only able to obtain very small quantities of silver and copper. Only thanks to the very good relations with the Principality of Liechtenstein was it possible to mint further 1-krone coins in 1915. 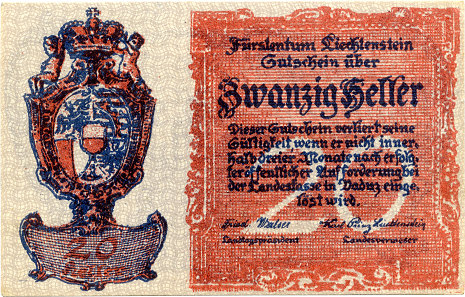 On November 25, 1919, the Parliament of the Principality had to deal with another problem. As a consequence of the First World War, there was an acute shortage of small change in the country. The government was therefore instructed to produce and distribute emergency bank notes. As early as January 5, 1920 the emergency bank notes came onto the market in denominations of 10, 20 and 50 heller, each with a circulation of 200,000. A 100-krone banknote didn’t get beyond the stage of a draft. It ended up in the state archives.

After the First World War, the Principality of Liechtenstein deepened its relations with neighboring Switzerland. This has not changed to this day, even if Liechtenstein occasionally takes a different approach to foreign policy. In contrast to Switzerland, the Principality is a member of the European Economic Area (EEA), a deepened free trade zone with an integration status between the EU and EFTA. 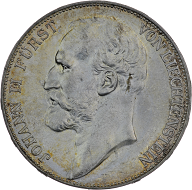 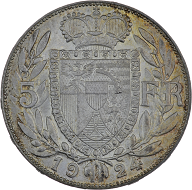 The era of franc coins begins

Nevertheless, since 1924 Liechtenstein has been using the Swiss franc, which has been the official national currency ever since. However, in 1924 silver coins of five, two and one francs, and of half a franc, were produced in the Federal Mint in Bern for the Principality. The circulation was between 10,000 and 95,000 pieces. However, on November 11, 1930, Liechtenstein withdrew its silver coins. Around 77 percent of the coins issued actually ended up in the melting pots of the Swiss Confederate Mint, putting an end to Liechtenstein’s monetary circulation.

Nevertheless, Liechtenstein was still allowed to mint gold coins as symbols of sovereignty, although these were not regarded as a means of payment. In the early 1930s, for example, 10- and 20-franc gold coins came into circulation (with a mintage of 2,500 coins each). 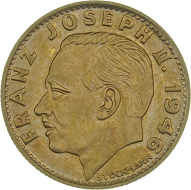 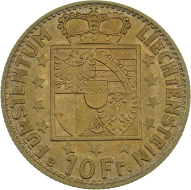 In 1946 Prince Franz Josef II’s first coin was minted in 10- and 20-franc pieces with the profile of His Serene Highness. The coat of arms on the back is surrounded by eleven stars representing the 11 communities of the Principality. 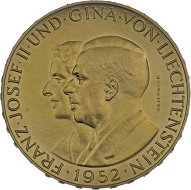 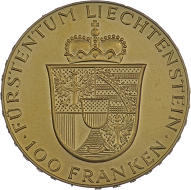 The 100-franc coin from 1952, minted in only a very small quantity and consisting of over 29 grams of fine gold, is today certainly the best-known Liechtenstein rare coin. This commemorative coin was issued on the tenth wedding anniversary of Prince Franz Josef II and Princess Gina. The 25- and 50-franc coins, minted later, bear the same face design as the 100-franc coin. 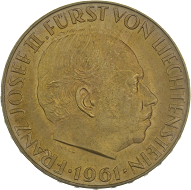 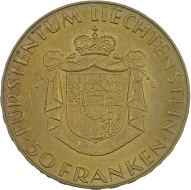 In 1961, on the occasion of the 100th anniversary of the Liechtensteinische Landesbank, the Liechtenstein Parliament decided to again issue 25- and 50-franc gold coins, with a new portrait of the now elderly prince. The coins were initially placed in the vaults of the bank as a gold reserve but were not put on sale until 1985. 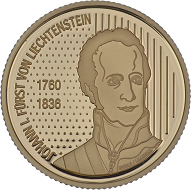 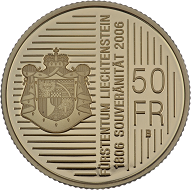 The latest coins were minted on the occasion of the 200-year sovereignty of the Principality of Liechtenstein in 2006. The friends of Liechtenstein numismatics will therefore be hoping that on the occasion of the 300th anniversary of the Principality, to be celebrated on January 29, 2019, an appropriate commemorative coin will numismatically mark the centennial event.

Visit the first Swiss virtual and free catalog of coins and bank notes by Johannes Müller, which now includes Liechtenstein coins from 1862.