September 20, 2012 – It is still charming how unscrupulously adventure films featuring knights confound the epochs. May it be ninth or fourteenth century, the knights take their lances and unhorse the bad guy, anyway. However, the tournament was a sport whose rules and fashion were changing during the Middle Ages too. Come along with us to Sankt Wendel where a tournament was reenacted in which Maximilian I might have well participated.

Exactly 500 years ago Emperor Maximilian I visited the town of Sankt Wendel whose prominence in the Middle Ages was due to St Wendalinus. Because his relics were deposited in the church that was much attended by pilgrims. On March 31, 1512 Emperor Maximilian I reached the town. He was staying in Trier for the Imperial Diet but maybe he was bored. Hence the Emperor went on a trip passing at the small town of Sankt Wendel where he stayed overnight. Actually we do not know much more about this trip at all. However the administration of the very active district town decided to honour this event by giving a tournament in which the ‘Last Knight’ might for sure have whished to participate. 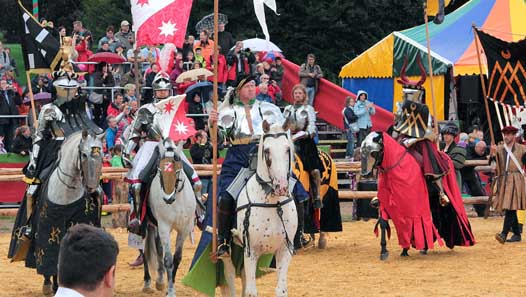 During the last years the Fürstliche Hofreitschule Bückeburg has specialised in reenactment, that is in reviving past feasts and spectacles where riding plays an important part. In these events it is not just dropping excitingly from the horse like stuntmen. Here you will not find any lances made of balsa wood or half-sawed weapons. Here they actually fight with real lances. Armour and dresses correspond with the historical epoch as well as weapons and tack. Even the riding style reportedly conforms with that of the knights from 500 years ago.
Did you know, just to cite an example, that the horses of the knights were renowned for their size, however you should not confound them with the rather plump draught horses. They were smaller but in proportion extremely strong, very intelligent and had excellent training over a very long time. 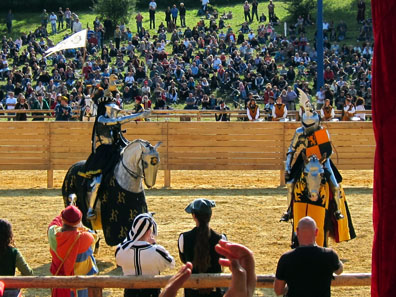 Just before the joust the knights pay their respect to the ladies. Photo: KW.

This was absolutely necessary for shaping a single body out of horse and rider, on its turn a prerequisite for making the horse gallop toward another horse and allowing thus his own rider to break his lance on his opponent’s shield.
And that was in the end the goal of the tournament’s first part. It was not necessary to unhorse the opponent, but the lance was to break in a pretty way on the opponent’s shield or helmet. 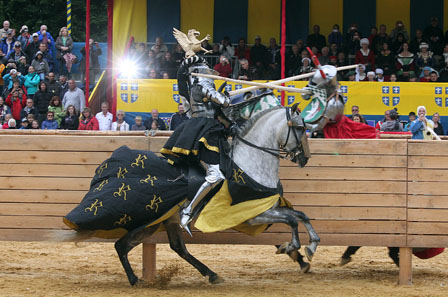 No points for the participants, although it looks great. Photo © District town Sankt Wendel.

One to seven points a knight could obtain per hit. He had to target at the shield or helmet. For the latter one acquired more points since the lance slipped off more easily than from a shield.
Barring the opponent or running with the left foot further than 40 cm from the tilt is considered a foul and the opponent will receive points.
In case the adversary is dismounted by a targeted hit on the shield or helmet the winner takes 20 points. 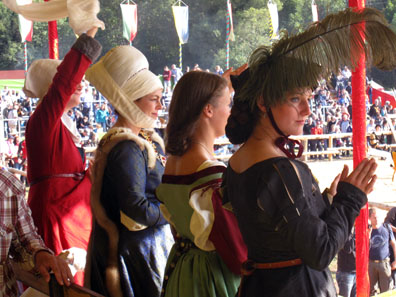 The ladies: they may intervene at any time. Photo: KW.

The ladies’ verdict is decisive. They have the possibility to judge the gallantry of the knights or how they treat their horses. Their sentence can change a man’s luck and render the loser a winner. 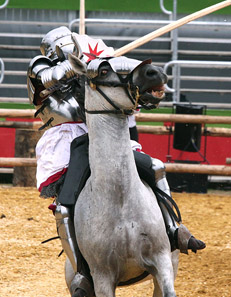 Don’t think that such a tournament is not dangerous! Photo © District town Sankt Wendel.

By the way, such a tournament is not without danger to be sure. Already after the first jousting session Dr Tobias Capwell – for twenty years passionate errant knight and curator of historical weapons in the Wallace Collection / London – was on his way to the hospital in order to get his thumb sewed on again, since it had been cut off by a lance. 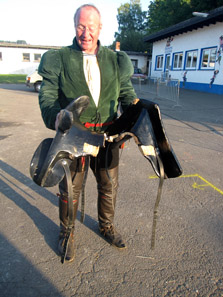 Tournament master Wolfgang Krischke after the tournament with a broken saddle. Photo: KW.

You may imagine the pressure the lances apply on the horses, knights and the equipment. Just take a look at this broken tournament saddle. And one notices that a typical riding saddle has nothing to do with a tournament saddle since the latter is extremely high in front and behind the rider to stabilise him during the contest. 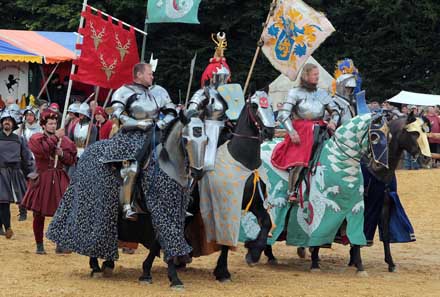 And here it comes to the mêlée! Photo: © District town Sankt Wendel.

Even more impressive than the joust – if possible – was the mêlée, that is the fight between two teams of knights. In the Sankt Wendel competition each team was composed of four knights and a squire bearing the banner. 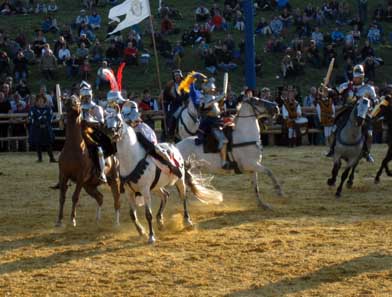 A look at the mêlée. Photo: KW.

In the mêleé the knights fight with blunt swords that were in this case substituted by wooden swords. The goal is to force the opponent out of the contest by striking him often from two different directions in a short period of time. For that purpose the riding ability is of the utmost importance since the exercises are executed in close combat. And suddenly you understand the figures of the Haute Ecole: the horse protects its rider with these moves and allows him thus to stay in the saddle.
Reportedly there are only some twenty man in the world who are able to revive the mediaeval chivalric sport at this level. They came even from New Zealand to Sankt Wendel to compete with each other in tournament. 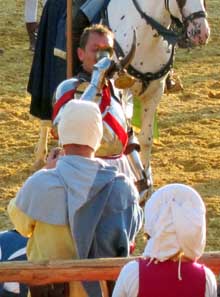 The winner of the day takes a drink from a horn. Photo: KW.

When the trumpeter blows the final fanfare, the mêlée is over. The team with most combatants on the field is the winner and every man out of that team is credited 25 points. Additionally the ladies can distribute 40 points for chivalry and riding ability to any man whether he may be of the winning team or the other. 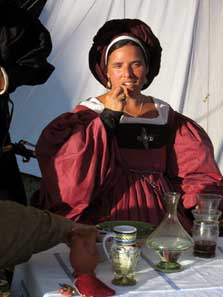 In the camp: splendid costumes and beautiful impressions. Photo: KW.

The tournament was though only the highlight of a whole day full of insights into the Middle Ages and the Early Modern Times. Various reenactment groups gathered there and offered beautiful images for the eyes and cameras. This is a female member of the ‘Compania Città del Grifo’ reawakening the campaining life of a military company under the command of the Republic of Venice. 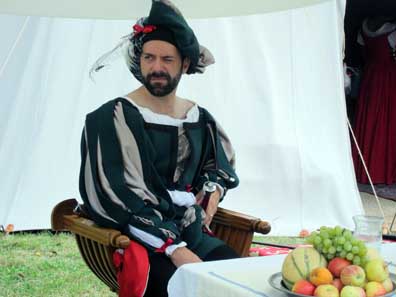 And her male colleague looks also as if he had just jumped out of a historical painting. 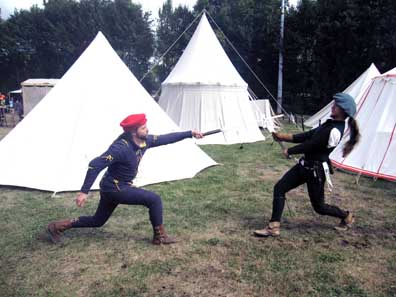 The group ‘Lebendige Schwertkunst’ (= Vivid art of sword fighting) displayed mediaeval fighting techniques they reconstructed thanks to fighting books from southern Germany from the thirteenth to sixteenth centuries. And even though I may disappoint those who have thought until now that fighting means first and foremost crossing swords, it is not so. You must not simply clout – otherwise the sharp blades would not tolerate it much. Instead there were many tricks and dodges to stab the opponent without much physical effort. 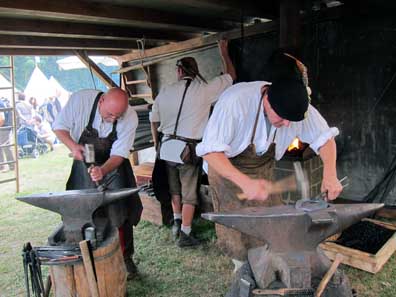 In the smithy. Photo: KW.

A smithy shows ancient ways of working iron. And do you notice what is wrong in this photo? An authentic smith would never roll up his sleeves on the outside since sparks might too easily get caught in it. 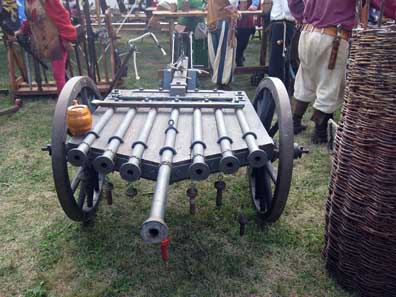 This was how a certain kind of artillery looked like in the late fifteenth century. Photo: KW.

Have you ever heard of a ‘Hornessel’? Well, you are not supposed to. It is the nickname given by the association ‘Brettener Artillerie 1504 e. V.’ to their last attraction, a kind of machine gun from the sixteenth century. Its steel barrels yield seven single detonations. And the racket it makes is simply deafening. Indeed only the ‘Fat Franziska’ is louder – a canon with a 400 kilo barrel that ejects a bullet of a diameter of approximately 8.5 centimetres lighting 320 grams of black powder. 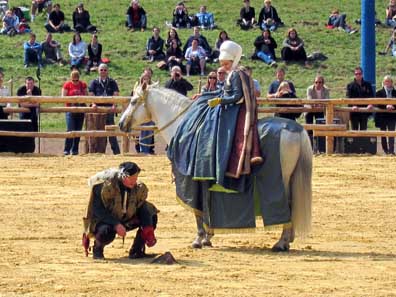 The lady, the falconer, and a merlin. Photo: KW.

‘Ten in one’ they called an English dish in vogue into which ten birds were stuffed first and then presented one after another to the astonished guests. Not only herons and swans but also smaller singing birds like the lark were captured for that purpose. And therefore very small falcons were required, here you see a merlin taken to the hunt by a lady. 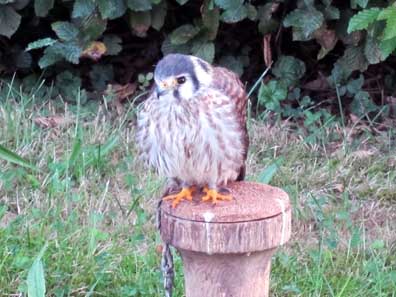 The merlin after hours. Photo: KW.

I admit that I fell in love with this cute small animal – and I was enthusiastic about the performance especially the very learned comments. The Hofreitschule Bückeburg gave an insight into the art of falconry with a couple of raptorial birds.

Whoever wants to learn more about the tournament, the knights, and the horses should visit this webpage by the city of Sankt Wendel dedicated to the Grand Tournament.

Of course there is a video clip on the topic on YouTube.

There they are not specialised exclusively on Middle Ages. Watch this video of a Baroque horse carousel displayed by the Hofreitschule in the royal palace Sanssouci.