September 18, 2014 – Last May, a Norman Rockwell painting was sold at British auction house Christie’s for the handsome sum of US$ 965,000. Since we’re talking Rockwell, this shouldn’t come as a surprise. After all, the American is one of the most popular 20th century painters – his omnipresence on postcards is proof enough. What is special about this painting, however, is its subject, which exhibits a very special connection to the world of numismatics. 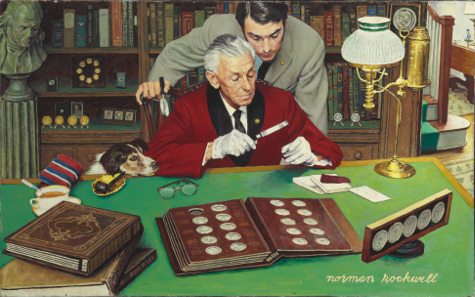 Rockwell became famous for his cover illustrations of the “Saturday Evening Post” that he painted for decades. His realist and photorealist style caused much doubt among art historians and critics as to whether his works could be considered “true art” at all. Apart from the fact that such a judgment should be considered highly doubtful in itself, no one really cares – Rockwell is a brand that reaches ceiling prices at every auction. But what was Rockwell’s motivation behind painting a coin collector and what do we see in the painting?

In 1970, the privately founded Franklin Mint commissioned Norman Rockwell with the design of templates for collector objects, coins, medals, tablets etc. Between 1970 and 1975, the artist produced more than 80 objects for the mint. It is in this context that two paintings, one of them “The Collector”, were born.

The depicted collector is an elderly, elegantly dressed upper-class gentleman sat behind his desk, who is examining the coin in his white-gloved hands through a magnifying glass. A cup of steaming hot tea and a pipe ready for use are his accessories. At his side, an eager young man, likewise equipped with a magnifying glass, who is inspecting the coin as intently as the curious dog trying to get a look over the edge of the table. And there is one more spectator: in the background, in front of the book shelf, a bust of Benjamin Franklin, famous name giver of the Franklin Mint, is observing the scene. The auction catalogue informs us that the bust was modelled on a souvenir which Rockwell had bought at the Louvre. But the artist directs our gaze elsewhere.

On closer inspection, you can at least suspect that the Franklin Mint’s products correspond to the collector’s interest: modern coinage. Nevertheless, the book shelves are well endowed with reference books.

Today, the Franklin Mint not only merchandises all sorts of collector’s objects but also wine, patriotic miniature sculptures and more. Well, times change. But did the Mint’s customers in 1970 really all look like the gentleman in Rockwell’s painting? I doubt it. It would be more appropriate to talk about an idealised image. It is curious, though, that this ideal didn’t change noticeably during the last decades. Which collector would not enjoy a quiet hour with his coins, lost in contemplation, perhaps having a nice cup of tea? And of course every collector wants to hand down his precious objects to someone equally enthusiastic and knowledgeable. Ideally the junior, trained by the collector himself. In this respect, at least, the painting captures a timeless ideal. And at the same time, the rare case in which the painting of a coin collector itself becomes a highly valued and expensive collectible.

Read the description of the painting by Christie’s here.

The Norman Rockwell Museum is responsible for Rockwell’s artistic legacy.

If you are interested in the artistic quality of Rockwell’s Evening Post covers, just check out one of the many poster shops which sell hundreds of Rockwell posters.

Click here for the comprehensive portfolio of the Franklin Mint.