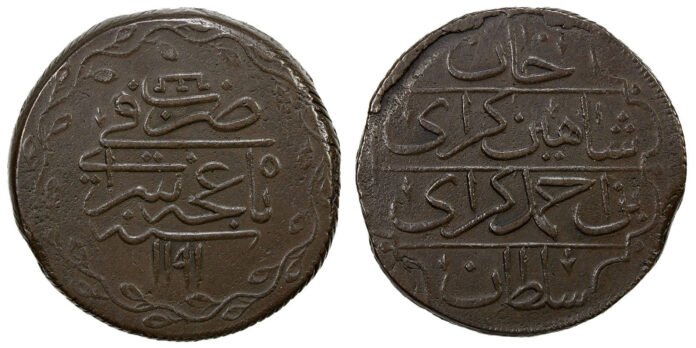 Stephen Album Rare Coins has published their 4th Internet-Only Auction. Bids can be placed now on the bidding website, and live bidding is also available during the live session which begins at 10:00am PDT on Monday 15 July 2019. The sale features exactly 600 individual coin lots with starting prices ranging from 20 USD to 500 USD.

The coins in the sale range from all areas and time periods, including ancient coins, medieval Islamic coins, modern machine-struck coins from all continents, as well as a small number of modern coin issues.

One category that is expected to perform well is China, which includes a small selection of coins from the Don Erickson Collection of Chinese Coins. Totaling approximately 80 coins, these lots consist of mostly PCGS graded minor coinage from the Republican period as well as provincial issues. The majority of the coins are in choice grades.

Another fascinating grouping is a listing of 34 lots of the Giray Khans, a dynasty that ruled in Crimea from the 15th to 18th century. Included are many rare rulers and types that savvy collectors will take note of.

An additional single highlight is a rare variety of a United States colonial cent from New Jersey, which as of this writing has already been bid up to 850 USD by pre-sale bidders.

All bids must be placed through the online bidding website.