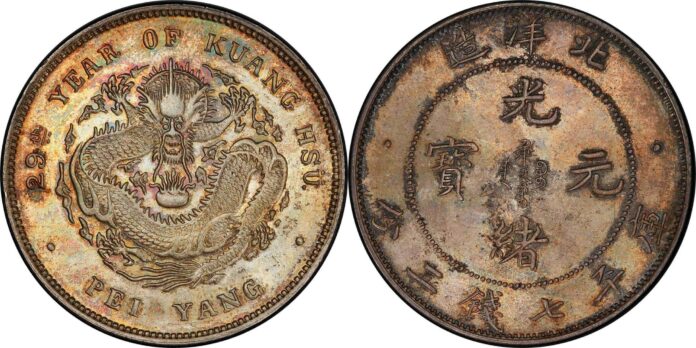 Stephen Album Rare coins will hold its Auction 38 on September 24-27, 2020 at its offices in Santa Rosa, California. The auction is made up of an even 4,000 lots of Ancient, Islamic, Chinese, General World, and Indian Coins.

Featured in this sale are two Chihli Specimen Dollars from the Peiyang Mint from the Richard Bagge Collection. The two Chihli dollars are the first of the year 29 Peiyang dollars graded by the major grading companies as specimens. The Peiyang mint had just been rebuilt in 1902, necessitated by its destruction during the Boxer Rebellion. These dollars were likely gifts to Richard Bagge, a Swedish diplomat based in Shanghai, upon the reopening of the mint. These coins are of the utmost rarity. They are sure to be a major highlight.

Another sure highlight will be the Dabestani Collection of Persian Coins, which includes many rare gold and silver coins that were unpublished when they were acquired. One particularly stunning example from the collection is Lot 659, a gold presentation toman issue of Fath ‘Ali Shah. It features a portrait of the king seated on a throne and is one of the rare earlier issues struck to the sahebqirani standard. A superb example, it is graded MS62 by PCGS.

Here you can browse through the online catalog.

July, 2. 2020
Auction 37 set a new record for Stephen Album Rare Coins with a total price realized of $1.85 million. A Chinese Pavilion dollar sold for an astounding price of $130,900 – more than three times the previous sales records for a Pavilion dollar.
error: