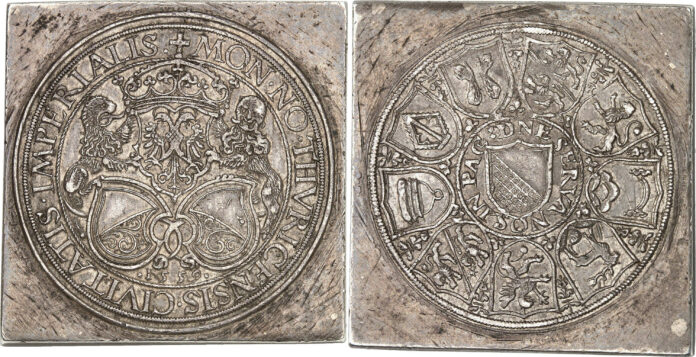 It wasn’t a new idea to strike coins no longer by hand but to use a machine for it. In Augsburg, clever engineers had developed the first minting machines for the French royal court, which were used by Henry II (1547-1559) to have representative showpieces minted. However, these machines didn’t become the standard. There were economic and social reasons for this, as we learn from a memorandum written by Rheinhard the Elder, Count of Solms, to convince Ferdinand I to buy the roller press he had developed with the help of Augsburg engineers. What Reinhard considered the greatest advantage of the new machine was that one could finally replace the demanding and costly mint masters along with their overpaid assistants with simple smiths. And that’s precisely why all the craftsmen of traditional mints boycotted any new, more efficient form of minting: they feared losing their privileged position.

Therefore, it’s no surprise that the first person to use a working roller press wasn’t a mint master but goldsmith and politician from Zurich.

First, we have to answer the question of why it was necessary for Zurich to mint so many coins in the 1550s. For this purpose, we have to go back in history a scant twenty years.

In 1531, the Council of Zurich placed secularized church properties under its own administration. In the eyes of pious councilors, what was supposed to support the poor was much better suited for paying off the debt that the city had incurred as a result of the Second War of Kappel. Once these debts were settled, the Council used the revenue generated between 1540 and 1550 to buy sovereignty and territories around Zurich. Hans Hüssy investigated the money spent on this in his unpublished dissertation of 1946. He found that over ten years, more than 100,000 pounds had been injected into Zurich’s expansion of power.

The pounds he referred to weren’t minted coins but a unit of account. One pound equaled 8 theoretical batzen or 20 theoretical schilling, while the pound’s value against real batzen and real schilling actually did fluctuate, depending on how much the price of silver rose or fell. Nevertheless, even if we convert the 100,000 pounds into schilling of account, we are left with an impressive 2 million schilling that was spent on this increase in power. And this, in turn, means that the Zurich Council generated a surplus of an average of 10,000 pounds or 200,000 schilling of account each year from confiscated church properties.

It seems like there was nothing left to buy in 1550, and so the Zurich Council decided to hoard most of this surplus in the sacristy of the Grossmünster, in the form of high-quality talers, which were to be produced according to the 1551 Imperial Minting Ordinance. The rest of the silver was to be struck into high-quality fractional coins in order to promote trade in Zurich.

The city of Zurich commissioned an experienced craftsman with the production of the coins, Sankt Gall mint master Hans Guteson. In the six years of his work, he produced 984,772 talers and 60 million groschen as well as 2.6 million smaller coins with the help of 58 assistants. However, we won’t focus on him but on someone who entered the field with a different background, and whose roller press did not only shape talers but also monetary history: Jakob Stampfer.

Jakob Stampfer was born around 1505/6 as the son of a Zurich goldsmith. After completing an initial apprenticeship in his father’s workshop, he probably went to Augsburg to complete his itinerant years. Although there’s no archival evidence of Stampfer’s stay in Augsburg, we can assume that he worked as a journeyman in this South German center of goldsmithing for stylistic and logical reasons. We already heard that technicians in Augsburg were experimenting with roller presses. Therefore, Stampfer may have seen prototypes, drawings, or models of roller presses in Augsburg.

In 1530, Jakob Stampfer returned to Zurich and started his career. He became master of the Zurich Kämbel Guild in 1533. In 1539 he was appointed examiner. In 1544 he was a member of the Large Council, in 1555 member of the Small Council. And Stampfer had already been a member of all high-profile commissions that dealt with matters of coinage since 1553 – one year before Gutenson was hired.

At some point around 1558, Stampfer also began to mint coins on behalf of the city of Zurich. We don’t have a certificate documenting his being commissioned as in the case of his colleague Gutenson. However, the characteristics of Stampfer’s products clearly indicate that they weren’t produced by the hammer of an assistant but a roller press.

What was so revolutionary about the roller press? Well, rolling mills had long been used by mints to flatten metal strips to a precisely defined thickness. The new element were two rollers with the coin design engraved on them in such a way that it was pressed onto both sides of a long metal strip under the high pressure applied by such a rolling mill. As a second step, the coins were punched out of the metal.

Our triple taler klippe, which will be on offer in the upcoming Künker auction on 2 February 2023, was made with such a roller press. Typical for such an issue is the constant and even amount of pressure applied to the metal. Despite the thick blank and the precisely engraved die, you can see all the details of the coin design. No mint assistan, no matter how skilled, was able to produce such an evenly struck coin with a hammer.

The great talent of Jakob Stampfer was to adjust the rollers in such a way that obverse and reverse were exactly opposite each other, while keeping the metal flow resulting from the minting process into account when engraving the coin design. Stampfer managed to do both. He was a master of his craft, which is also proven by the artistic quality of his work.

The worked parts near the edge of the klippe outside the motif should not come as a surprise. When working on the coins, they removed the marks of the knobs that made sure the metal strip could be pulled slowly and steadily through the roller. Due to its heavy weight, we can assume that the klippe was supposed to be a diplomatic gift. And such a gift should obviously turn out as beautiful as possible. By the way, we can still see the marks of the knobs on some other klippe issues; occasionally, this pattern was even used as a decorative element.

The Zurich Roller Press and Its Impact

In 1561, Hans Gutenson’s contract came to an end. From then on, Stampfer was the only one responsible for Zurich’s coinage. By this time, the mass production of coins was over; we can only speculate as to why. Perhaps Zurich also suffered from the first harbingers of the Little Ice Age, which drastically reduced harvests of all kinds. Perhaps the harvests of the confiscated church properties no longer generated enough revenue to create large reserves.

In any case, Jakob Stampfer no longer got enough orders for his roller press. Therefore – sometime in 1562/3 – he gathered a consortium to help him sell his invention to foreign princes. They knew that people were interested in the machine. The Gubernator of Milan, for example, wrote a letter to the Zurich Council in 1561 asking them to inform him about the experiences they had had with Stampfer’s roller press. In 1563, high administration officials travelled from Innsbruck to Zurich to see for themselves how efficient the machine was.

Nevertheless, Stampfer didn’t become a major coin producer. The reason for this might lay in the fact that too many people wanted to make too much money with his invention. Although they didn’t own a roller press, they had developed a great talent for intrigue and deprived Stampfer of profitable contracts by making unrealistic dumping offers to foreign princes. Time and again, Stampfer had to take legal action to protect his rights. At some point, he probably lost the enthusiasm for his invention.

In 1566, he took over the Zurich bailiwick of Neuamt. Three years later he became reeve of Wädenswil. It must have been much more pleasant to make a living as an administrative official in Zurich. Stampfer died on 2 July 1579.

It wasn’t Jakob Stampfer but a member of his consortium who made sure that the Zurich machinery eventually spread throughout the world. Hans Vogler succeeded in installing a working roller press at the Hall mint in Tyrol, which became the model for all Habsburg roller presses, which soon also minted silver in Spain and the New World. Vogler himself earned nothing from it. He had set his price much too low.

The Triple Thaler Cliff as well as other exciting coins can be found in the catalog for the upcoming auction.

And don’t miss this article on Jakob Stampfer and his revolutionary invention.

October, 29. 2020
On 2 and 3 November 2020, auction house Künker in Osnabrück will auction off the library of coin dealer Alain Poinsignon. Just like every great library, it contains books that were previously owned by other numismatists and coin collectors. Bookplates tell this story. And we tell some stories about the bookplates.
error: