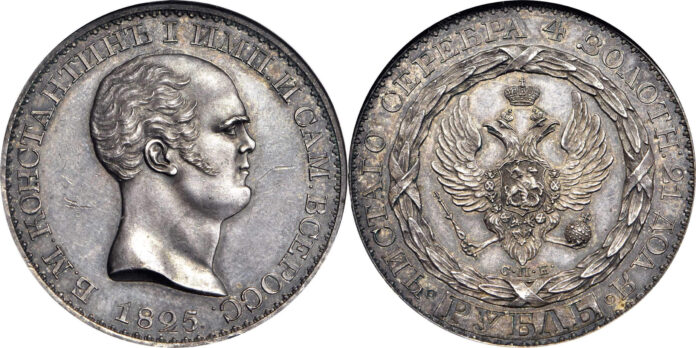 In the first coin session of their April 2021 Hong Kong auction, Stack’s Bowers and Ponterio eclipsed their highest total for any previous Hong Kong auction, realizing nearly $19.2 million for the 162 lots in “The Pinnacle Collection”. Fierce competition for the incredible offerings in this cabinet resulted in five lots crossing the $1 million mark, two of which brought more than $2 million. Combined with the outstanding results of additional live and internet auction sessions, the April 2021 Hong Kong auction becomes the firm’s highest value sale of non-United States numismatic items, likely to surpass $35 million by its conclusion on 11th April 2021. The unprecedented results from this auction affirm Stack’s Bowers and Ponterio’s expertise at maximizing results for consignors in the current numismatic market.

Among the standouts was the 1825 Pattern Ruble of Constantine, which realized $2.64 million – a personal best for the firm, representing the highest amount achieved by any American auction house for a non-US coin. This was followed closely by the fantastic “Mukden Tiger” Pattern Dollar that sold for $2.28 million, the highest amount ever garnered for a Chinese coin, obliterating the previous record.

Records were also set among Japanese coins as the incredibly rare first Oban from the Tensho Era brought $1.92 million, now the most expensive Japanese coin. A record for modern Japanese coins was established as the important 1870 Pattern Set – unique outside of a museum – fetched $1.56 million. Closing out the five $1 million lots was one of the finest seen Long-Whisker Dragon Dollar Patterns, which realized $1.02 million.

Other stunning prices included a Silver Tael Pattern from Year 29 of Kwang-hsu (1903) and a 20 Yen from Year 10 of the Meiji Emperor (1877), each of which brought $840,000, and a beautifully toned Silver Dollar Pattern from 1907 that sold for $504,000. A Filipino 8 Escudos countermarked over a Mexican Iturbide issue brought $180,000, becoming the most valuable Filipino coin and nearly tripling the previous highest price for a Filipino issue.

“The World’s Most Expensive Non-US Coin”

The sale included the “Joseph/Richter” specimen of the incredibly rare 1825 pattern ruble of Constantine sold for an astounding $2.64 million. This was the highest realization in the magnificent Pinnacle Collection. This monumental, once-in-a-generation crown is among just eight known, and one of only three with a plain edge. The last appearance of an 1825 pattern ruble of Constantine was in 2004, when this very specimen sold for $525,000, the highest amount for a non-US coin at the time. Though it no longer holds this record, this storied ruble now stands as the highest valued non-US coin auctioned by an American auction house and illustrates Stack’s Bowers and Ponterio’s continued leadership in the numismatic market across the globe.

Issued for the would-be emperor, Constantine Pavlovich, the pattern ruble stands as the only coin produced for a reign that never really happened. Constantine was the middle son of emperor Paul I, and was seemingly destined for a life as the “spare” to his elder brother’s status as “heir.” Following Paul’s assassination, Alexander (the elder brother), Constantine, and Nicholas (the younger brother), were all understandably weary of the crown’s burden. When Alexander died rather unexpectedly – and, more importantly, without a legitimate heir – the duty fell to Constantine. Mint officials, mindful that coins reinforce the divine right of a ruler to the masses, immediately began producing a prototype so that official coinage could continue without interruption. Constantine, however, had other plans; he decided, after just a few weeks, that he wanted no part of his tsarist duty, abdicating the throne in favor of Nicholas. In a flash, a would-be reign was brought to an end before it officially started. But what about the prototypes created by the mint officials? During this period of uncertainty, some eight examples were produced – five with edge lettering and three without. Rather than entering the melting pot, they were fortuitously preserved, with the five lettered edge specimens held for safe keeping within the Ministry of Finance and the three plain edge examples seemingly held by the officials present during their striking.

As the decades passed, the lettered edge rubles were obtained and dispersed by then-tsar Alexander II. Of the five, three are now held in museums (the Hermitage, the state Historical Museum in Moscow, and the Smithsonian). The remaining two have sold publicly and are presumably still in private collections. One last appeared in Bowers and Merena’s 1994 Baltimore auction, while the other has not officially been seen since 1898. Turning to the plain edge examples, all three have had a presence in the marketplace, but only this impressive piece from the Pinnacle Collection has been seen since 1981. It last crossed the auction block in January 2004, and since then the rare coin market has enjoyed tremendous growth and prosperity, especially during the past year. When the gavel last fell for this monumental pattern issue, a record was established, making it the most valuable non-US coin to sell at that time. Nearly two decades later, the once lofty hammer price of $525,000 has been eclipsed by a factor of more than four.

You can read more about it in this article on the record rouble.

Complete prices realized for the Stack’s Bowers and Ponterio sale of “The Pinnacle Collection” (and further sessions of the April 2021 Hong Kong Auction), are available on the firm’s website at Stack’s Bowers website.

For information about consigning to an upcoming auction call 800-458-4646 or email.