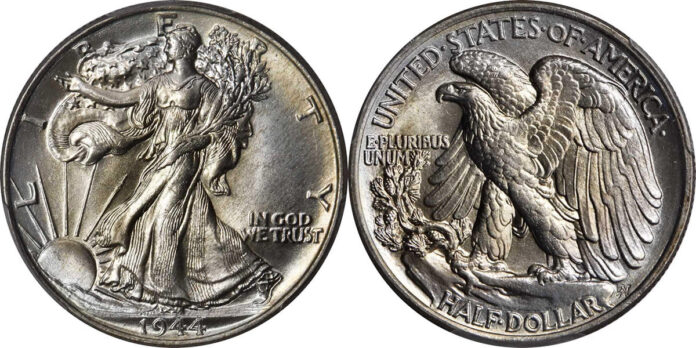 Stack’s Bowers Galleries announces their June 2021 Showcase Auction, the first event to be hosted at the state-of-the-art auction gallery in the firm’s new Costa Mesa, California headquarters. Live bidding will take place on 10th and 11th June 2021, with Internet Only Sessions held the following week from 14th to 16th June 2021 on the firm’s website.

The Lulu Collection includes the #1 all-time finest PCGS Walking Liberty Half Dollars Short Set, 1941-1947. Nearly all 20 half dollars in the Lulu Collection Short Set rank at the very top of the PCGS Population Report, with the majority also approved by CAC. Assembled with a focus on strong luster and beautiful toning, the Lulu Collection matches exceptional eye appeal with superior surface quality. With an amazing nine coins graded MS-68 or MS-68+, the Lulu Collection represents perhaps the most important offering of Short Set dates in decades. Highlights from this impressive cabinet include MS-68+ CAC examples from 1942 and 1943, a 1943-S in MS-67+ CAC, and a 1944 in MS-68 CAC.

A Short Set comprises the second part of the two-folder set for Walking Liberty half dollars produced by Whitman in the mid-20th century. The first folder contained most of the series from 1916 through 1940, with the balance included in the second “shorter” folder. Many decades later, this Short Set format has been embraced by modern collectors and continues to be a highly competitive approach to the series. As the Short Set includes the wartime issues of 1942-1945, it draws significant demand from World War II enthusiasts, as well.

Consisting of just 20 coins, the Short Set can be readily completed in lower Mint State, but is a significant challenge at the highest levels of preservation and production quality. The Lulu Collection, at the very pinnacle of these standards, will be a landmark offering for Walking Liberty half dollar specialists.

The Norman G. Peters Collection of Colonial Coins has been a half century in the making and Stack’s Bowers Galleries will be offering this lifetime collection in a series of auctions in 2021. Included in the June sale is Norm’s Massachusetts, St. Patrick, Rosa Americana, Wood’s Hibernia, and Voce Populi coinages, Nova Constellatio and Vermont coppers, Machin’s Mills halfpence, Washington pieces, Fugio coppers, and many other colonial types, highlighted by a lovely and previously unrecorded 1787 Vlack 17-87E Machin’s Mills halfpenny and a gorgeous 1777 Franklin of Philadelphia medal in bronze.

The Bimyway Collection features an impressive selection of silver dollars and Saint-Gaudens double eagles, many of which have also been approved by CAC. Highlights offered in the June event include an EF-45 (PCGS) 1797 Draped Bust dollar and a 1907 High Relief $20 graded AU-55 (PCGS) CAC.

The firm will also offer a selection of items from the James D. Brilliant Collection, a cabinet that Stack’s Bowers Galleries first handled in January 1992. While most recognized for early half dollars, this offering also includes desirable 19th century gold coinage as well as a famous “1776” Continental dollar and an iconic 1796 Draped Bust quarter.

Beyond these cabinets, Stack’s Bowers will be presenting additional half eagles from the Fairmont Collection, as well as numerous individual rarities. Among the latter are a MS-64 BN (PCGS) Bar copper from the 1906 Harlan P. Smith sale, the Wolfson-Pogue 1820 BD-7 half eagle graded MS-65+ (PCGS) CAC, a newly discovered MS-62 (PCGS) CAC 1876-CC half eagle, and a desirable VF-35 (NGC) Paquet Reverse 1861-S $20.

This exciting sale arrives on the heels of the firm’s record-setting auctions in March and April that saw combined prices realized above $60 million. With seven individual lots exceeding $1 million in these spring sales, Stack’s Bowers Galleries is clearly poised for a robust summer auction season. The Stack’s Bowers Galleries June 2021 Costa Mesa auction is available on their website for viewing and bidding via high-resolution images and their award-winning bidding platform. To register for bidding in the June Showcase Auction or to consign to the firm’s August ANA Auction, contact the Stack’s Bowers Galleries Auction Services team at 800-458-4646 or via e-mail.

September, 3. 2020
The Stacks Bowers’ August 2020 Auction realized a total of $21,739,851 across all categories. While the majority of this sum was realized for US Coins, there were also multiple highlights and impressive collections from the fields of ancient and world coinage.
error: