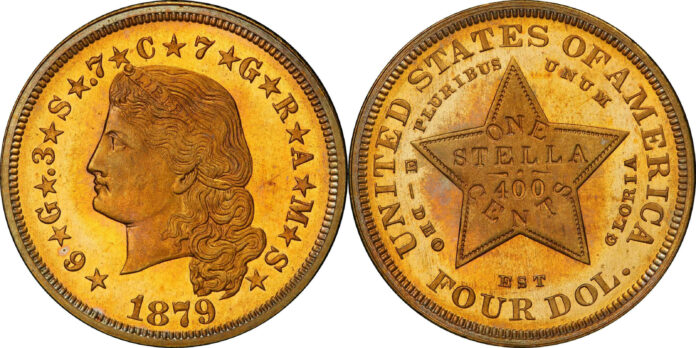 Against a backdrop of economic uncertainty and negative indicators, rare coins continued to shine at the Stack’s Bowers Galleries March 2020 Auction in California. Nearly three years after Part V of the D. Brent Pogue Collection hit the market, the most valuable coin collection ever sold cemented its grip on the record books with more than $15 million in additional sales. To date, the Pogue Collection has realized $122,012,480 for the coins and $131,298,560 total, including the paper money collection sold on March 19. Originally scheduled to be held in Baltimore, the auction was moved to the Stack’s Bowers Galleries headquarters in Santa Ana following the cancellation of all public events in the state of Maryland and was hold on March 19-20, 2020. With most bidders participating online, the 420 lots realized 104% of their presale high estimates, which were determined well before recent economic difficulties. (All prices include the buyer’s fee.)

While the Pogue Collection is renowned for its superb quality pre-1834 coins and legendary rarities, the Pogue VII sale featured collections that showed the remarkable breadth and depth of the Pogue holdings. While red-letter issues like the Berg-Garrett 1804 dollar and the finest known 1854-S half eagle reached seven-figure heights, the superbly preserved and spectacularly toned Pogue Washington quarter set brought multiples of estimate, Barber quarters reached dizzying heights, and even Eisenhower and Susan B. Anthony dollars achieved exceptional prices. Collectors also competed over the Pogue “lowball” set, with the world’s worst examples of some types bringing multiples of what well-preserved examples regularly bring.

The two leading lots were among the most famous rarities in the entire realm of United States coinage. Leading all sales was the finest known example of the legendary 1854-S half eagle, the first $5 gold coin struck in the San Francisco Mint. Pedigreed to the Eliasberg Collection, the PCGS AU-58+ Pogue coin is the best example of the three confirmed to still exist. It realized $1.92 million after 38 years off the market. An example of the “King of American Coins,” the Berg-Garrett Class III 1804 dollar, brought $1.44 million. It was graded Proof-55 (PCGS).

At $408,000, the famous “Little Princess” 1841 Proof quarter eagle from the Pogue Collection set a new world record for the type. Pedigreed to the Eliasberg and Bass collections, the Pogue specimen is graded Proof-64 CAM (PCGS) and is considered the finest in private hands.

A small group of medals also performed well, including the Pogue silver Libertas Americana medal in PCGS MS-63 at $144,000, and a bronze Libertas Americana medal in PCGS MS-64 BN at $33,600. The Boyd-Ford Washington-Franklin Peace of 1783 Baker-58 medal in silver, graded Specimen-64 by PCGS, brought $28,800. A copy of Henry Tuckerman’s The Character and Portraits of Washington bound with a gold Washington funeral medal shell brought $66,000.

The marvelous Pogue collection of United States paper money was assembled over many years and featured a number of notes that are the finest examples graded for their type. Particular emphasis was also placed on highly desirable serial number 1 notes and rare “Star” replacement notes.

Lot 6063 presented an incredible Fr.167a 1863 $100 Legal Tender Note graded Gem Uncirculated 65 EPQ that brought the highest price of the sale realizing $432,000. It is the finest known example of the ever-popular “Spread Eagle” design, which was the nation’s first $100 Legal Tender design type.

Headlining the remarkable offering of serial number 1 notes in the collection was a Fr.1074a 1914 $100 Red Seal Federal Reserve Note from the Philadelphia district graded Choice Uncirculated 64 by PMG. The note, offered in lot 6131, is one of only five serial number 1 examples known for the type and realized $156,000 in Thursday night’s session.

All prices include the buyer’s fee. For complete prices realized for The D. Brent Pogue Collection Part VI and VII, as well as more results from the Stack’s Bowers Galleries March 2020 auction, visit the Auction Archive at the Stack’s Bowers website.

July, 16. 2020
The annual August Ancient and World auction of Stack’s Bowers Galleries features significant collections such as the Glacier Rams Solidi Collection or the Duke of Lansing Collection of British coronation medals, next to an abundance of individual rarities.
error: