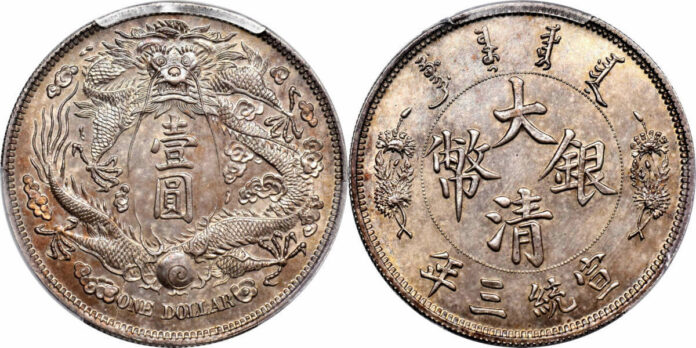 Stack’s Bowers and Ponterio’s inaugural Rarities Night of Chinese Coins proved a resounding success, as 255 lots realized just short of $27,000,000 as one session of the firm’s May 2022 Hong Kong Auction. The highest priced item in the sale, a majestic Year 3 (1911) Pattern “Long Whisker” Dollar graded Specimen-63+ by PCGS, brought an astonishing $3,000,000 million, establishing a new record for the most valuable world coin sold by an American auction firm. This type is one of the most popular issues in Chinese numismatics, and this lot featured one of the most preeminent examples of the type ever offered.

Another ever popular type, a Year 38 (1949) Kweichow “Bamboo” Dollar certified by NGC as EF-40, soared to $480,000. Among the last issues of the Republic period, this type has long captivated collectors, as confirmed by the sale of this example. The largest gold coin from the Republic of China, a 20 Dollar piece from Year 8 (1919) graded MS-62 by PCGS, realized $288,000, far surpassing its presale estimate of $30,000-$50,000. An iconic pattern “Mausoleum” Dollar of Sun Yat-sen, graded MS-63 by NGC, set a new record for the type at $408,000. Those with even a beginner’s knowledge of Chinese coins are familiar with the Year 3 (1914) Yuan Shi-Kai Dollar as a mainstay of the Republic series. An offering in the special proof striking format and graded Proof-65 by PCGS crossed the auction block for an impressive $720,000.

Featured in the Stack’s Bowers and Ponterio Rarities Night Session was the incredible Kairos Collection, which attracted the extremely strong bidding demanded by a cabinet of this lofty stature. A classic rarity, the 1899 Kiangnan 3 Mace 6 Candareens graded PCGS MS-62+ Prooflike, easily exceeded its estimate to reach $1,200,000. A 1914 Silver Dollar Pattern Specimen-67 also passed the million dollar mark, realizing $1,170,000. The finest known Chihli Dollar from year 23, graded MS-66 by PCGS, garnered an incredible $630,000, and an amazing PCGS MS-67 example of the “Dragon in the Clouds” Dollar from Year 3 (1911) sold for $360,000. While comprising only 14 items, the Kairos Collection realized just short of $6,000,000, proving that items of exceptional quality can often reach amazing heights.

View all results of the Hong Kong Rarities Night in the online catalog.

With Rarities Night completed, Stack’s Bowers and Ponterio turns their attention to the rest of the Hong Kong Sale, with five more live sessions and ten Internet sessions. To view lots and bid in the May 2022 Hong Kong Auction or to see complete prices realized, visit Stack’s Bowers website.

These Are the Recipients of the ANA Philanthropy Awards 2022

June, 30. 2022
The American Numismatic Association will recognize numismatic author Q. David Bowers and the Stack family for their successes in the numismatic community with its Philanthropy Award. The awards will be presented at the Chicago World’s Fair of Money in August.
error: