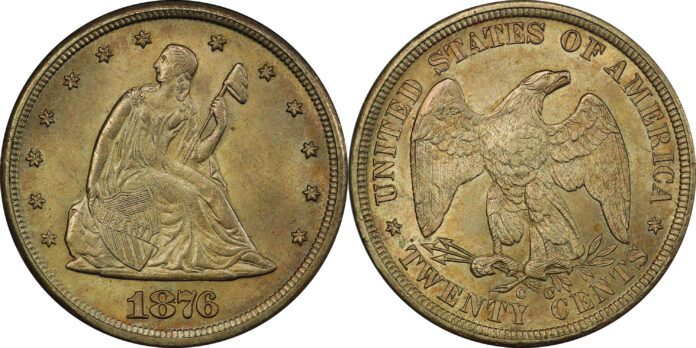 Stack’s Bowers Galleries will sell some American coin rarities at the ANA World’s Fair of Money from 13 to 17 August 2019. Two highlights will appear during the Rarities Night Session on 15 August.

Of all great American coin rarities, the 1894-S dime stands high in the front rank. The appearance of one in the marketplace is always a cause for excitement. Over a long period of years Stack’s Bowers Galleries has offered several, always to excitement and acclaim.

Now comes another – a coin that has been off the market for more than three decades and is fresh to most of the present generation of bidders. This coin is an old friend, so to speak, as Stack’s sold it in January 1953 as a highlight in the F.S. Guggenheimer Collection, after which it passed through other hands to Los Angeles sports magnate Jerry Buss. It was last sold 31 years ago. Now at the forthcoming ANA World’s Fair of Money in August it will cross the block again as part of the E. Horatio Morgan Collection, a private cabinet with many treasures. It has been graded Proof-63 by PCGS, a branch Mint Proof. Of the 24 coins minted (of which 19 were distributed), only nine can be traced today. Although Stack’s Bowers Galleries has handled more than its share of rarities, it has been 12 years since they last offered an 1894-S dime. All eyes will be on the Rarities Night Session, Thursday, August 15, 2019 when this prize is presented for auction.

The fame of the 1894-S dime is well earned, as it has been studied and publicized in numerous books and publications over the years, beginning with an article in the August 25, 1895 San Francisco Call and continuing to the present day. In fact, this issue is so popular that it was ranked number six in 100 Greatest U.S. Coins by Jeff Garrett and Ron Guth.

Although 10 pairs of dies for coining dimes were sent from Philadelphia to the San Francisco Mint, the only production was a run of 24 coins on June 9, 1894, using just one die pair. Coins struck from these were prooflike in appearance, but were not mirror Proofs in the style that would have been made for the numismatic trade. Nevertheless, in later years collectors and dealers often described them as such.

Various theories as to why only 24 were made have been printed, but none have been supported by facts. It is said that Mint employees received some, and that others were placed into circulation at face value. Of the 24 1894-S dimes struck, five were submitted for assay. On June 9th, the day of the coinage, two coins were sent to the director of the Mint in Washington to be assayed, which was done soon afterward. On June 25th two dimes are listed as part of the coins assayed by the San Francisco Mint during the month of June 1894. Another specimen was sent on June 28th to the superintendent of the Philadelphia Mint to be reserved for the annual Assay Commission to review coinage of 1894 early in the next year. No other orders for coinage were forthcoming, so the mintage for that year remained at just two dozen coins and the net distribution was just 19 coins.

As for collectors, in 1894 there were relatively few numismatists who collected coins from the branch mints. Although Augustus G. Heaton’s Mint Marks, published the year before, enjoyed wide sales, the concept did not really catch on until years later. Among the exceptions was John M. Clapp, a Pennsylvania oil man and Washington, DC financier, who in 1893 began ordering coins directly from each mint. On November 2, 1894, he wrote to San Francisco to order one example of each coin. Acting Superintendent Robert Barnett replied on the 9th, stating that “We have no coinage dimes 1894.” During the year several others wrote or sent orders for 1894-S dimes and received the same response. This would seem to indicate that by autumn there were no 1894-S dimes on hand at the mint. If some employees had examples, this was not mentioned. It also gave no indication that coinage was expected.

By the turn of the 20th century, the 1894-S dime had been noted by Heaton in his update to Mint Marks in the March 1900 issue of The Numismatist, and a few collectors were known to have acquired examples, including John M. Clapp who had two. The fame of the dime only grew through mention in print and the publicity that accompanied the offering of specimens at major auctions.

Over the years estimates of the number of 1894-S dimes extant have varied, but as of 2019 there are nine confirmed specimens known.

The 1894-S dime from the E. Horatio Morgan Collection will be presented in the Rarities Night Session of the Stack’s Bowers Galleries Official Auction at the ANA World’s Fair of Money, Thursday, August 15, 2019 at the Donald E. Stephens Convention Center in Rosemont, Illinois.

For a long time the 1876-CC twenty-cent piece has been recognized as one of the most famous and most desired of all American coins, and the offering of an example attracts great attention in the numismatic community. Not only is it a great rarity with fewer than 20 pieces believed to exist, but it also possesses the added romance that accompanies coins from the historic and short-lived Carson City Mint.

Stack’s Bowers Galleries will be offering a PCGS-graded MS-65 1876-CC twenty-cent piece in the Rarities Night session of the firm’s Official Auction at the ANA World’s Fair of Money. This example, a featured highlight of the E. Horatio Morgan Collection, will have been off the market for more than three decades when it crosses the auction block on the evening of August 15, 2019, in Rosemont, Illinois. It last appeared as lot 1405 in The 400 Sale held by Stack’s in January 1988, and will be the first Gem 1876-CC twenty-cent piece seen on the market since Stack’s Bowers Galleries’ sale of the F.C.C. Boyd specimen in January 2013.

History of the 1876-CC Twenty-Cent Piece

Records reveal that 10,000 1876-CC twenty-cent pieces were struck. However, by the time they were produced by the Carson City Mint, the denomination had effectively been rendered obsolete, and apparently nearly all were melted. The destruction of these coins is probably the subject of the following request written by Mint Director Henry Richard Linderman on May 19, 1877, addressed to James Crawford, superintendent of the Carson City Mint: “You are hereby authorized and directed to melt all 20-cent pieces you have on hand, and you will debit ‘Silver Profit Fund’ with any loss thereon.”

In 1876 at the Carson City Mint selected samples of all coins were set aside for examination by the annual Assay Commission, which met in Philadelphia on Wednesday, February 14, 1877. Presumably, only a few 1876-CC twenty-cent pieces were shipped east for the Commission, a group which probably constituted most of the supply available to numismatists. It seems likely that a few were paid out in Nevada in 1876-1877, accounting for a handful of worn and impaired pieces known today.

Perhaps the first 1876-CC twenty-cent piece to attract notice in a catalog was in the R. Coulton Davis Collection sale by New York Coin & Stamp Company, January 20-24, 1890. However, the rarity and desirability of the 1876-CC 20-cent piece was first showcased to a wide audience in A.G. Heaton’s 1893 A Treatise on the Coinage of United States Branch Mints. Prior to that time, numismatists had been concerned primarily with dates, and whether a coin had a mintmark or not made little difference. In his text Heaton mentioned the 1876-CC twenty-cent piece in two places, noting in the preface that it was “excessively rare in any condition,” and in the main text the following: “The pieces of 1876-CC have become very rare, as we have mentioned in our preface, from the negligence of Western collectors, or the indifference involved in mintmark rarities.” In due course other examples of the rare 1876-CC twenty-cent piece crossed the auction block and, as interest in mintmarks intensified, this rare issue only became more highly prized. The 1876-CC twenty-cent piece has been a mark of distinction if a major cabinet includes an example.

As noted, today the population of extant 1876-CC twenty-cent pieces is believed to be fewer than 20 pieces. The coin to be offered by Stack’s Bowers Galleries in their August 2019 ANA Auction is among the finest graded at PCGS, tied with two other grading events at MS-65, and with only two graded finer at MS-66, not necessarily representing that many different coins.

For more information on the auction sale go to the Stack’s Bowers Galleries website.

If you want to read a short article on the Carson City mint where both highlighted coins were produced, you can find it in our archive.

November, 26. 2020
Stack’s Bowers Galleries offered in their past November Auctions some highly important collections of American Coins: the Larry Ness Collection of Indian Peace Medals, the second part of the E Pluribus Unum Collection, and the first part of the Larry H. Miller Collection.
error: