July 19, 2012 – The Governor of the Central Bank of Samoa, Maiava Atalina Ainuu-Enari, has announced the release of two commemorative collectible coins and a limited edition $50 Tala banknote for circulation to mark Samoa’s 50th Independence Day.

“On 1 June 2012, we celebrate the 50th anniversary of Samoa’s independence. CBS has released two special collectible coins to commemorate and celebrate this historic and joyous occasion with Samoans, overseas Samoan communities and friends all over the world,” said Governor Ainuu-Enari.

The obverse of both the commemorative coins features Samoa’s Head of State, HighnessTui AtuaTupuaTamasese Efi. The reverse coin design is the Official Independence Logo.

“The 1 Tala silver proof coin will satisfy the most discerning collector while the affordable 1 Tala uncirculated coin can be enjoyed by many thousands of Samoans,” said Governor Ainuu-Enari. 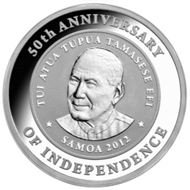 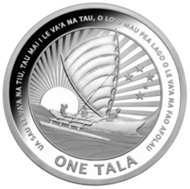 The 1 Tala silver proof coin is struck from 99.9% silver and has a limited mintage of 1500. This coin is presented in a hard case enclosed in a stunning outer box. Each coin is accompanied by a certificate of authenticity from the Central Bank of Samoa and Royal Australian Mint. Background information on Samoa’s independence has been included to ensure that this historic story may be shared for years to come. 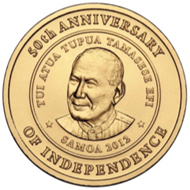 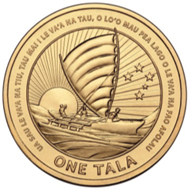 The 1 Tala uncirculated coin is a combination of aluminium, zinc and bronze. This coin is presented in a beautifully designed card and also includes educational information on Samoa’s independence.

Further information on these coins offer the website of the Central Bank of Samoa.