Exquisite and rare medals of the popes

Solidus Auction 33 on the auction platform AUEX offers 346 lots with papal medals and some thematically related pieces. Among these are top pieces of the Baroque and later eras executed in a superior style and made of gold and silver as well as pieces made of base metal with favorable and affordable prices, that are also attractive and fascinating. The latter are ideal for beginners engaging in this exciting and worthwile field of collecting.
Until September 15 you can make prebids for the papal medals on the platform Auex. The live auction starts on the same day at 17:00 CEST.

The auction is chronologically organized according to the portraits of the popes depicted on the medals. It consequently begins with two bronze medals on Peter, continued by copies of his successors on Saint Peter’s Chair from the first centuries of our era.
These medals have been produced since the Baroque as single specimens or as components of entire medal suites. They depict historical papal figures as ideal images of ecclesiastical dignitaries, without their faces ever being known from contemporary representations. However, these products are also interesting sources for the historical views and mentality of their manufacturers and clients.
On the other hand, since the Renaissance and Baroque, true portraits of currently ruling church rulers of great expressiveness, some of which were designed by renowned artists, have been created in accordance with the understanding of early modern art. These include the Hamerani goldsmith dynasty, a family of artists with Bavarian roots of their progenitor Johann Hameran. Among the numerous pieces of impressive quality in the auction produced by this family of artists are three gold medals by Giovanni Martino Hamerani from the years 1679 to 1690 (lots 147, 150 and 155) and rare copies by Ottone Hamerani (lots 181, 183, 185, 186). However, there are also other contemporary die cutters that round off the picture of the Vatican mint. 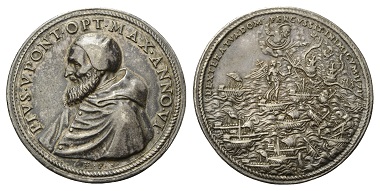 In addition to the possibility of creating a gallery of the successors of Saint Peter, the backsides with the variety of possible topics make papal medals a particularly exciting object of collecting and research. They refer to historical events of world-historical importance, such as the Battle of Lepanto in 1571 (lot 90), to liturgical festivals of particular splendour (e.g. lots 125, 132, 146), or to the building activities of the popes, which can considerably enrich our knowledge about the historical townscape of Rome or the buildings in the lands of the Papal state as independent sources (e.g. lots 49, 68, 117). Other events, such as the recovery of the Antoninus Pius Column in 1703, are also anecdotally preserved (lot 167). Last but not least, theological programs also receive symbolic appreciation (lot 245). 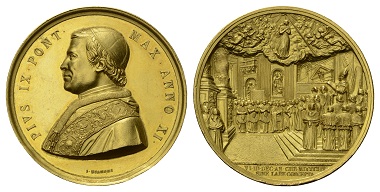 Among the papal medals of the 19th and 20th centuries there are many high-quality, rare and partly very rare medals in precious metals (e.g. in gold lots 208, 214, 245, 282, 293 and others), including an extremely rare gold medal from 1856 with a depiction of the reading of the dogma of the Immaculate Conception in excellent condition (lot 245). A recent anecdote that made waves in the media is represented in two copies in silver and bronze (lots 318 and 319). In 2013, the Vatican issued medals with the incorrect spelling “LESUS” instead of “JESUS”. The sale, which had just started, was quickly stopped and all tangible specimens were melted down immediately. Only a few pieces were sold to a few buyers. 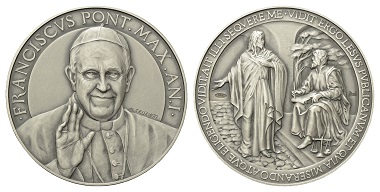 Among the modern pieces an impressive avers die for a medal of Pope Pius XII. from 1950 deserves special mention (lot 304).
Finally there are some medals of cardinals and a few orders, badges and insignia.

You can send your maximum offers before the auction – or participate in the live auction, that allows you to bid on the lots in real time and influence the auction process directly, similar to a floor auction. The Live Auction starts on Saturday, September 15th 2018, at 17:00 CEST. Please register till Friday, September 14th 2018, 13:00 CEST.

You can browse through the online auction catalogue on the AUEX platform or on Sixbid.