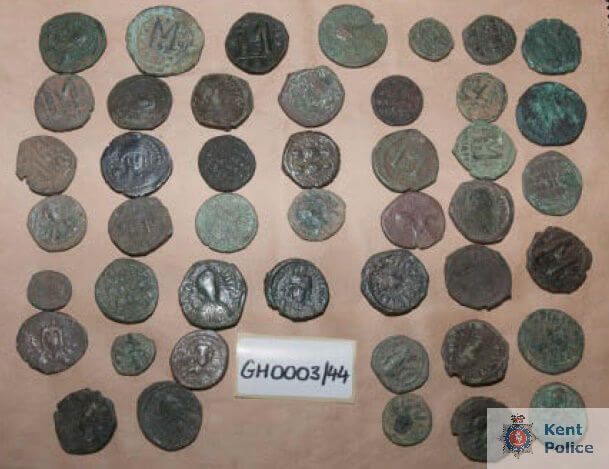 The 27 October 2020 did not start well for truck driver Dimitar D. When the 41-year-old Bulgarian from the small town of Pazardzhik wants to enter the United Kingdom at 5:30 a.m. with his truck via Dover, he is checked by British customs authorities. Besides the actual cargo – trousers – two well-hidden black parcels were seized, containing ancient artefacts and numerous coins. Of course, the driver did not know anything about that; someone must have hidden them without telling him, he claims when arrested. During investigations carried out by the Kent police with the assistance of art crime experts and the Bulgarian authorities, further pieces of information were found on the driver’s mobile phone.

A Courier for Organised Crime

The police quickly concluded from the data that Dimitar D. was a courier for organised crime in Bulgaria. He was supposed to deliver the antiquities to intermediaries in London, who would then sell the objects to London antiques collectors.

Detective Constable Max Gregory of the Kent police, the officer in charge of the investigation, commented: “The illegal excavation of antiques is an ongoing issue in Bulgaria, depriving its citizens of an important part of its cultural heritage. The criminals responsible think nothing of the harm it causes when they smuggle their ill-gotten gains into countries like the UK, often using the proceeds from their smuggling to fund other international criminal activities.”

The Kent police estimates the value of the smuggled goods to be £76.110 (currently almost 90,000 euros). However: if the photos taken by the police are somewhat representative, this estimate should be questioned.

Let’s take a closer look at the photos taken by the police. Assuming that the quality of the depicted objects is representative and that there weren’t thousands of objects in the two black parcels, the mentioned value seems to be way too high. We asked experts from the trade for an appraisal. Our hypothesis was confirmed: the shown pieces are – if I may – junk.

There are 45 Byzantine coins in poor condition which, if a dealer would buy them at all, would at best be sold together as a multiple lot at auction. In that case, they would probably sell for about 200 euros, for 500 if you get really lucky.

In addition, there is a Roman buckle of late antiquity – a mass-produced item, which is usually also sold together with other pieces in a multiple lot – and two statuettes of a horse and its rider, which are usually sold as the “Thracian horseman” but in this case both figures probably do not even belong together. According to the experts, both objects are worth much less than 100 euros.

Even if we assume the coins to sell for as much as 500 euros and the antiquities for 100 euros each, we are still far away from a total of 1,000 euros. Thus, there would have to be some other treasures in the box to get anyway near £76,110.

Why did we actually look into this? The value of the goods makes the whole case a bit absurd, both the proud press releases of the British police and the horror stories about smugglers funding organised crime. But don’t get me wrong: of course, it’s right and important to cut off the supply of the criminal art market and to cooperate internationally to take decisive action against organised crime of this kind.

And what about Dimitar D.? He finally pleaded guilty in court and has to spend two years in prison for the smuggled trinkets. That’s certainly justified for the reasons mentioned above. And yet, one cannot help but feel sorry for him because – as is often the case – only the poor devil who drove the truck got caught. The people behind it seem to be out of reach – for now.

In our partner publication Bookophile, a few months ago we covered a case in which valuable antiquarian books were stolen in a spectacular way in the UK and later seized in Romania.

It’s sad to see that so many news can be found in our “Crime” section.

July, 23. 2020
Acting on a tip from the Anti-Counterfeiting Educational Foundation, US law enforcement agents are investigating the attempted sale of $400,000 of counterfeit coins including a fake example of the historic 1879 Coiled Hair gold $4 “Stella” in a bogus NGC holder.
error: