November 15, 2012 – The European Central Bank (ECB) and the national central banks (NCBs) of the Eurosystem are to introduce a second series of euro banknotes. Called the “Europa” series, it will include a portrait of Europa – a figure from Greek mythology and the origin of the name of our continent – in the watermark and the hologram. The new banknotes will be introduced gradually over several years, starting with the 5 Euro banknote in May 2013.

The Europa series has benefited from advances in banknote technology since the first series was introduced over ten years ago. Its security features have been enhanced, which will help to make the banknotes even more secure. Three new features – the portrait watermark, portrait hologram and emerald number – have been unveiled on November 8, 2012.

Emerald number: When you tilt the banknote, the shiny number displays an effect of the light that moves up and down. The number also changes colour from emerald green to deep blue. © European Central Bank.

The new banknotes are an evolution. Like the first series, they will have the “ages and styles” design and the same dominant colours, but they have been modified to accommodate the enhanced security features. They will be easy to distinguish from the first series. The Europa series will have the same denominations as its predecessor, i.e. 5 Euro, 10 Euro, 20 Euro, 50 Euro, 100 Euro, 200 Euro and 500 Euro, and they will be introduced in ascending order. Thus, the new 10 Euro banknote will follow the 5 Euro. 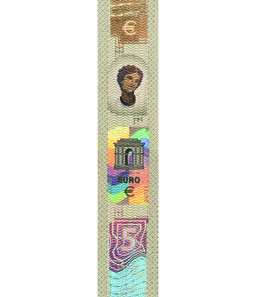 Portrait hologram: When you tilt the banknote, the silvery stripe reveals a portrait of Europa, the same as in the watermark. The stripe also shows a window and the value of the banknote. © European Central Bank.

The first series will initially circulate alongside the new banknotes, but will gradually be withdrawn and eventually cease to be legal tender. The date when this occurs will be announced well in advance. However, the banknotes of the first series will retain their value indefinitely and can be exchanged at the Eurosystem NCBs at any time. 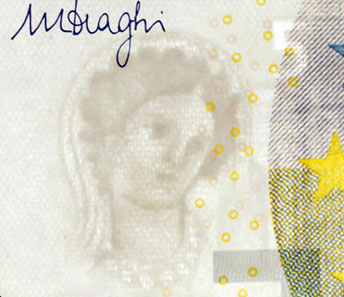 Portrait watermark: When you look at the banknote against the light, a faint image becomes visible and shows a portrait of Europa, the value of the banknote and a window. © European Central Bank.

The Europa series 5 Euro banknote will be unveiled in full on 10 January 2013 and credit institutions will start to issue the new notes over the counter or via cash dispensers in May 2013.
In order to raise public awareness of the Europa series, the ECB and the NCBs of the Eurosystem will be conducting a multi-channel information campaign across the euro area in 2013. Preparations are currently under way, supported by two agencies chosen by the ECB following a public tender.

In this video clip the new banknotes are presented and explained.