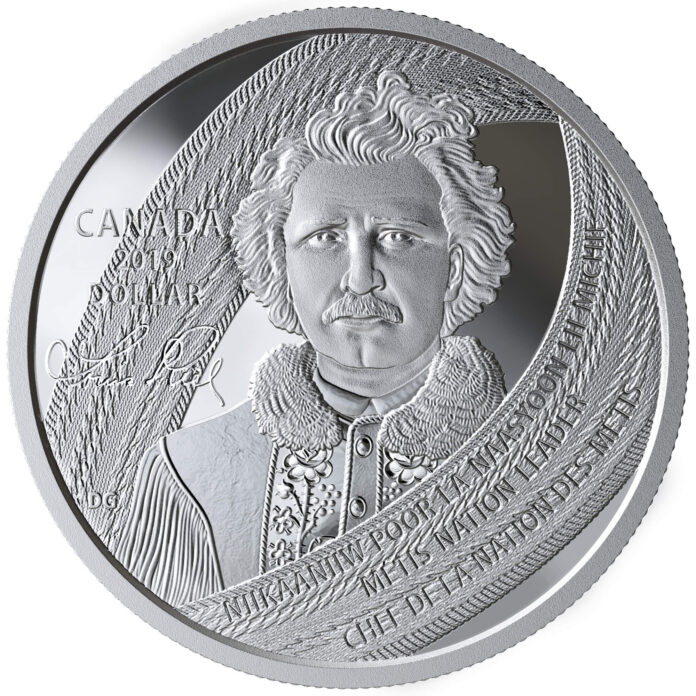 The Royal Canadian Mint has unveiled a fine silver Special Edition Proof Dollar marking the 175th anniversary of the birth of Louis Riel. In addition to featuring an evocative portrait of the founder of Manitoba, this is the first coin produced by the Mint to be engraved with Michif, the official language of the Métis Nation. The coin was officially launched at the Manitoba Metis Federation’s annual celebration of Louis Riel’s birth.

Born 175 years ago in Saint-Boniface, in the former territory of Rupert’s Land, Riel was central to the effort to protect Métis rights when the land that would become the province of Manitoba was transferred to the Dominion of Canada. He is known as the founder of Manitoba, after negotiating the terms under which the newly created province entered Confederation in 1870.

“The Mint plays an important role in crafting coins that tell stories of the people who have shaped the course of Canadian history,” said Marie Lemay, President and CEO of the Royal Canadian Mint. “We are proud that our newest collector coin recognizes that Louis Riel’s leadership and tireless advocacy for the Métis Nation made an undeniable contribution to Manitoba and Canada.”

“Louis Riel is both an iconic figure and an aspirational role model not only for the Métis Nation, but for all Canadians. He protected Métis self-determination, stood strong for language, religious, and Indigenous rights, and resisted injustice,” said David Chartrand, President of the Manitoba Metis Federation. “With his Provisional Government leadership, the Métis Nation became Canada’s Negotiating Partner in Confederation and the Founder of Manitoba. We are proud that the Royal Canadian Mint has worked closely with us to commemorate President Riel’s 175th birthday. We welcome them, and indeed all Canadians, in our very special celebration.”

Designed by Métis artist David Garneau, the reverse of the 2019 Special Edition Proof Dollar features a portrait of Riel wearing a fur-trimmed buckskin jacket adorned with traditional floral beadwork. The Coventry sash encircling his portrait forms one looped half of the emblem of the Métis Nation: an infinity sign that represents the unification of two cultures and the immortality of the Métis Nation.

“The Royal Canadian Mint’s coin pays fitting tribute to the eternal leader of the Métis Nation,” said Clément Chartier, President of the Métis National Council. “Louis Riel’s vision and sacrifice not only shaped the struggle of the Métis people to secure their place within the Canadian Federation but also gave birth to western Canada itself.”

Did you know that 2019 is the International Year of Indigenous Languages? Visit the website of the United Nations for more information.

If you want to know which Indigenous languages are spoken in Canada besides Michif, have a look at the Canadian Language Museum.

The Royal Canadian Mint Donates $100,000 to Breakfast Club of Canada

July, 30. 2020
Thanks to those who are buying recognition medals, the Royal Canadian Mint is making an initial donation of $100,000 to Breakfast Club of Canada in support of children and families who are facing food insecurity due to the repercussions of COVID-19.
error: