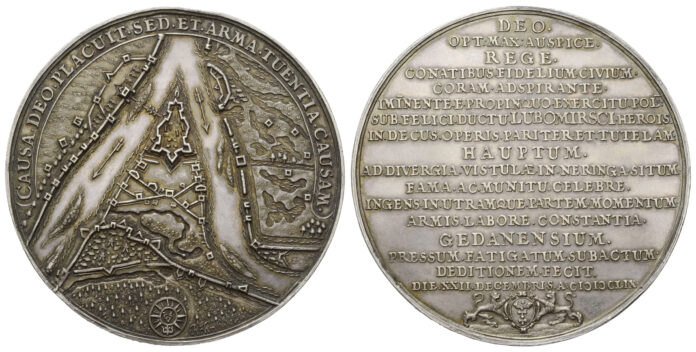 Precious Treasures From Saxony and Poland at Solidus

The current Premium Auction of Solidus presents again an astonishing series of Saxon coins and medals with a focus on talers of the kingdom between 1806 – 1871, mostly in superb condition. Furthermore a smaller series of brilliant coins from the Duchy of Warsaw as well as gorgeous medals of the city of Danzig are on offer. In both cases Saxon sovereigns play a role.

The auction will be held live on the platform AUEX on Thursday, 26 March 2020, starting at 17:00 CET. Pre-bids can already be submitted.

Among the Saxon coins before the Napoleonic era prevail the electors Johann Georg I. And II., often in excellent condition. Rare issues for the “Oberlausitz” and the margraviate Meißen as well as pieces commemorating the reformation and “Wechseltalers”  are noteworthy. A taler depicting Saint George and the dragon from 1671 is especially appealing (Lot 30).

The issues of the kingdom of Saxony from 1806 till 1871 are represented by a handsome and big series of Talers and Doppeltalers, as well as some fractions and small currency. Many of these items are choice pieces of top quality. A huge range of years and variants offers the rare occasion for specialized collectors to complete their treasures. Equally from this period many rare and beautifully preserved medals are on offer, e. g. items commemorating jubilees of the „Bergakademie Freiberg“ or the rare medal celebrating the rescue of casualties in the quarry Schmilka (Lot 205). The auction continues with some selected Saxon coins and medals from the period of the German Empire from 1871 till 1918.

A small series of coins issued for the Duchy of Warsaw, that was closely related to the Saxon sovereign is following. An extremely rare coin of necessity, minted during the siege of the fortress Zamosc in 1813 is a highlight in an over average state of preservation, like most of the other pieces of this series.

The auction concludes with magnificent medals of the city of Gdansk. Some of them have been produced when a Saxon sovereign was Polish king in personal union. One of the earlier pieces commemorates the recapture of the fortress Haupt in the year 1659 during the reign of king Johann II. Kasimir. It is characterized by an interesting perspective from bird eye’s view on the fortress (lot 284). For those, who cannot afford the minted original, an ancient high quality cast of the piece is also available. Another bird eye’s view of the city plan of Gdansk is offered by another medal, that has been issued under the rule of Friedrich August III. (lot 287).

Other images celebrate jubilees of the dissociation of Gdansk from the Teutonic Order or the Gymnasium of Gdansk.

You can place your maximum bids before the auction – or during the live auction, during which you can bid on the lots in real time and actively influence the auction process, similar to a floor auction. The live auction starts on Thursday, 26 March 2020, at 17.00 CET.

You can browse through the complete auction catalogue on AUEX or on Sixbid.

Here you can reach the website of Solidus Numismatik.

September, 9. 2021
In Solidus’ Literature Auction 7, 1,531 lots will be offered in various languages. In addition to numerous bibliophile rarities, there are important numismatic standard works as well as rare auction catalogs of important and sought-after collections.
error: