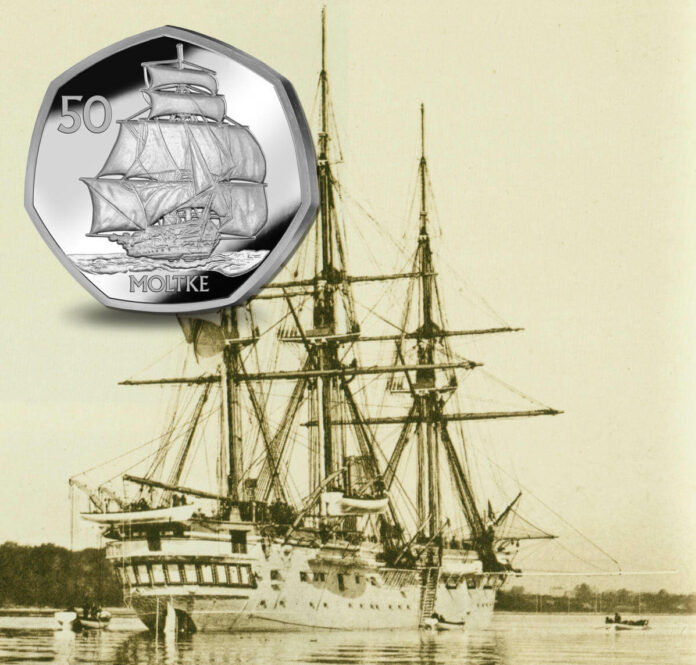 The Pobjoy Mint series of 50 pence coins featuring historical ships is back by popular demand. The new 2022 coin in the series is released on behalf of the Government of South Georgia and the South Sandwich Islands and features the steam-powered ship Moltke launched in 1877 and built for the German Imperial Navy.

Moltke was a vessel of the Bismarck class and it was originally designed to serve as a fleet scout and to go on extended tours of Germany’s colonial empire. But, it wasn’t until 1882, that it was deployed to carry the   first German Expedition for the International Polar Year to South Georgia.

This expedition, led by Karl Schrader, aimed to spend a year on South Georgia Island making scientific observations on a range of phenomena including geology, zoology and disturbances in the geomagnetic field. On August 21st after navigating heavy seas and icebergs they found a suitable landing site at what is now known as Moltke Harbour near Royal Bay.

German scientists spent 13 months in South Georgia as part of the International Polar Year between 1882- 1883 where they setup the island’s first scientific research station. The expedition was supplied with special equipment to enable the crew to obverse the Transit of Venus, which occurred on 6th December 1882. This enabled the distance between the Earth and the Sun to be measured while Venus passed between them. They were also responsible for setting up the first telegraph system and for taking the first photographs of the island. Foundations of their 8 buildings can still be discerned at Koppen Point.

The three masted steam corvette Moltke, returned to Germany in 1885 where she became a training ship for naval cadets and later apprentice seamen. The ship served in this capacity from 1885 to 1908, during which time her activity consisted primarily of fleet training exercises and overseas training cruises. She was stricken from the naval register in October 1910 and sold for scraps in July 1920.

Moltke is an important part of the heritage of South Georgia & the South Sandwich Islands and represents a key moment in the island’s history.

The obverse of the coin features an effigy of Her Majesty Queen Elizabeth II produced exclusively by Pobjoy  Mint.

For additional information on the coin, visit the Pobjoy website.

Check out more Pobjoy coins in our Cosmos of Collectible archive.

If you want to be informed about all latest coin issues, subscribe to the Cosmos of Collectibles newsletter.

January, 27. 2022
Pobjoy mint commemorates the 60th anniversary of the British Antarctic Territory with a £2 coin.
error: