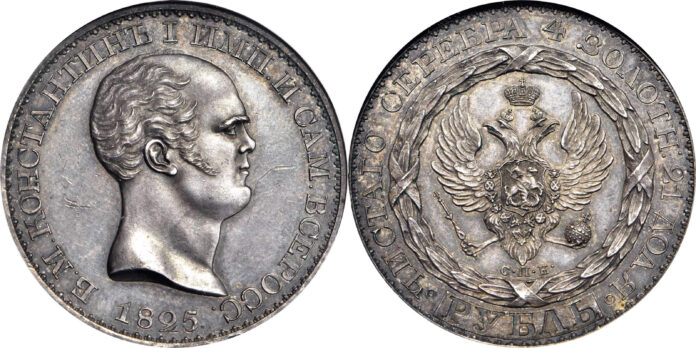 The rare coin market remains incredibly robust, with Chinese numismatics among the clear trend-setters. Within this environment of intense interest, auction house Stack’s Bowers and Ponterio has assembled their largest – and sure-to-be their most valuable – Hong Kong auction to date, offering over 5,000 lots of coins, medals, tokens, and currency, with higher end estimates surpassing $16.5 million. The auctions will be held from 5th to 11th April 2021.

At the forefront of this magnum opus of Asian and related numismatics is the Pinnacle Collection – aptly named for its astounding offerings. Presenting some of the rarest coins in the modern Japanese series, the collection features an exceedingly important Pattern set from year 3 of the Meiji era (1870). Estimated as high as $1.5 million, it is truly a national treasure and the only set held privately (the other being in a museum). Also notable is an outstanding array of early Obans, as well as Japan’s rarest modern-era circulating coin – a year 10 (1877) 20 Yen with a minuscule mintage of 29 pieces that bears an estimate of $300,000 to $600,000. Among Chinese rarities are “Mukden Tiger” and “Long Whisker” pattern dollars, each with a high-end estimate of $250,000, and numerous other patterns that will undoubtedly achieve six figures. The Pinnacle Collection also presents monumental Russian rarities, chief among which is a fabled pattern Ruble from would-be emperor, Constantine I. Minted during the brief pseudo-interregnum in late 1825, it is one of just eight known, and among just three with a plain edge. Its last appearance at auction in 2004 saw a record hammer of $525,000, foreshadowing the current upward potential of this famous crown.

Moving on from the Pinnacle Collection, highly sought-after rarities are found throughout the catalog and include the finest certified “Flying Dragon” Dollar and a lovely Anhwei Dollar from Year 24 of Guang Xu (1898), each carrying estimates of $100,000 to $150,000. Minting refinements from the west are observed in pieces such as an immaculate Heaton mint specimen 50 Cents from Kwangtung and a tremendous “matte proof” pattern Dollar of Yuan Shih-kai from the skilled hand of Luigi Giorgi. Among modern rarities is a never-before-seen and presumed to be unique grouping of 19 brass patterns that emanate from 1981 “Bronze Age” series. Important issues from around the region, like a 1906 10 Won from Korea and a Mint State silver 4 Baht from Thailand celebrating the 60th birthday of Rama IV, round out the tremendous offering.

In the currency portion of the April 2021 Hong Kong Auction, the increasingly varied interests of the audience has led Stack’s Bowers and Ponterio to include a wider array of banknotes from around the entire world. Of note is a full set of issues from Panama, including the second finest 20 Balboas and a near-Gem 10 Balboas. From Pakistan, there is a 100 Rupees “Haj Pilgrim” specimen, graded PMG AU-55, while notes from Canada offer an extremely scarce serial number 1 Merchants Bank of Canada 5 Dollar note and a grouping of fancy solid serial-numbered Bank of Canada issues.

The highlight of the banknote auction, however, is the coveted “Black Dragon” or “Ooi-Long” 1 Yuan. The holy grail of early provincial currency, this exceptional example has been privately held for a number of years and is making its first major auction appearance since realizing $125,000 over a decade ago. The design features two black dragons facing one another, flanking a detailed vignette of a Kwangsi Dollar. The reverse shows a Kwangsi Bank handstamp at left, along with an inscription within the orange border that loosely translates to “no discount given” and “redeemable for silver at any branch.” This is undoubtedly a Chinese banknote collector’s dream, and a specimen that belongs in the most advanced of notaphilic cabinets.

Among Russia’s most famous coins, the fabled pattern ruble of Constantine possesses a background as fascinating as its rarity and value. Issued for the would-be emperor, Constantine Pavlovich, the fabled pattern ruble is the only coin produced for this reign that never really happened. Constantine was the middle son of Emperor Paul I, and was seemingly destined for a life as the “spare” to his elder brother, the “heir.” Following Paul’s assassination, Alexander (the elder brother), Constantine, and Nicholas (the younger brother), were all weary of the crown’s burden. When Alexander died rather unexpectedly – and, more importantly, without a legitimate heir – the duty fell to Constantine. Mint officials, mindful that coins reinforce the divine right of a ruler to the masses, immediately began producing a prototype so that official coinage could continue without interruption. Constantine, however, had other plans; he decided, after just a few weeks, that he wanted no part of his tsarist duty, abdicating the throne in favor of Nicholas. In a flash, a would-be reign was brought to an end before it officially started. But what of the prototypes created by the mint officials? During this period of uncertainty, some eight examples were produced – five with edge lettering and three without. Rather than entering the melting pot, they were fortuitously preserved, with the five lettered edge specimens held for safe keeping within the Ministry of Finance and the three plain edge examples seemingly held by the officials present during their striking.

As the decades passed, the lettered edge rubles were obtained and dispersed by then-tsar Alexander II. Of the five, three are now held in museums (the Hermitage, the state Historical Museum in Moscow, and the Smithsonian). The remaining two have sold publicly and are presumably still in private collections. One last appeared in Bowers and Merena’s 1994 Baltimore auction, while the other has not officially been seen since 1898. Turning to the plain edge examples, all three have had a presence in the marketplace, but only the specimen in question – this impressive piece from the Pinnacle Collection – has been seen since 1981. It last crossed the auction block in January 2004, and since then the rare coin market has enjoyed tremendous growth and prosperity, especially during the past year. When the gavel last fell for this monumental pattern issue, a record was established, making it the most valuable non-U.S. coin to sell at that time. Nearly two decades later, the hammer price of $525,000 has been surpassed by other iconic ancient and world coins, a number of which are other Russian rarities. Given the current robust rare coin market and this pattern ruble’s status within the Russian series (perhaps being the most famous of them all!), a seven figure hammer is easily foreseen, especially when observing the $2 million-plus realizations brought by a Nicholas I pattern 1/4 ruble or polupoltunnik (in 2013) and a Catherine II “the Great” gold 20 rubles (in 2008), along with the nearly $4 million hammer of an Ivan IV pattern ruble (in 2012). For the connoisseur of Russian numismatics, rare coins in general, or even exceptional works of art, the present pattern ruble is a prime candidate to perform incredibly well at the Stack’s Bowers & Ponterio Hong Kong auction in April.

All lots of the auction can be viewed online on the Stack’s Bowers website.

For more information on the Stack’s Bowers and Ponterio April 2021 Hong Kong Auction or the Pinnacle Collection, visit the firm’s website, call 800-458-4646, or email.