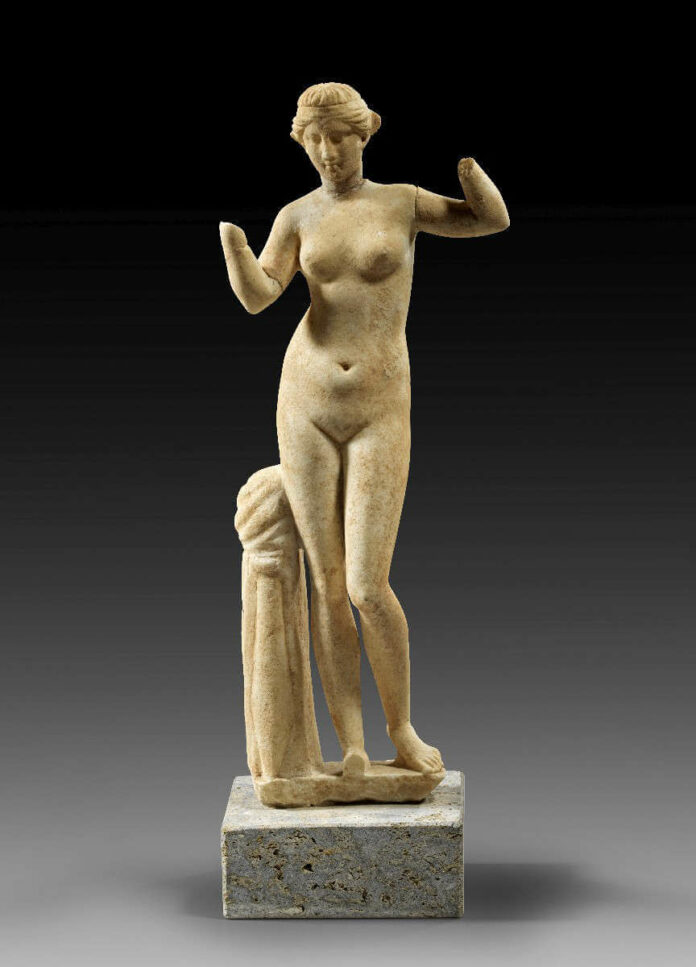 Accompanying auction 287 taking place on 12 July 2022 at Gorny & Mosch in Munich, a splendid print catalogue has been published. More than 930 lots will be on sale, including a fine selection of high-quality glass objects. Both in the section Ancient Near East as well as Pre-Columbian America, more than 80 pieces are on offer: particularly noteworthy are an impressive collection of bowls and weapons from the Ancient Near East as well as selected fabrics of various types from Pre-Columbian America. Once again, the selection of Bronze sculptures is remarkable too. Moreover, numerous fine marble items will come under the hammer at this auction.

Apulian Gnathia Chous of the Konnakis Group. 350 – 330 B.C. Ht. 16.9cm, ø body 11.8cm, ø base 9.1cm. Gazed ware with etchings and paint in white, yellow, brown and red. On the front a rectangular image field framed by egg-and-dart on the top and the bottom as well as laurel branches to the left and right. Below an ivy-tendril, a fable depicted in the image field: on the top, two apes are betting on two roosters, which are ready to fight and depicted below. Beautiful art and interesting iconography!

Provenance: from the M. B. Collection, Hesse, since before 1970.

Bathing Aphrodite. Late Hellenistic – Early Imperial Period, 1st century B.C. – 1st century A.D. Ht. 36cm. White, fine crystalline marble. Figurine of a naked, slim woman on a rectangular plinth. Her arms are raised and bend to loosen a hair ribbon whose remains can still be seen on the side of the head. To the side a tree stump, which is almost completely covered by the discarded garment.

Circular disk with Gorgoneion. Roman Imperial Period, 1st century A.D. ø 10,5cm. One-side bronze disk with a frontal Gorgoneion. The head of Gorgo Medusa with contracted bows surrounded by snake-like hair and equipped with horns of a bull and a ram is lying on the scaled skin of the aegis. Eyes inlaid in silver. Excellent style!

Provenance: purchased in Munich in 2015.

Silvered bronze bowl with decoration. Achaemenid, 6th – 5th century B.C. ø 17cm. Repoussage. Bronze on the outside, silver-plated on the inside. Decoration punched from the outside, engraved on the inside. Circular, flat bowl with a small, bulging edge. In the middle a rosette, followed by a ring without decoration, another ring with four trifoliate palmettes; in the outer ring two pairs of  ibexes facing each other, in between four rosettes. The rings are separated by concentric circles. With comment of Ernst Langlotz and letter of Anton Moortgat!

Female Mezcala idol. Ca. 300 – 100 BC. Ht. 21.5cm. Dark grey stone with lighter inclusions. Standing figure with short legs separated by a wide furrow. Two diagonal furrows separate the legs from the lower body. The angular, rectangular head with the schematic face is set off from the torse by two deep, lateral indentations. Rare!

Provenance: ex A.H. Collection, purchased from a Munich collection before 1971.

Extraordinary and rare bronze figure of Buddha Maravijaya. Khmer, Lopburi, about 13th century A.D. Ht. 23cm. Full cast. Sitting in dhyanasana, holding his hands in bhumisparsa mudra: the fingertips of his right hand touch the ground, calling the goddess of the Earth to be witness of his deeds and of his right to attain the enlightenment. His left hand rests on his laps with a tiny lotus bud. He is wearing a long sanghati robe, which is leaving his left shoulder bare. His head is turned slightly to the right, the face has the serene, peaceful expression of the nirvana. Hair with tiny curls and a pointed Ushnisha.

For more information about the auction house, visit the Gorny & Mosch website.