August 30, 2018 – The newly established Mel Wacks Judaica Art Medal Award was presented at the 2018 XXXV FIDEM Art Medal Congress awards banquet in Ottawa on June 3rd, 2018. It was awarded to Otakar Dusek, from the Czech Republic, for his Todesmarsch (Death March) medal “that breaks down barriers for medallic art that have been in place since the Renaissance. It shows how a relatively small medal can have significance far beyond its size,” said Wacks in his presentation. The medal fit into the theme of the FIDEM conference: “Women and the Art Medal”.

Here is a description of this project in Otakar’s words:
“A concentration camp for women was located near the German municipality of Helmbrechts. On April 13, 1945, it was hastily evacuated, as US troops were approaching. Almost 1,200 pitiful women prisoners from this camp were thus force-marched towards Germany-occupied Czechoslovakia.

After 5 days and 90 kilometers, the column reached the women‘s concentration camp at Zwodau. This part of the march had just one goal – the elimination of all the prisoners along the way. Sadly, the story of these women is almost unknown in my country today. I too came across it by accident. And it was why I felt it would be appropriate to commemorate the event by making a medal.

It took more than a year of archival research to collect enough documents and period maps to be able to reconstruct, fairly accurately, the route of the march.  On April 13, 2015, exactly 70 years after the death march, I set out from Helmbrechts, the place where the concentration camp had been located in 1945. I was wearing boots with special soles into which I was inserting memorial silver medals, of which a symbolical number of seventy had been produced. 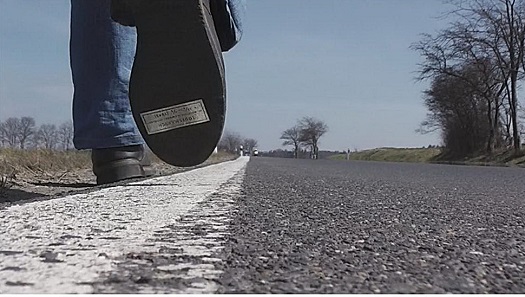 Otakar Dusek followed the path of the Death March wearing a total of 70 tribute medals on the sole of his shoe.

The medals were designed so that their shape reminds of the labels on boxes of Mauser ammunition used by the SS-guards to execute the exhausted woman prisoners. The text engraved on the obverse side of the medal reads “Todesmarsch – Death March”, followed by the names of the towns the column passed through; Helmbrechts – Zwodau – Volary. The reverse side of the medal shows the manufacturing date for each medal.

As I was walking with the medals inserted in the soles of my boots, the silver the medals had been made of got damaged. A part of the march route has thus been indelibly imprinted in each medal. The damage to the metal also gives you a clear idea of the immense suffering the female prisoners were exposed to, since most of them were marching barefooted or in primitive wooden clogs.

The video documenting my 3 week march has been recorded on a memory stick which accompanies each medal. The medal is placed loosely inside a cloth bag, that has been made of the same woven material used to make prisoners’ uniforms worn in the Ravensbrück concentration camp, which also supplied uniforms for the Helmbrechts camp. The memory stick is inserted inside a seam in the fabric; this symbolizes the fact that the prisoners hid their valuables in the seams of their clothes, so they were not confiscated during inspections performed by guards. To this day, we cannot say exactly how many victims this death march claimed. Some of the dead bodies have never been found.”

For further information about Project Todesmarch, you can contact Otakar Dusek.

Otakar Dusek has also released a teaser for the documentary he produced as part of this project.