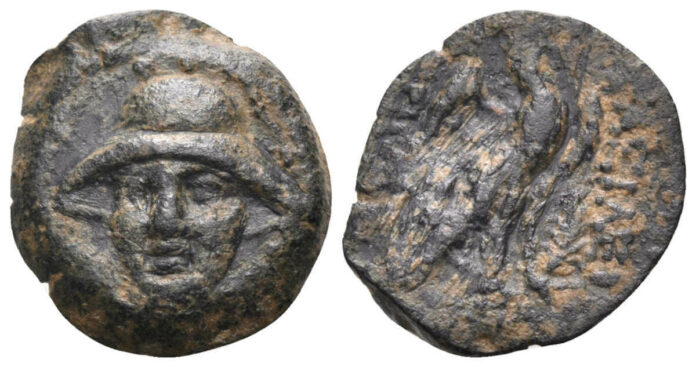 Nomos’ latest web auction, Obolos 22, which closes on 6th March 2022, is now up and running, or at least strolling, and it is about time we said something about it!

This sale illustrates the famous saying of Forrest Gump’s that “you never know what you’re going to get”: while he was talking about chocolates, the contents of this sale has quite a few unusual and surprising pieces, compared to previous auctions, especially Greek fractions.

The sale begins, as ancient sales tend to do, with 21 lots of Celtic coins; then there are Greek coins (lots 22-497), Roman Provincial (498-582), Roman Republican and Imperial (583-684), Byzantine (including seals, 685-788), a variety of other pieces including Islamic and Medieval and early modern European (789-851), and multiple lots (852-888). There are rare, interesting and intriguing coins in every area, but before we get to them we have a surprise for you, our attentive readers and collector friends: all the entries in this sale have been written by our experts, each using his own distinctive dialect of English! That’s right, Helleno-Anglika, Wienerisch, and Peachtree! We hope you will find this delightful and amusing, but also replete with the acute numismatic scholarship you have come to expect of us. Now, here are a few that I think are particularly intriguing…

Lot 104 (Starting Price: 75 CHF) comes from the town of “Fox Island” (Alopekonnesos), which sounds like it should be somewhere in the Gulf of Maine! It is quite rare and it will certainly make some collector very happy!

Sometimes tiny coins can be impressive, and lot 241 (Starting Price: 200 CHF), which is only 7 mm in diameter and comes from Kyzikos really proves the rule! We have a very tough looking fish on the obverse: he is a tuna even though he has what seems to be a plethora of spiny fins. He could be a modern-art fish rather than one from the 6th century BC: he has quite a personality!

Lot 243 (Starting Price: 500 CHF) is another really nice coin from Kyzikos, this time a hekte. Bearing a fierce looking gorgon’s head, this type is best known from the staters but as a hekte it seems more endearing and approachable. In fact, there seem to be two varieties of the hekte, both with the same Von Fritze number, 129: the present type, with a rather tall, pear-shaped head, and another with a rather more oval and more flattened version, which seems stylistically slightly later (as Nomos 12, 2016, 90).

Lot 313 is a hemiobol (Starting Price: 50 CHF), which we have suggested might come from Assos in the Troad, but which almost certainly does not come from there. After all, the city’s 5th century coinage bears a griffin and the 4th century issues have a helmeted head of Athena: neither have two Corinthian helmets. Even worse, the inscription, read as ΑΣ, seems actually to be composed of an Α followed by what looks like an ΜΕ monogram (there is a clear arm extending from the upper righthand side of the M, and there is possibly another extending from the lower right). In other words, this is really a very intriguing and important coin! It is also one of those conundrum coins: we can read the inscription but we do not know what it means!

In fact, there are quite a few conundrum coins in this sale! Here we have an electrum 1/24th stater from an uncertain mint in the area of Ionia (lot 364, Starting Price: 200 CHF). Lions were a very popular type on early electrum coinage, so the roaring fellow on this piece is by no means unexpected. However, the parallel cited by our intrepid cataloguer, blazing trails into uncharted territory, is actually only a parallel because it too has a lion’s head on one side and an incuse on the other; but, alas, both the head and incuse are completely different from the one here. Nevertheless, this lion is a particularly ferocious fellow, though he will be perfectly tame if given a good home.

Lot 387 is another lion’s head (or maybe a panther’s), this one on a tiny (6 mm, 0.22 g) tetartemorion from Miletos (Starting Price: 50 CHF). What is fascinating is rather heraldic way it is presented, on what almost seems to be a triangular shield with rounded corners.

This curious little hemiobol (lot 422, Starting Price: 100 CHF) is of a type that was first published in 2012 in Kadmos 51 (though examples seems to have been known earlier but were never properly identified). It is apparently Lydian, has a male head on the obverse and a wheat grain on the reverse, and bears the Lydian inscription Ibfelim, which apparently means “I am <the coin> of Ifes”. Given the wheat grain on the reverse it has been suggested that Ifes was involved in the production of grain-based beverages; almost certainly this name, in its modern spelling, is used today for a variety of Turkish beer.

This coin, our final lot for today, is lot 483 – Starting Price: 200 CHF – and it is nothing short of absolutely spectacular! In fact, had I seen it BEFORE it went into Obolos it would have gone into a Nomos auction! What we have here is very rare portrait bronze of the Elymaian king Kamnaskires II (147-139 BC), which was struck in Susa. Astoundingly enough, given where it was struck, it bears an unusually well made and particularly fine facing portrait – idealised to be sure – of the king; he is diademed (visible on some of the examples excavated at Susa) and wears a crested Boeotian helmet, of the type familiar from the extremely rare silver tetradrachms of Timarchos (c. 164-161 BC) and the more common issues of the Baktrian king Eukratides I (170-145 BC). While examples of this type in comparable condition are in Paris (le Rider knew of a total of 30 pieces, all in museums: 3 in Tehran, 24 from Susa in Paris, and 3 in the British Museum), this is not only the finest of the very few that have ever appeared for sale, it also bears what is surely the best preserved obverse of them all!

All lots of Obolos 22 can be found in the online catalog.