February 24, 2011 – On February 23, 2011 the Austrian Mint issued a 20 euro silver coin celebrating the life of explorer and Imperial Botanist Nicholas von Jacquin. This coin is part of the European series, which includes 8 countries that are issuing a coin this year as part of the “Europa Star” program.

The obverse of the coin depicts a three quarter portrait of Jacquin in the upper left half of the design field, along with a carefully detailed depiction of the plant “iris variegata” one of his many discoveries, to the right. Beneath the name of the botanist “Jacquin,” is the privy mark of the “Europa Star” program. This side of the coin also depicts the country of issue “Republik Oesterreich”, Republic of Austria, the face value of 20 euros as well as the year of issue 2011. This side of the coin was designed by mint engraver Helmut Andexlinger.

The reverse of the coin shows Jacquin on a tropical island in the Caribbean. Large banana leaves, as well as a parrot are seen on left side of the design. The tall-masted sailing ship can be seen at anchor in the background. Jacquin is depicted writing his notes on some of the many plant species he identified, some of which no longer exist today. Chief mint engraver Thomas Pesendorfer designed the reverse of the coin. 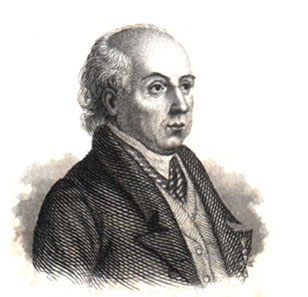 Nicholas von Jacquin was born in Leiden, in the Netherlands in 1727. On the recommendation of her personal physician Gerard van Sweiten, also a Dutchman, he was invited by Emperor Franz I, husband of Empress Maria Theresa, to come to the Habsburg Empire and work as a botanist.

One of the earliest expeditions overseas of the Imperial Navy took place during 1755 to 1759, and carried Nicholas Joseph Jacquin to the Caribbean, the Antilles, Venezuela and Columbia on the instructions of Emperor Franz. Jacquin brought back animals and plants for the zoo and botanic gardens at the Imperial palace of Schönbrunn. 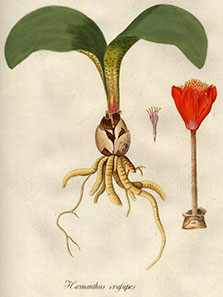 Haemanthus coccineus L., one of the rare plants that could be found at the botanic gardens of Schönbrunn. From “Plantarum Rariorum Horti Caesarei Schoenbrunnensis Descriptiones Et Icones”. Source: Wikipedia.

In 1768 Jacquin was appointed professor of botany and chemistry and became director of the botanical gardens at the University of Vienna. Under the generous patronage of Francis I and the direction of Jacquin, the gardens of Schönbrunn grew to be the most celebrated in all of Europe during this era. Much of what he brought back from his travels as well as what grew in the extensive gardens and lush greenhouses of Schönbrunn were the inspiration for the beautifully illustrated “Florae Austriacae”. In 1774 he was knighted for his comprehensive contributions.

Jacquin had three children. His younger two, a boy and a girl, were friends of Amadeus Mozart. Mozart gave Jacquin’s daughter Franziska piano lessons. Mozart felt very comfortable and welcome by the Jacquin family and therefore composed a number of songs for his friends as well as dedicating several of his works to the Jacquin family.

The Europa Star Program is a cooperation between several member mints of the European Union, which have agreed to issue coins celebrating common aspects of European identity.  The issuing of coins is not restricted to countries that issue euros but the participating countries must be European Union members. The distinguishing features of the Europa Star series is that the coins must be at least 900 fine, crown size and bear the privy mark “Europa Star”, a star surrounded by an “E” to represent the European Union. The privy mark should be a clearly distinguishable mark of the coin’s design. This year the theme chosen by the 8 countries issuing a coin for the program is “European Explorers.” The explorer honored on a participating country’s coin must have been a European or conducted their exploration on behalf of a European nation. The eight European countries that will be issuing a coin for the 2011 series are: Austria, Belgium, Finland, France, Ireland, Italy Portugal and Spain. Each of the coins is available from the regular retail outlets for each of the respective participating Mints.

If you want to have a look into the books of Nicholas von Jacquin, please click here.

If you want to take a stroll through the botanic gardens of Schönbrunn, click here.