March 3, 2011 – A comprehensive list of new commemorative coins struck by the Perth Mint reached us recently.

The Treasures of Australia series celebrates the wealth of Australia’s natural riches. The 2011 release features a mother of pearl locket containing a lovely keshi pearl. 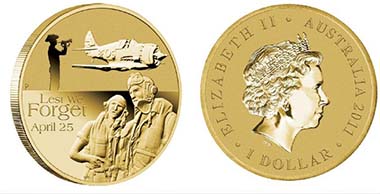 The 2011 ANZAC $1 Coin honours all those who served and continue to serve in the Royal Australian Air Force (RAAF), reflecting the true spirit of the ANZACS.

After the sell out success of the Battle of Salamis, Famous Naval Battles has proved a highly popular theme. The fifth release in this stunning sea-faring series features the Battle of Midway (June 1942). The pad-printed colour reverse really captures all the drama of this landmark naval event.

Also proving popular plunder is the Young Collector’s pirate-themed $1 coins. The third release depicts Calico Jack, whose real name was John Rackham. Rackham was born in England in 1682, and is most remembered for the design of his Jolly Roger flag – a skull with crossed swords.

The final release in the Great Composers series features a 1oz silver proof coin celebrating Franz Liszt (1811 – 1886). Liszt is considered to have been one of the greatest pianists of all time. He was also an important composer, teacher and inventor of the symphonic poem.