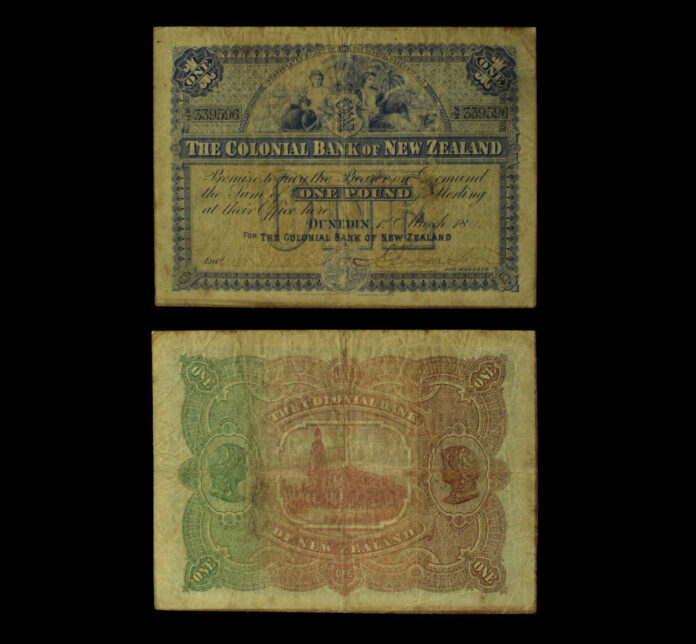 Mowbray Collectables 27th International Numismatic Auction in Wellington, New Zealand offers a record catalogue of $NZ 522,650 ($US 371,081) in 590 lots with major New Zealand rarities. One of about three Colonial Bank One Pound banknotes of 1891 is estimated at $NZ 8,000 in grade Fine. The bank’s failure by 1895 made these notes the rarest of New Zealand’s six active private banks. Another rare note is a National Bank of Scotland 1901 Pound, 15 May 1901, a previously unknown date, about Fine. New Zealand pattern coins of the 1980’s trialing new obverse designs by designers James Berry for the 1982 Dollar with the Fantail Bird reverse, 1982 Cent & Raphael Maklouf for the 1986 Dollar with the Black Robin Reverse are sufficiently rare that they are omitted from catalogues. Two scarce 1935 Waitangi Crowns are included.

The auction offers many English coins from William I onwards, including an 1847 Gothic Crown and 1863, die 4, penny. Many gold coins are on offer. Ancient coins include a Titus aureus (RIC 859) and Roman denarii. Nine German coin lots include a 1521 Teutonic Order Groschen, Neumann 40, VF and there are eleven Netherlands lots.

September, 5. 2019
Mowbray’s auction has 776 lots, with 179 lots of New Zealand coins, banknotes and medals. A strong feature is British and French medals from 1633 onwards and especially from the Napoleonic Wars period.
error: