February 20, 2014 – On 30 January 2014, the Federal Mint Swissmint has launched a new commemorative coin for coin enthusiasts and collectors. The silver coin ‘50 years of the Patrouille Suisse’ depicts the aerobatic team of the Swiss Air Force.

For the past 50 years, the red and white aircraft of the Patrouille Suisse have been thrilling a wide audience in Switzerland and abroad with their displays at military and civil aviation events. The Switzerland’s Air Force’s aerobatic squadron has become a hallmark for Switzerland and its proverbial precision, and showcases not only the armed forces, but the country as a whole.
Although founded on 22 August 1964, the origins of the Patrouille Suisse date back to 1959. It was at this time that the idea of forming a demonstration team with professional pilots was first pursued. In 1964, as part of the national exhibition in Lausanne and to mark the 50 years of the Swiss Air Force’s existence, anniversary displays were put on throughout the country to the delight of hundreds of thousands of spectators. Inspired by the ‘Patrouille de France’, the Swiss aerobatic formation, consisting of four Hawker Hunter Mk58 aircraft, immediately adopted the name ‘Patrouille Suisse’. Since 1978, the aerobatic team has consisted of six aircraft. In 1994, the Hunter was replaced by the faster and more manoeuvrable F-5E Tiger II and built-in smoke generators help to boost the dramatic effect. Yet even without the smoke, the daring displays have an almost heartstopping effect on many a spectator.
To mark the anniversary, the Swiss Air Force is putting on a major flying display in Payerne, AIR 14, on the last weekend of August and the first weekend of September this year. Two other anniversaries are being commemorated at the same time as ‘50 years of Patrouille
Suisse’: ‘100 years of the Swiss Air Force’ and ‘25 years of the PC-7 TEAM’. 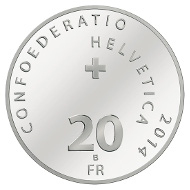 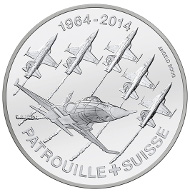 To mark the anniversary, Swissmint is issuing a silver commemorative coin with a face value of 20 francs. Designed by the Swiss illustrator Angelo Boog, the coin is available in the minting qualities ‘uncirculated’ and ‘polished proof’ in a presentation case.

Born in Glarus in 1957, Angelo Boog grew up in Kaltbach in the Canton of Lucerne. Inspired by books of fairy tales and legends, he began to draw at a very early age. Art reproductions on cover pages of the Beobachter magazine kindled 8-year-old Angelo’s desire to become an artist. He discovered his love of fantasy illustration with the comic book ‘Bessy’. Among his great role models are Otto Ubbelohde, Edmund Dulac, John Bauer and Franklin Booth.
As a self-taught artist, Angelo Boog received his first commissions for paperback covers while still in his adolescence. In 1982, the Benedikt Taschen Verlag publishing house acquired the rights to print his first self-financed portfolio. 1982 also saw the appearance of a first art book of his fantasy works, another, more comprehensive edition was issued in November 2013.
Angelo Boog attained his artistic education by way of a detour as a typographer. He graduated from Zurich University of the Arts in 1999 after a four-year course of studies to become a scientific illustrator. Today he is a renowned, free-lance illustrator, living with his family not far from Zurich. He serves a discerning clientele including the NZZ-Folio, the Swiss Post (10 stamps), the Principality of Liechtenstein Post and the popular science sectors for which he produces advertising. He also continues to nurture his love of fantasy art under his full first name ‘Pierangelo’.

For more information on these coins please go to the website of SwissMint.

You can find the dates of forthcoming flying displays and all further details on the official website of Patrouille Suisse.

The official trailer may give you an idea of the pilots’ skill.

If you want to get an idea of Angelo Boog’s whole range of artistic production go to his website.