April 12, 2012 – On April 11, 2012 the Austrian Mint has issued the fifth silver coin in the intriguing “Rome on the Danube” series. The Roman Empire was certainly very powerful and influential in many regions of Europe; today’s Austria was no exception. Much of this was because of the Danube River, one of the key transportation links in the network of European rivers. Along the Danube the Romans established or adopted earlier settlements that thrived under Roman rule. Many of these settlements are still important hubs of transportation and economic contributors of Austria today, some 1500 years later.

The obverse of the coin was designed by the mint’s Chief Engraver, Thomas Pesendorfer and features a portrait of Christian Emperor Flavianus. Behind him stands St Florian, the patron saint of the Austrian firefighters, holding a flag, a millstone and a palm frond, symbol of martyrdom. The waves represent the Enns River along which the settlement was located. The obverse of the coin along the outer edge also bears the country of issue “Republik Oesterreich,” Republic of Austria, the name of the emperor “Kaiser Gratianus”, as well as the 20-euro face value. The year of issue 2012 is centered in the lower half of the design field under the name of the settlement, Lauriacum.

The reverse of the coin shows a Roman “agrimensor”, or surveyor, overseeing the construction of a bridge while taking measurements with the help of a “groma.” On the table to his right side, plans and other geometrical tools lie on a table at his side. The groma, also known as a surveyors cross, was the principal Roman surveying instrument that was used to survey straight lines and right angles. In the background are several buildings, part of the extensive military establishment that was located in Lauriacum. Mint engraver Helmut Andexlinger created and engraved this side decided to feature the river, bridge building and roads in general, since the city of Lauriacum was a key hub of transportation both along the river and the roads of this region.

Lauriacum is located at the mouth of the Enns River where it flows into the Danube River, where today’s twin cities of Lorch and Enns are located. Enns is the oldest city of Austria, and a nearby village still carries the name of Lorch, based on its Roman history. The intersection of the two rivers here has made this location very strategic since the beginning of time. The first settlement is thought to have been here about 4000 years ago during the time of the Celts. It was a key location in the “Limes” a line of defence built by the Romans that stretched from England along the Rhine River to the mouth of the Danube River. Lauricum had over 6,000 soldiers and 30,000 residents by the time Rome granted Lauricum city status. 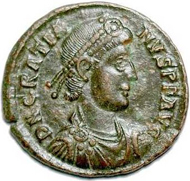 The Emperor Flavius Gratianus was born in what is now known as Serbia in the year 359 A.D., and he died in Lyon France in 383 A.D. He was Emperor of the western region of the Roman Empire from 375 to 383. He was seen as a very fair and formal emperor but one who was not particularly interested in politics, and depended greatly on his advisors. Emperor Gratianus visited Lauriacum in 378 A.D. 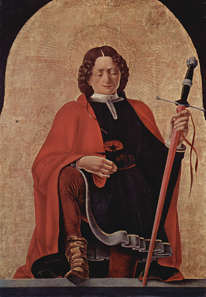 Florian was a Christian soldier working in the city of Lauriacum, who was forced into retirement because of his Christian beliefs. During this time some 40 Roman soldiers were imprisoned because of their Christian beliefs. Florian decide to try and help them, and he refused to renounce his Christianity to a Roman military commander during Christian purges in AD 304. The Emperors of the time, Diocletian and Maximian, had a millstone tied around Florian’s neck and then had him drowned on May 4, 304 A.D. in the Enns River at Lauriacum. It was only some short nine years after this, that Emperor Constantine I proclaimed religious tolerance. A Christian basilica was built around 370 A.D. on top of what was the Roman temple of Jupiter.
It was not until around 420 A.D. that the city of Lauriacum began to dwindle largely due to the heavy losses that the then Emperor Flavius Constantinus suffered in the west, and the loss of North Africa. Many soldiers withdrew as public funds for their defence work along the limes disappeared.

The new silver coin has a face value of 20 euros, is struck in proof quality only and a maximum mintage of 50,000 pieces. The coins are struck in 900 fine silver and contain 18 grams of pure silver. Each coin has a diameter of 34 mm, is encapsulated and comes in box with an individually numbered certificate of authenticity.
A wooden case for the whole collection of six coins, decorated on the top with a facsimile of a Roman sestertius coin with a portrait of the Emperor Marcus Aurelius (161-180 A.D.) is also available.

More information on this and other coins of the “Rome on the Danube” series you can find on the Austrian Mint website.