May 19, 2011 – Throughout its long history, the Near East has been at the center of some of the most important political and religious developments in world history. A new exhibition, organized by the American Numismatic Society in conjunction with the Federal Reserve Bank of New York, illustrates the economic and religious aspects of the coins of this area. From the very beginnings of coin production in the region in the 4th century BCE, the designs on coins show the ethnic and religious diversity of the various civilizations.

Most of the coins on display are from the collection of Abraham and Marian D. Scheuer Sofaer. During more than three decades of assembling their collection, the Sofaers carefully acquired a multi-cultural representation of coins that includes ancient Jewish coins, Christian coins of the Byzantine and Crusader Periods, and Islamic coins minted in the area. The scope of the collection ranges from the fifth century B.C.E. to the 13th century C.E. and includes some of the greatest rarities struck in Jerusalem and throughout the region. 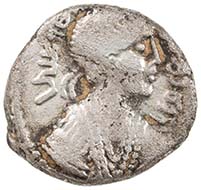 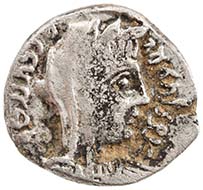 Rabbel II, A. D. 70 – 106. Silver drachm with portrait of Rabbell II and “Rabbel the king, king of the Nabataeans, year 1” and Shuqailat and “Shuqailat his mother, queen of the Nabataeans.” Legends in Nabataean Aramaic. ANS Collection, Gift of Abraham Sofaer (Sofaer Nabataean 77).

On display are over 300 coins and objects, which illustrate topics such as Christian and Jewish symbols, coins and Jesus, the Jewish Wars, the Arab tradition of coinage, as well as Byzantine and Crusader coinages. In particular, the coins of Jerusalem illustrate how different people tried to claim the city by giving different names – in Hebrew, Greek, Latin, and Arabic – or symbols to the Holy City. 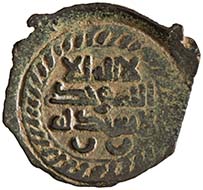 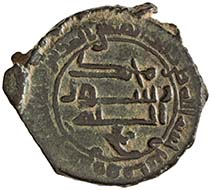 Reflecting on his collection, Abraham Sofaer notes that “These coins represent a geographic area that is unique in the totality of its cultural and ideological variety and significance. The Holy Land has been fought over by various empires for some 3,000 years. The Holy Land has almost always been a province of one of the area’s major empires, since about the sixth century B.C.E., when coins were first minted there, until the State of Israel was declared. But it has been a province rich in human drama, social and political upheaval, cultural and religious diversity, commerce, and creativity. Consequently, while lacking the military, political, artistic, and economic dominance of the empires which controlled it, Holy Land numismatics is intellectually and artistically rewarding.

Abraham Sofaer is a former Federal District Judge of the Southern District of New York. He was Legal Adviser to the U.S. State Department under Secretaries of State George P. Shultz and James A. Baker, III. He is currently the George P. Shultz Senior Fellow at the Hoover Institution, Stanford University. Last year Sofaer and his wife Marian donated a significant part of their collections to the American Numismatic Society and the Israel Museum in Jerusalem. Dr. Ute Wartenberg Kagan, Executive Director of the American Numismatic Society, commented on the exhibition, “It is rare to find a collection of such intellectual breadth and historical importance. We are very grateful to Abe and Marian Sofaer for their generosity in sharing this collection in this groundbreaking exhibition.” 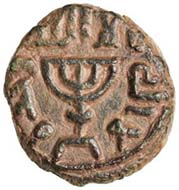 Christian and Jewish Symbols: Cross, Chi-Rho, and Menorah. Contained in this display is Sofaer’s example of the famous and rare menorah coin of the last Hasmonean king, Mattathias Antigonus (40-37 B.C.E.). Fewer than 25 examples of this coin are known to exist, and Sofaer’s is among the best preserved. It depicts the golden menorah from the Jerusalem Temple, along with another sacred object, the Showbread Table. It was forbidden to duplicate religious objects from the Temple, but Antigonus deliberately used them as a propaganda tool designed to rally the Jewish people to fight more vigorously to protect the sanctity of the Temple and its High Priest against Herod and his Roman supporters who, nevertheless eventually won. 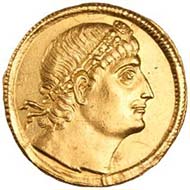 Constantine the Great (307-337 C.E.) was the first Roman emperor to use a Christian symbol on coins. On October 28, 312 C.E. Constantine fought against his rebellious co-Emperor Maxentius at the Milvian Bridge outside of Rome. Prior to the battle Constantine had a dream in which he saw a cross of light above the sun with the Greek words that translated into Latin as IN HOC SIGNO VINCES or “In this sign, you will conquer.” The sign was described as the Greek letters Chi (X) and Rho (P) superimposed on each other. Constantine ordered this sign to be inscribed on the helmets and shields of his soldiers, and he won the battle. He believed his success was due to divine protection, and he converted to Christianity. The chi-rho symbol, also called a Christogram, first appeared on a coin of Constantine. Later, Theodosius I (379-385 C.E.) used the symbol of the cross on coins for the first time. Of course, this cross corresponded to the cross upon which Jesus was crucified by the Romans on the hill of Golgatha in Jerusalem. Quickly the cross became the pre-eminent symbol of Christianity.
This display also contains other ancient objects showing the menorah, chi-rho and cross, including oil lamps, seals, amulets, and large crosses. 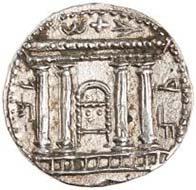 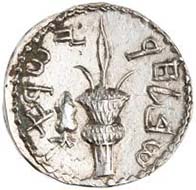 Jewish History on Coins is featured in two cabinets. The coins struck in the ancient Holy Land between the fourth century B.C.E. and the second century C.E., provide a primary source of information about the history, heritage, and emerging culture of the Judeo-Christian tradition. This display contains coins of the Hasmonean (Maccabean) and Herodian kings, the procurators of Judaea under Rome, and a remarkable collection of coins of the Jewish War and the Bar Kokhba revolt. Among the many wonderful coins here one may see the best preserved example of a silver half-shekel from the fourth year of the Jewish War, 68/69 C.E. It is one of fewer than ten known examples. The Jerusalem Temple is displayed on the silver sela’im (tetradrachms) of the Bar Kokhba Revolt (23), which took place only 62 years after the Temple was destroyed, so the images may well have been created by people who saw the Temple or contemporary drawings of it.

The Coins Jesus Knew. There is no doubt that the coins of his time can help us to better reconstruct some portions of the world in which Jesus lived. According to the Gospels, Jesus was well aware of the importance of money, whether coins or other forms of currency. During Jesus’ lifetime, bronze coins of various denominations were manufactured in the Galilee, Judaea, and Samaria, and many silver coins circulated in these areas even though none were manufactured there during this period. It follows that as a man widely traveled in these lands; Jesus was familiar with the use of money, including coined money in both large and small transactions. This exhibit displays Tyre shekels and half shekels, which were mandated for use as the annual Temple tribute, and probably made up the 30 pieces of silver. Also featured are coins of all of the rulers of the Holy Land from the time of the birth of Jesus during the reign of Herod I through the lives of his disciples. These include coins of Herod Antipas who Jesus called “that fox” (Luke 13:32); Herod Archelaus (Matthew 2:22), Aristobulus King of Armenia with an excessively rare portrait of Salome, who asked for the head of John the Baptist after her dance pleased Antipas (Mark 6: 22-25); Philip (Luke 3:1); Agrippa I (Acts 12:1-2), and procurators such as Pontius Pilate (see Matthew 27:2). 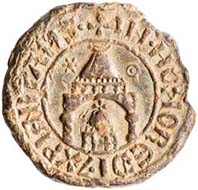 Arabs in the Holy Land. The Nabataeans were ancient Arabs of the southern Levant and Northern Arabia, who became wealthy by controlling supplies of frankincense and bitumen. Matthew 2:11 notes that three precious gifts were given by magi on the birth of Jesus, “…they presented unto him gifts; gold, and frankincense, and myrrh.” It is thus sometimes assumed that a Nabataean king or prince was one of the magi, but there is no confirmation in any sources.

After the last Nabataean king, Rabbel II, whose rule ended in 105 C.E., there were no Arab coins minted in the ancient Holy Land until those struck under the Umayyad Caliphate in the 7th century C.E. The display shows a sampling of Sofaer’s diverse collection of Umayyad, Abassid, Ikhshidid, Qarmatian, and Fatimid Dynasty coins, all struck at various mints of the Holy Land including Jerusalem, Acre, Joppa, Tiberias, Ascalon, Saffuriyya, and Gaza among others.

Gods, Goddesses, and Monuments on the City Coins. Even before the first Maccabean coins, important cities in ancient Israel struck coins. Many more were issued after Augustus, when Roman authorities gave minting privileges to certain cities. These powers were granted to promote both loyalty to Rome and commerce in the area. The city coins also developed as a means of local economic, political, and cultural expression. Sofaer’s city coins are among the jewels in his remarkable collection, and the book of his collection, being published soon by the ANS, will be the reference of choice for city coins of the Holy Land for many decades if not generations. 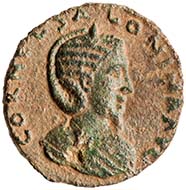 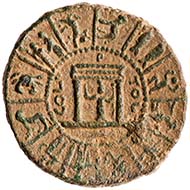 This exhibit highlights around 50 city coins from the Sofaer Collection, which include a remarkable coin of Akko struck under Salonina, wife of Gallienus (253-268 C.E.), showing Zeus Heliopolites in a shrine, surrounded by a Zodiac wheel, containing the various signs of the Zodaic. Persius holding the head of Medusa appears on a rare coin of Joppa. Among Sofar’s most amazing city coins is a bronze of Neapolis struck under Philip I and Philip II (244- 249 C.E.), which depicts the two phases of the binding of Isaac, with Abraham offering his bound son to a local god combining Jehovah and Zeus. 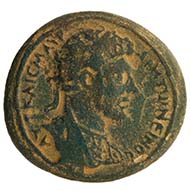 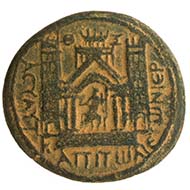 A large architectural bronze of Capitolias in the Decapolis, struck under Marcus Aurelius (161-180 C.E.) shows the facade of an ornate temple with four columns, a central arch between two fortified towers, and a bastion in the background, with Zeus seated within. 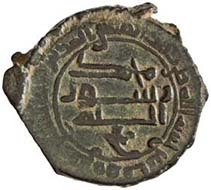 Coins of Jerusalem. The final display features coins of Jerusalem, which has been a city of importance since the earliest days of recorded history. Mints located in Jerusalem produced coins beginning during the Persian Period in the mid-fourth century B.C.E. Many of the coins struck in this holy city mention Jerusalem by name – and in the numismatic evidence the city has many names – in paleo-Hebrew, Greek, Latin, and Arabic. Other coins illustrate symbols of the city such as the lily, and still others show some of Jerusalem’s most important buildings, including temples, churches, mosques, citadels, and gates. Some of these structures still exist today in modified form; others have been destroyed as each faith and ruling group tried to eliminate the previous cult center in order to establish its own.

Thus we find here coins of the Maccabees and the Jewish War struck in Jerusalem; coins of the Bar Kokhba revolt expressing a longing for Jerusalem; Roman provincial coins celebrating the re-founding of Jerusalem as “Aelia Capitolina” under Hadrian (the first of 16 emperors to order coins struck at the Jerusalem mint); rare Byzantine coins naming Jerusalem; Islamic coins referring to Jerusalem as “Ilya” or “al Kuds;” and Christian Crusader coins depicting the Church of the Holy Sepulcher and Tower of David.

For further information on the exhibition, opening times, location and the American Numismatic Association in general visit this site.

If you want to know more about the ANS, click here.

If you want to know more about the curator of the exhibition, David Hendin, click here.

He has written an impressive book called “Guide to Biblical Coins”. If you want to know more about it, click here.

There are also some very exciting articles of David Hendin on his website. For reading them, click here.