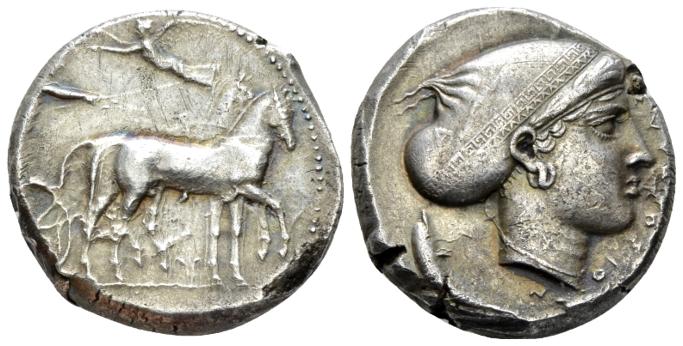 Naville Numismatics Live Auction 48 features a selection of 658 lots of Greek, Roman, Byzantine coins, all chosen with contribution from NAC’s experts. The sale will close on 7 April 2019, 16.00 UK time, at which time the live session will begin. Absentee bidders can bid electronically through Naville Numismatics website from the day the sale is published online up to the start of the live session.

This section of the sale includes coins offers an attractive series of coins from Neapolis, Tarentum, Heraclea, Metapontum, Syracuse, Larissa, Athens and Corinth, even beyond a selection of Hellenistic portraits of Seleucid, Parthic and Ptolemaic kings.

Highlights include a wonderful tetradrachm of Syracuse, a rare trite of Sardes and a beautiful diobol of Cleopatra VII.

The Imperial selection of the sale features an attractive series of Augustus, an aures of Claudius with the Victory on reverse, an interesting series of Nero, a rare aureus of Vespasian with the Fortuna on reverse, an extremely rare dupondius of Trajan with the column on reverse, an interesting sestertius of Pupienus, a beautiful sestertius of Gordian III, even beyond a selection of solidi, siliquae, denarii, tetradrachms, sestertii, dupondii, asses and folles, some of them from an old Canadian collection and from the M.J. collection, which includes Claudius, Nero, Galba, Vitellius, Vespasian, Domitian, Trajan, Hadrian, Antoninus Pius, Faustina I, Marcus Aurelius, Commodus, Septimius Severus, Caracalla, Elagabalus, Gordian III, Philip I, Philip II, Trajan Decius, Trebonianus Gallus, Postumus, Diocletian, Carausius, Allectus, Maximianus I, Constantius I, Galerius, Severus II, Licinius I, Constantine I, Julian II, Jovian, Valentinian I, Gratian, Magnus Maximus and Flavius Victor.

In addition the auction presents an interesting selection of Byzantine, among with a very rare semis of Maurice Tiberius for Alexandria, Medieval and Modern World coins.

The Roman Provincial part of the sale includes a selection from the Dattari Collection. It is composed of Alexandrine coins from Octavian to Galerius with various types of obols, diobols, hemidrachms, and drachms featuring rare portrayals of ancient divinities.