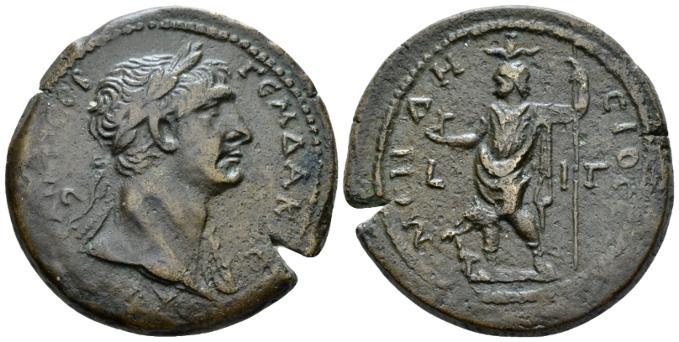 Naville Numismatics Live Auction 54 features a selection of 690 lots of Greek, Roman, Byzantine coins, all chosen with contribution from NAC’s experts. The sale will close on Sunday 15 December 2019, 16.00 UK time, at which time the live session will begin. Absentee bidders can bid electronically through Naville Numismatics website from the day the sale is published online up to the start of the live session.

This section of the sale includes coins offers an attractive series of rare and beautiful coins from Tarentum, Metapontum, Velia, Catana, Naxos, Syracuse, Athens and Corinth, even beyond a selection of Hellenistic portraits of Seleucid, Parthic, Sasanian and Ptolemaic kings.

Highlights include an interesting stater of Alexander III (Ex CNG e-sale 226, 2010, 107), a well struck stater of Lysimachus and a very rare stater of Magnesia ad Meandrum.

The Imperial selection of the sale features an attractive series of Augustus, a very beautiful sestertius of Tiberius (Ex NAC sale 84, 2015, 1751), an aureus of Nero with the Salus, an interesting aureus of Faustina Senior, an extremely rare medallion of Commodus, a well struck denarius of Pescennius Niger, a beautiful solidus of Valens from the Ebert collection (Ex Stack’s sale 174, 2013, 2077) and a rare solidus of Gratian (Ex CNG e-sale 226, 2010, 571) even beyond a selection of solidi, siliquae, denarii, tetradrachms, sestertii, dupondii, asses and folles, some of them from an old Canadian collection and from the M.J. collection, which includes Claudius, Nero, Galba, Vitellius, Vespasian, Domitian, Trajan, Hadrian, Antoninus Pius, Marcus Aurelius, Commodus, Septimius Severus, Caracalla, Geta, Elagabalus, Gordian III, Philip I, Philip II, Trajan Decius, Diocletian, Maximianus I, Constantius I, Galerius, Licinius I, Constantine I and Valentinian I.

They are also remarkable such as a very rare and in extremely good condition follis of Nepotian.

In addition the auction presents an interesting and beautiful selection of Byzantine, Medieval, Modern World coins with important highlights and some interesting books, including the Geschichte des römischen Münzwesens of Theodor Mommsen.

December, 2. 2021
Naville Numismatics features in its new Live Auction 70 a selection of 652 lots from Greek to Modern coins, all chosen with contribution from NAC’s experts. The sale includes coins from the E.E. Clain-Stefanelli collection sold in association with Stack’s Bowers Galleries.
error: