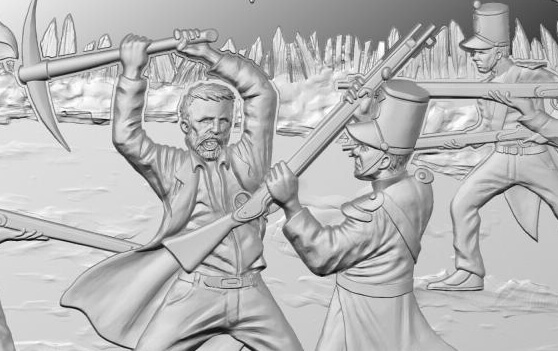 The Royal Australian Mint has launched the first coins of a new limited edition commemorative coin series, featuring the mutiny on the HMS Bounty, The Rum Rebellion and The Eureka Stockade at the National Maritime Museum in Sydney.

“This unique and artistically detailed coin series acknowledges historical events and people from Australia’s tempestuous colonial era, a time that resulted in mutiny and rebellion but contributed to eventual egalitarian democracy and rule of law in our nation,” said Mr Cartwright.

Dr Nigel Erskine, said the release of the Mutiny on the Bounty five and one dollar coins is testimony to the continuing fascination in our own time, with the life of William Bligh – the subject of a new major exhibition ‘Bligh – Hero or Villain’ opening at the museum in July.

“In an era that witnessed the American War of Independence, the French Revolution and the rise and fall of Napoleon Bonaparte, William Bligh’s story would have been largely unremarkable had it not been for a mutiny aboard his ship, the Bounty, that made his name a household word and his actions the subject of fierce controversy that followed him for the rest of his life,” said Dr Erskine.

“It was a privilege to design and sculpt the ‘Mutiny and Rebellion’ coin series. Using state-of-the-art software and hardware often used in the video game and film industry, I was determined to capture this part of our history as creatively as possible with the sense of capturing a moment in history as if it were being photographed using the extremely high fidelity that this technology can achieve,” said Mr Ball.

William Bligh played an important role in both the Mutiny on the Bounty and the Rum Rebellion at a time when the new continent was still seeking a generally accepted currency. Learn more about how a clever man – not our Lieutenant Bligh, unfortunately – came up with the idea of turning one coin into two in this CoinsWeekly article.

This CoinsWeekly article tells the story of the Rum Rebellion.

And if you want to know, what kind of people were condemned to Down Under, read our article “Lets be merciful and hang them: The Catherine Heyland Case”.

This Telegraph article tells you more about the Mutiny on the Bounty.

And this video published by the National Museum of Australia illustrates the history of the Eureka Stockade.