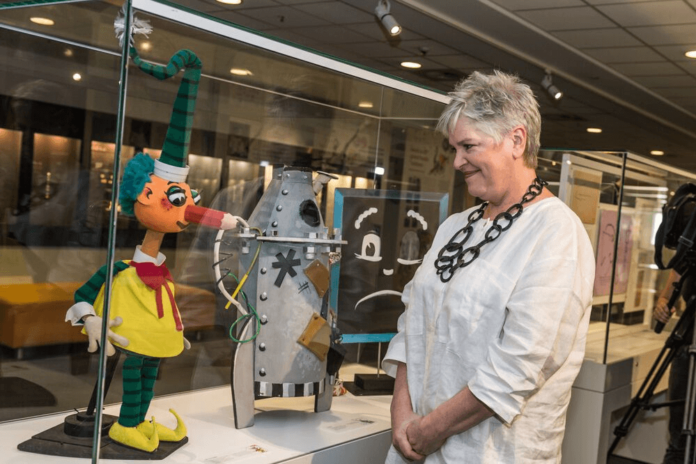 ‘The exhibition showcases one of the most loved and longest running Australian children’s programs, honouring Norman Hetherington, the brilliant man behind the iconic puppets and television series,’ the Mint CEO said.

‘The Mint is opening this vibrant and meaningful exhibition to share the story behind Mr Squiggle and the recently released coin collection, with the public.’

Rebecca Hetherington, daughter of Mr Squiggle creator, Norman Hetherington and former host of the television series said ‘people are going to get a glimpse at some special items from my father’s collection. There’s a lot to choose from as my father liked to keep things but I think the Mint has chosen some gems to be part of this exhibition. I hope that visitors to the Mint really enjoy a nostalgic glimpse of my father’s work and Mr Squiggle himself.’

In February, there was a release of four $2 commemorative coin designs through their registers nationwide portraying Mr Squiggle and his friends Gus the Snail, Bill the Steam Shovel and Blackboard.

A limited release of a collectable coin album is available and in addition to the four $2 coins, it includes two $1 coins and a special 1 cent coin.

The ‘Mr Squiggle the Man from the Moon: Celebrating 60 years of Mr Squiggle and his creator Norman Hetherington’ exhibition will be at the Mint during opening hours from 28 February until 28 July 2019.

In case you are not familiar with Mr Squiggle, here you can watch the first episode from The Moon Series.