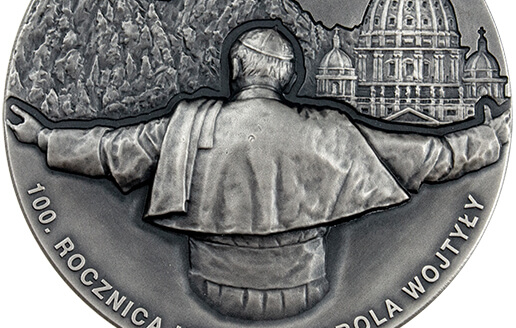 The late Pope John Paul II continues to be a source of inspiration for many, including artists who create timeless mementos of his life and pontificate. In tribute to one of the greatest Poles in history, on the initiative of the Mint of Poland a commemorative coin “Karol Wojtyła in Memoriam – 100th Anniversary of the Birth” was designed by Polish artists. Like all Mint of Poland’s products, the new coin is a combination of excellent craftsmanship and cutting-edge technology. It has also attracted great interest from collectors – the entire limited edition has already been sold out.

The design of the coin created to commemorate Pope John Paul II on the centenary of his birth presents a clear and expressive artistic concept joining the motif of his beloved Tatra mountains with St Peter’s Basilica as the place of his service in the Vatican.

The combination of high relief and the wooden cross insert makes the coin a real masterpiece of the minting art. Moreover, the antique finish adds a weathered look that further emphasizes the deep sunk relief. All this makes the coin a highly unique souvenir.

The commemorative coin with the face value of 3,000 francs CFA has a diameter of 50 mm. It was minted in 100 grams of 999 fine silver. The issuer is the Republic of Cameroon.

Also, to commemorate the 100th anniversary of Pope John Paul II’s birth, the Mint of Poland created a unique gold bar, with the weight of 100 grams, in a limited edition of 100 pieces. Each coin comes with a unique serial number. The reverse depicts an image of Pope John Paul II along with his engraved birthname, Karol Wojtyła, while the obverse features the contemporary and historical signs of the Mint of Poland, as well as indication of the mass and the gold purity hallmark. To get a closer look at this small masterpiece, watch this clip:

For the coin, the bar, and further products on Pope John Paul II go to the Mint of Poland website.

Throughout the years, the Mint of Poland has released a number of commemorative coins with the image of Pope John Paul II. Here you can read the CoinsWeekly article on the relationship between the Poles and their Pope.

Are you interested in papal medals? Here you can marvel at some wonderful pieces in our record section!